Arum: Haymon, Wilder Were Wise To Walk Away From DAZN Deal

Yes, you read that correctly.

The antagonistic adversary who’s rarely shy about blasting boxing’s most mysterious figure actually applauded him Thursday. From afar, Haymon has absorbed a lot of criticism this week for guiding Deontay Wilder away from DAZN, which offered the unbeaten WBC heavyweight champion a four-fight contract that could’ve become worth $120 million.

As part of that agreement, Wilder would’ve been paid $40 million apiece for two fights with Joshua. It would’ve started with Wilder making a mandatory defense of his title against Dominic Breazeale.

Wilder instead decided to remain loyal to Showtime, which has aired each of Wilder’s past three fights, including his pay-per-view draw with Tyson Fury on December 1. Showtime will televise the Wilder-Breazeale bout May 18 from Barclays Center in Brooklyn.

The 87-year-old Arum, although affiliated with ESPN, completely supports Haymon’s position. In fact, Haymon, Wilder’s adviser, did exactly what Arum had hoped when the International Boxing Hall-of-Fame promoter learned John Skipper, DAZN’s executive chairman, attempted to lure Wilder away from Showtime and FOX by offering the Alabama-based knockout artist a nine-figure contract.

“I think Haymon,” Arum told BoxingScene.com, “and rightly so, demonstrated to Wilder that he’ll end up making more money doing it the traditional way than making a deal with DAZN, where he’s limited. I think I would’ve done the same thing. We were hoping that he would do that. We knew that Shelly knows how to count money and we thought they would see that while it looked like a tremendous amount of money, in reality, if everything broke the right way, it would be shortchanging Wilder.” 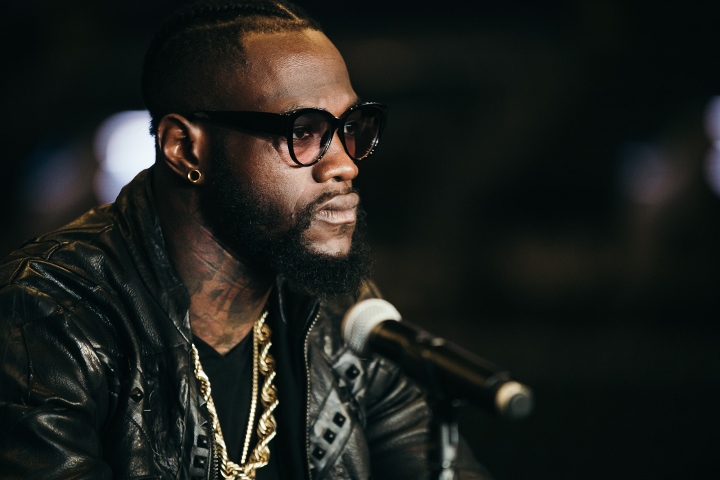 Haymon and Shelly Finkel, Wilder’s co-manager, met with Skipper last week to discuss DAZN’s interest in Wilder. Right up until Wilder’s announcement during a press conference Tuesday at Barclays Center, speculation swirled regarding which outlet Wilder would choose.

It became clear by last weekend that Wilder wouldn’t accept Skipper’s tempting proposition. Then it seemingly became a matter of which network – FOX or Showtime – would distribute Wilder-Breazeale as the main event of a pay-per-view show.

Airing Wilder-Breazeale live on Showtime was not believed to be an option because Wilder would’ve been guaranteed $20 million to battle Breazeale in the first fight of his DAZN deal. The 33-year-old Wilder (40-0-1, 39 KOs) won’t make quite that much to box Breazeale (20-1, 18 KOs) live on Showtime, but he is “generally in the same neighborhood with the financial opportunities,” according to Stephen Espinoza, president of Showtime Sports.

Wilder pointed out after Tuesday’s press conference that he has decided to trust the people, most notably Haymon and Espinoza, that helped Floyd Mayweather earn more than $700 million during his illustrious career, largely through major pay-per-view events.

Finkel explained Tuesday that they’re certain a Wilder-Joshua fight will become worth more than the $40 million Skipper offered for that fight to be streamed by DAZN.

Finkel reminded reporters that less than a year ago, Hearn offered a $15 million flat fee for Wilder to fight Joshua. Now Wilder has been offered almost three times that amount, a clear indication to Finkel that Wilder will be able to make much more than $40 million if Wilder and Joshua keep winning and eventually meet in the ring.

Arum assumes most boxing fans and media anticipate Wilder’s decision to eventually drive up his asking price to box Joshua. Not so, Arum maintains, because he is convinced Wilder will box Fury again before facing Joshua.

Arum, who tried recently to sign Wilder to a long-term contract, obviously wants that to happen because his company, Top Rank Inc., recently entered a co-promotional agreement with British promoter Frank Warren to represent Fury (27-0-1, 19 KOs). The lineal heavyweight champion will make his debut on ESPN+, DAZN’s streaming competitor, sometime in June, against an opponent to be announced soon.

Fury walked away last month from a contract for a lucrative, immediate rematch with Wilder to join Arum and Top Rank. Arum understandably is hopeful Wilder will decide to fight Fury again, rather than pursuing England’s Joshua (22-0, 21 KOs).

“He does have reasoning for that decision,” Arum said, referring to Haymon. “For example, [Wilder] is gonna get fairly decent money to fight this fight with Breazeale. And then, probably decent money to do another fight, and then Joshua and Fury would have a second fight [separately]. Then, next year, when Fury and Wilder fight, the amounts that were offered are miniscule compared to the kind of revenues that will come from a Wilder-Fury fight. That’s the theory. With Fury being built up on ESPN, and Wilder hopefully being built up by PBC – but particularly Fury being built up with the American audience, so they’ll know what a character he is and so forth – we would look to do at least two million homes when they fought each other.

Arum’s ambitious pay-per-view prognostication aside, he is confident ESPN’s expansive reach would help him and everyone else involved produce more than the reported 325,000 buys the first Wilder-Fury fight generated. The potential windfall for Wilder, Fury and everyone that works with them leads Arum to believe he and Haymon will work together to make a deal for a Wilder-Fury rematch, just like they did four years ago.

“When there’s huge money to be made in this way, even Haymon will come together to do it,” Arum said. “The best example is the Pacquiao-Mayweather fight. But knowing Haymon, he’ll only do it if there’s a pot of gold there. And my belief is, and I think his belief is there will be a pot of gold there. If it rolls out the ways I think it’ll roll out, Wilder will make a lot more than the $100 million or $120 million that Eddie [Hearn] was talking about.”

[QUOTE=doom_specialist;19756800]By what metric? Weight/money/fame/skills/etc?[/QUOTE] By fame and skill for sure.

[QUOTE=mrjoeblive;19756697]No delusions huh? So calling a fighter the next Bruce Lee is not deluded? [B]Bruce is far bigger than Floyd no one especially a boxer is going to measure up to Bruce Lee.[/B] Arum also has the nagging problem of…

[QUOTE=jdp28tx;19608791]I never said Loma and Bud were Mayweather type stars I said Arum has done a better job promoting his fighters than Haymon has promoted his own fighters. And I do not see Arum, Loma, or Bud having delusional expectations…

[QUOTE=jdp28tx;19718441]I could care less about Arum. But, ODH and Floyd left because they could actually make more money because they were super stars,not because Arum was ripping them off. Mikey never accused Arum of stealing from him. If so the…

[QUOTE=mrjoeblive;19640781]Come on how do you know what's in the mind of every fighter? Erroll Spence is one of the most humble fighters out there. So is Mickey Garcia. Arum has very few fighter because he mismanaged them. Putting them in…