In an all-Polish main event of the night, notorious heavyweight Artur Szpilka (22-3, 15 KOs) barely continued his comeback with a positive note after a thin split decision over an aging colossus, named Mariusz Wach (33-4, 17 KOs).

Szpilka was visibly smaller than Wach, but the latter was surprisingly quick at times, while Szpilka, obviously lighter and faster of the two, was sometimes caught flush on his chin.

Nevertheless, Szpilka had done enough to clinch a majority of the close rounds with his impressive (yet ineffective) offensive outbursts.

The fight was going his way, when he was finally caught by stalking Wach, put on the deck and forced to fight for his dear life. Szpilka was several times on the brink of being stopped, yet lasted till the final bell. 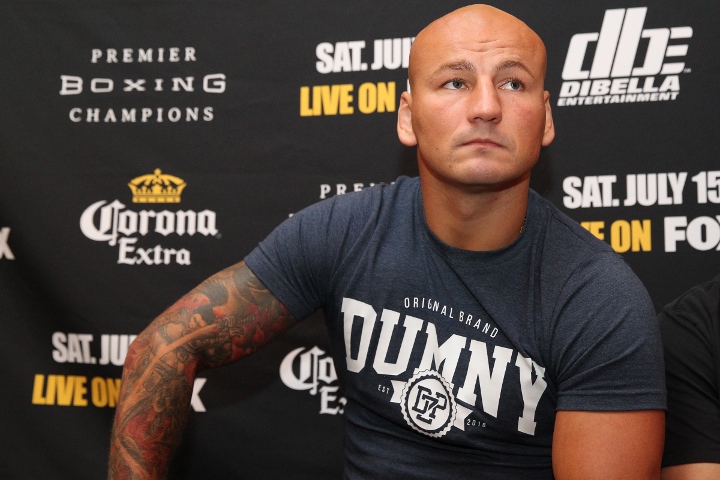 Light heavyweight Pawel Stepien got a controversial win over Russian veteran kayo artist Dmitry Sukhotskiy (23-7, 16 KOs), stopping him officially in round nine of the scheduled ten.

The win wasn't an easy one. After controlling the fight for the first three rounds, Stepien got hit by a sensational left hand by Sukhotskiy, going down in pain. He survived the round, but the Russian veteran evened the fight and led throughout the next three rounds. It hasn't been until the midpoint, when Stepien began to fully recover. As he did he was a deadly force for rapidly fatiguing Sukhotskiy.

Yet the Russian fought back until he was leveled by a left hook / right hand combo in the ninth. He went down and was ready to get up at eight, and he did, but he was nevertheless waved off by referee Arek Malek in what really was an early stoppage. Stepien (12-0, 11 KOs) has defended his Republic of Poland international title for the second time.

WBA/WBO #9 rated middleweight Maciej Sulecki (27-1, 11 KOs) was at his best shape against Frenchman Jean Michel Hamilcaro (26-10-3, 6 KOs). Sulecki, fighting for the first time since his loss to Daniel Jacobs in April, looked very solid, dropping Hamilcaro four times in round two with an assortment of various punches to punctuate his win.

Despite some troubling moments in round one, light heavyweight Marek Matyja (15-1-1, 7 KOs) dropped determined Remigiusz Woz (11-4, 6 KOs) late into the first, and then finished him off in round three.

Light middleweight Przemyslaw Zysk (9-0, 3 KOs) went full distance against Ukrainian journeyman Igor Faniyan, decisioned him unanimously over eight, and forced Faniyan to get under the zero, dropping all way to 16-17-3, 8 KOs.

Eugene Buchmuller (13-4, 10 KOs) of Germany got aggressive from the very opening seconds of his fight against previously undefeated Polish heavyweight Lukasz Rozanski and immediately paid a dear price for that. He was first iced with a devastating right hand, and then knocked out seconds later in the first by the very same punch. Rozanski is now 10-0, 9 KOs.

[QUOTE=Zonkmeister;19264699]Good tussle, decent tempo, both guys showed stuff they can do well. [B]We had Izu Ugonoh commenting in Polish TV (pretty good commentary, BTW, dude's well-spoken and knowledgeable)[/B] and he said that the 97-93 in Szpilka's favor is way too…

[QUOTE=Robbie Barrett;19264835]Wach been training with Wilder? He's almost mastered the windmill technique and nearly matched Wilders result against Szpilka.[/QUOTE] Hahaha, yeah, he was going for the KO in the 10th and decided to give it his best windmill. He was…

[QUOTE=1hourRun;19264104][img]https://i.imgur.com/9tbO1A6.gif[/img] I like to see a rematch. Mariusz looked pretty sharp and his speed and agility really impressed me. I'm happy for Artur, hes had it rough lately.[/QUOTE] Wach been training with Wilder? He's almost mastered the windmill technique and…

Szpilka's lucky as hell this wasn't a 12 round fight, didn't see it myself but have heard rumors that it was a robbery. They ought to do it again