When Anthony Joshua was asked about his boxing bucket list, he didn’t hesitate to reveal what tops it.

Woolhouse quickly followed up to inquire about which opponents he would like to box before he retires, if Joshua has a “tick list?” 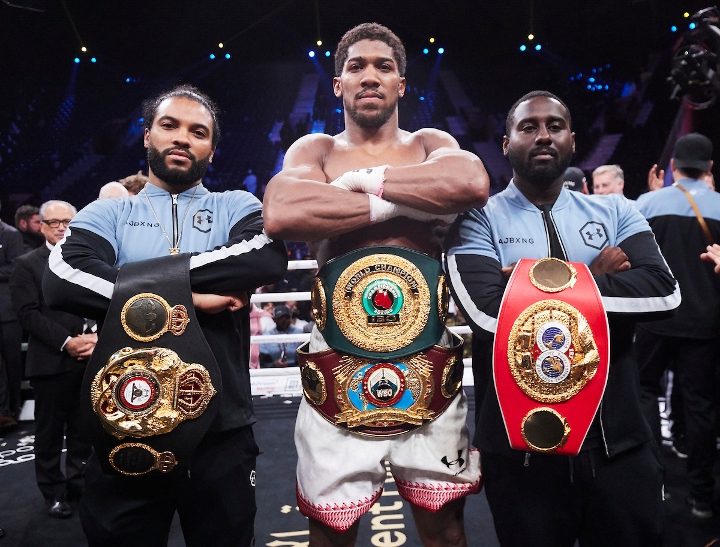 A Joshua-Fury fight might be the biggest event in British boxing history, but Fury must defeat Wilder a second time in their third battle before that bout becomes more realistic. Alabama’s Wilder (42-1-1, 41 KOs) will attempt to avenge his seventh-round TKO loss to Fury (30-0-1, 21 KOs) when they fight a third time October 3 at an undetermined venue.

Ukraine’s Usyk (17-0, 13 KOs) is the mandatory challenger for Joshua’s WBO championship. The former undisputed cruiserweight champion is supposed to battle British veteran Dereck Chisora (32-9, 23 KOs) in a fight that’ll be rescheduled once the COVID-19 pandemic ends.

Cuba’s Ortiz (31-2, 26 KOs, 2 NC) was knocked out by Wilder for a second time in his last fight, which took place November 23 at MGM Grand Garden Arena in Las Vegas.

Brooklyn’s Kownacki (20-1, 15 KOs) suffered his first defeat in his last outing. Finland’s Robert Helenius (30-3, 19 KOs) knocked Kownacki to the canvas twice and stopped him in the fourth round March 7 at Barclays Center in Brooklyn.

Brooklyn’s Miller (23-0-1, 20 KOs) was supposed to challenge a then-unbeaten Joshua for his four titles last June 1 at Madison Square Garden in New York. Miller tested positive for three banned substances and was replaced by Andy Ruiz Jr. (33-2, 22 KOs), a huge underdog who dropped Joshua four times and stopped him in the seventh round to pull off one of the biggest upsets in heavyweight history.

His list aside, the 30-year-old Joshua is set to make a mandatory defense of his IBF belt against Bulgaria’s Kubrat Pulev (28-1, 14 KOs) in his next fight. Joshua-Pulev was scheduled to occur June 20 at Tottenham Hotspur Stadium in London, but it has been delayed indefinitely due to the coronavirus crisis.

[QUOTE=LDBC Slayer;20529774]Because Miller was a loudmouth talker and an undefeated American, good for promotion. Old man 50 year old Ortiz on heart medication is no good for promotion as demonstrated when him and wilder sold about 4 ppvs Joshua offered…

[QUOTE=Cool Scant;20529755]Doesn’t change the fact that AJ is an opportunist and don’t take fights unless they are absolutely advantageous to him. Why offer the fight to old man ortiz with 5 weeks to train when he could’ve offered him The…

[QUOTE=DaNeutral.;20526074]Or ortiz management and owner uncle Al will lie about where Ortiz is or what he's doing and refuse offers then lie about the amount of the offer and not tell Ortiz any of this is even happening until its…

Who said that homeboy doesn't have ambition? :lol1: