High drama at Wembley. Anthony Joshua had a 43-22 edge punches landed over the first 4 rounds (24-5 edge in power landed), including a knockdown. Klitschko then awoke, outlanding Joshua 24-21 in power shots in rounds 5 & 6, dropping the undefeated champ in round 6.

Round 5 was epic, as they combined to land 35 power shots- 40% higher than heavyweight average of 20 per round. Klitschko pulled close over the next 4 rounds by outlanding Joshua 32-13 in jabs (that's 8 landed jabs per round for Wladdy).

Joshua then erupted in round 11 landing 15 of 39 power shots to close the show. Klitschko landed 94 punches vs. Joshua after landing just 52 punches in his loss to Tyson Fury. 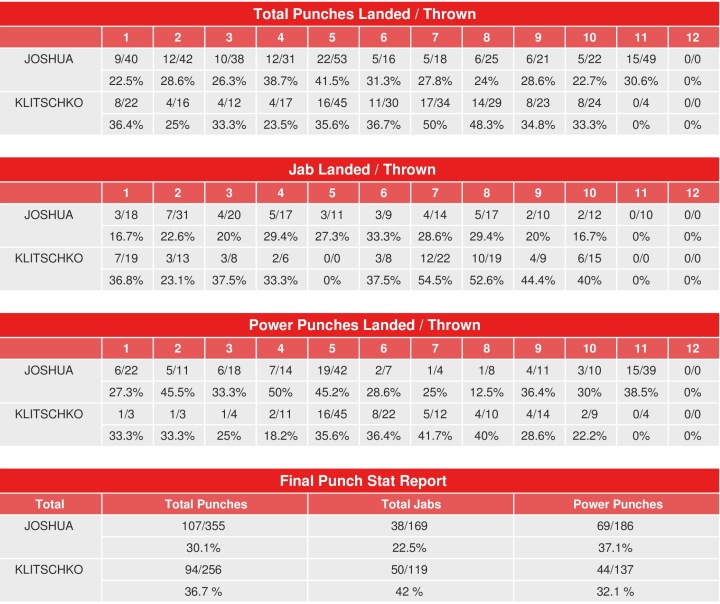 Britain's Joshua climbed off the canvas in round six at Wembley Stadium in London on Saturday to stop Ukrainian Klitschko in round 11 with a ferocious flurry of punches to retain his IBF heavyweight title and add the WBA, IBO belts to his collection in only his 19th professional fight.

The unbeaten 27 year-old from London says he was impressed with the way Klitschko bravely carried on fighting in front of the 90,000 fans after he fell for the first time in the fifth round before rising to his feet twice in a pulsating finish.

Joshua opened up a cut on Klitschko's eye after a stinging left hook in the fifth round before Klitschko responded in the next round with a stiff right hand to knock Joshua down for the first time in his career.

The heavyweight great, who was the king of the division for nine years, says he won't make any immediate decisions on his future in the ring.

[QUOTE=Kim Jong-Un;17668541]His shot in the 11th that stunned Wladimir was from AJ pushing/palming the back of Wladimir head down and sneakly putting an uppercut in. Doesn't matter If It was intentional It isn't allowed.[/QUOTE] Damn, I'll have to watch that…

[QUOTE=BoxngLove;17668268]I would agree with the stoppage, as the final shots were missing the mark, but you had to know Wlad was 3 sheets to the wind. And yes the initial KD hit the top/side of Wlad's head, but he ducked…

[QUOTE=Kim Jong-Un;17633963]I thought Wladimir would be ahead as well, I think the punch stats are counting illegal shots as well like the 11th round knockdown which from a punch to the back of the head, not a legit knockdown. Like…

[QUOTE=Sledgeweather17;17633276] [B]Does it really matter who your biased ass had winning?Round 11 was gonna be a 10-7[/B] round if Wlad survived, maybe even 10-6 coz it looked like he was just gonna keep goin down in that round. What would…

[QUOTE=BoxngLove;17632383]THIS.. I have not seen the scorecards (any1 have a link?), but I had Wlad ahead at the stoppage. Boxing is SO corrupt. We should go back to endless rounds, so we do not have to let old senile pocket-padded…