Although Anthony Joshua and Joseph Parker boasted a combined 38 knockouts in their 44-0 record, their four-belt unification bout was a war of nerves fought at long range. 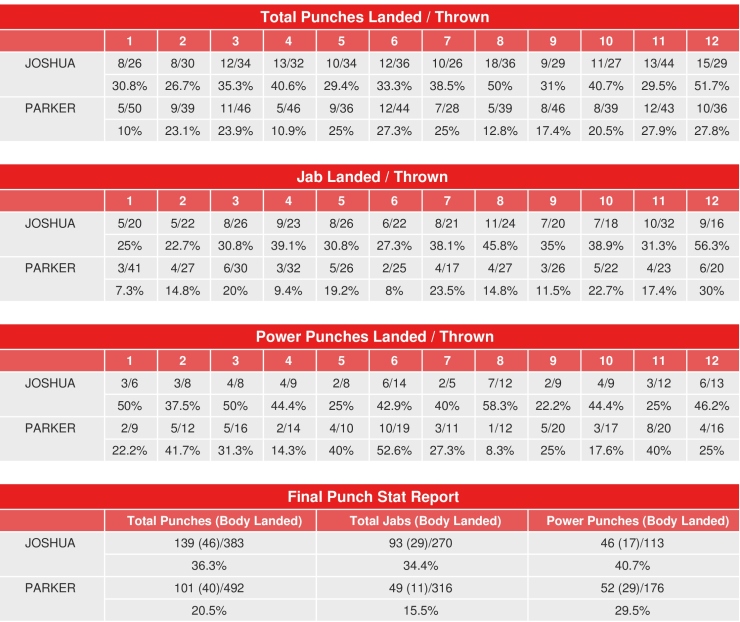 The 26-year-old Aucklander became the first man to stretch Joshua, who moves to 21-0, the full 12 rounds but was defeated by unanimous decision on Saturday.

The Watford-born 28-year-old now holds the IBF, IBO, WBO and WBA belts. Two of the three judges scored it 118-110 in Joshua's favour with the third giving it to the London Olympic champion 119-109.

There were few clean punches in a tense opening stanza as both boxers felt each other out, an energetic Parker however unable to stop Joshua dominating the middle of the ring.

A cut above Parker's left eye was evident from the third round on as he was again forced to expend energy trying to move a steadfast Joshua around.

A crowd of almost 80,000 was on hand at Wales' national stadium with American legend Sugar Ray Leonard and former Chelsea and Netherlands striker Jimmy Floyd Hasselbaink among those ringside.

[QUOTE=DramaShow;18629466]damn, i guess being outlanded in 1 round out of 12 means you were exposed these days.[/QUOTE] Yeah exactly, what's wrong with boxing fans?

damn, i guess being outlanded in 1 round out of 12 means you were exposed these days.

[QUOTE=chicken-;18627459]That fight only reinforces the notion that Klitchko was an old man by the time AJ got to him and he was nearly knocked out by Wlad. He's going to have his hands full vs Wilder. AJ has no head…

[QUOTE=PURIST;18627812]Very bad performance by the weightlifter. He obviously won but looked clumsy and again ran out of gas early.[/QUOTE] Ludicrous comment! Two things that Joshua did NOT do were: (a) look clumsy; and (b) run out of gas. He was…

Very bad performance by the weightlifter. He obviously won but looked clumsy and again ran out of gas early.