Andy Ruiz has always been a portly pugilist.

When he entered the grand stage for the first time to face off against Anthony Joshua in June, he scored the summer stunner on short notice as a replacement opponent, while also shocking casual fans who were seeing him for the first time without a shirt.

Although Ruiz doesn’t planning on campaigning for Mr. Olympia anytime soon, he would have preferred to have more time to transform his body much like the Adonis-like figure Joshua (22-1, 21 KOs) maintains. 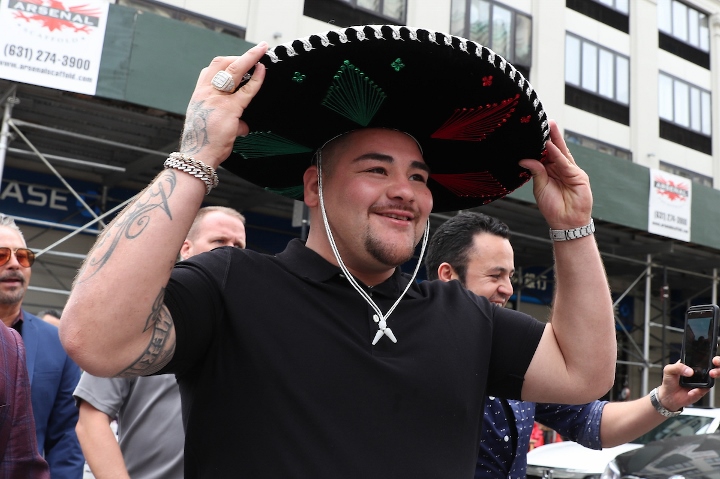 Ruiz (33-1, 22 KOs) will enter his rematch Dec. 7 in Saudi Arabia a much more slimmer and lithe fighter thanks to a full camp. Under the guidance of Manny Robles, Ruiz has been training on the high altitude grounds of Guadalajara, Mexico to improve his cardio and physique.

“As boxers, we have to sacrifice being away from our loved ones, and being over in Guadalajara was something different. They had me locked in the cage so I can be an animal inside of the ring. I think that was Manny’s plan, but it was a good idea though. He’s going to have some tricks up his sleeve, but so are we,” Ruiz said at a press conference at The Boxing Club East Village in San Diego.

“It was pretty hard at first because the altitude was pretty high. We were running in the mountains and doing a lot of different drills. All of the hard work we did in Guadalajara will show.”

Ruiz said this camp is a lot more different than his last one when he scored a seventh round upset because he has time to rest and let his body recover. He also has time to shed off some excess weight.

“There were times I didn’t want to train and complain [preparing for the first fight]. Luckily I have a great trainer in Manny Robles who was always looking after me, and pushing me. But this time, we have more time and are on schedule and will be in great shape.”

Robles said Ruiz has been staying focused, disciplined and grounded despite his newfound fame.

“It’s easy. He didn’t forget where he came from,” said Robles. “He doesn’t forget his people and his family. If you look around him, he’s got the same people hanging out with him since day one. When you have that, it’s easy to stay grounded.”

Ruiz, who looked a bit more svelte since we last saw him, credited his new look to a habitual diet thanks to a creature from the sea.

“I’ve been eating a lot of salmon, and I’m sick and tired of salmon right now,” said Ruiz. “I had to have my cheat day yesterday, and I’m probably going to have one today, too. But that’s why we train. We’ve been eating good, with portions. But like I said, a lot of salmon. My favorite cheat meal is chile relleno, carne asada and chilaquiles.”

[QUOTE=*Makaveli*;20138326]Il be very surprised if Ruiz drops his robe to reveal an Arnie physique on fight night , at best he will be a bit less flabby .[/QUOTE] Probably more of a Joseph Parker type physique I reckon. Whatever he…

[QUOTE=Adamsc151;20138320]Its always nice to lose a bit of weight, and if Ruiz is happier looking at himself in the mirror then I'm glad for him. The thing is he fights great as a chunky bloke, will he fight as good…

Its always nice to lose a bit of weight, and if Ruiz is happier looking at himself in the mirror then I'm glad for him. The thing is he fights great as a chunky bloke, will he fight as good…

why doesnt the dumb ass interviewer ask him a simple question: 1. what does he weigh now 2. what does he expect to weigh on the fight we already know he gained a ton of weight after the last fight…

Given Ruiz's physique, ten lbs isn't much, but it's a reasonable amount to lose in such a short time. If he loses too much, too soon, he'll be weight-drained.