Whyte, who was the mandatory challenger to the WBC title, was knocked out cold in the fifth round of his bout with Alexander Povetkin at Matchroom's Fight Camp in Brentwood.

Povetkin, nearly 41-years-old, was down twice in the fourth and appeared to be on the verge of getting knocked out himself - when he landed a huge uppercut to knock Whyte out in the fifth.

The loss eliminated a big stumbling block to a potential 2021 unification clash between Tyson Fury and Anthony Joshua. 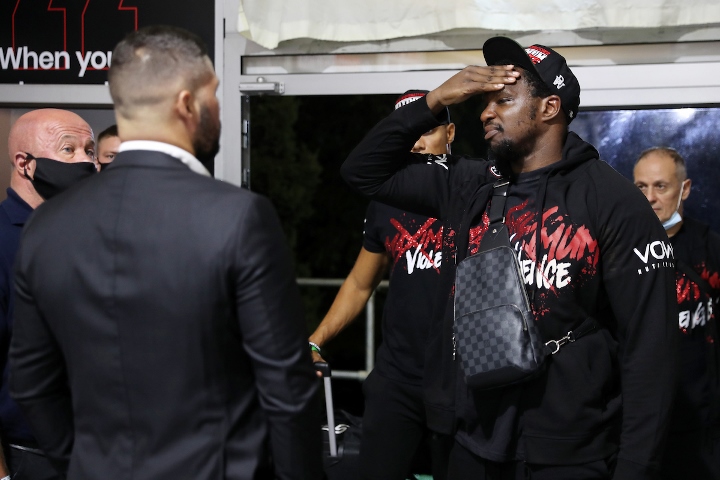 Whyte plans to exercise an immediate rematch clause, with his sole target being a second fight with Povetkin in the fall - possibly on a date in November or December.

Earlier this year, Whyte was aggressively pushing to get a fight with Ruiz, who had little interest in the bout.

They were featured on the same card in December, in Saudi Arabia. Whyte won a tough decision over Mariusz Wach on the undercard, while Ruiz lost a twelve round decision in his rematch with Anthony Joshua in the main event.

Whyte has been verbally blasting Ruiz since the start of the year - and taking numerous shots at his weight among other things.

According to Ruiz, Whyte has been one of the most vocal trash talkers in the heavyweight division - and is now looking for sympathy in the wake of his knockout loss.

"Stop playing the victim card bro...You talk all this sh-t, disrespect your opponents at weigh-ins, post stupid memes and now we gotta feel sorry for you cause you got KO’d? Get the f--k out of here," Ruiz stated.

[QUOTE=_Rexy_;20733981]And then Dave Allen got a highlight reel KO off him too, and people conveniently forgot about it lol[/QUOTE] Yep, Lucas browne played the role perfectly.

[QUOTE=D4RKW4T3R1;20733180]With all due respect, I understand where your comments regarding Americans come from considering the loud mouth representing us but most Americans are much more humble considering the dominating you Brits have had going back to Lennox Lewis.[/QUOTE] on this…

[QUOTE=Jkp;20732415]Is Lucas browne even in top 100? He can't even hold down a bouncing job anymore. He was hands picked by Eddie for whyte, from the other side of the world, as he is one of the few boxers bad…

[QUOTE=Jkp;20733961]My grandmas unbeaten too. Tell me more about how good Dave Allen and Lucas browne are? ... Lucas browne has always been f grade, whyte landing one of his telegraphed sloppy hooks on him, didn't suddenly turn him into f…