The Key West-sopped crooner – in what became his first Billboard Top 40 single way back in 1974 – promised that “Come Monday, it'll be all right.”

So as I hit the pillow early Sunday, irritated yet again at the chronic jackass that is Adrien Broner, I clung to my inner parrothead and assumed my angst would fade within 24 hours.

Instead, the more I breathed the lingering stench Broner created in his third TV business trip to Brooklyn, the more set I became in believing it ought to be his final on-camera opportunity.

For those who didn’t catch it live, here’s a quick recap:

Moments after “The Problem’s” main-event 12-rounder with Jessie Vargas was announced a draw, Showtime’s Jim Gray sidled alongside the fighters to get some instant feedback.

That said, it was really so close that anyone beyond 7-5 toward either ought to be investigated.

Anyway, as Gray entered the discussion, the gritty persona that Broner had donned while working his way back into a fight he was headed toward losing instantly gave way to the loutish fool he devolves into nearly every time a premium cable camera points in his direction.

Asked for a reaction to the draw as Vargas stood nearby, he said: “Hey man, f*** all that. F*** all that. I beat your ass. Look at his face. It looks like I beat him with what they beat Martin Luther King with.”

To Vargas’ suggestion they’d gone at it for 12 rounds, he responded: “We didn’t go at it. That’s gay. Going at it is gay.”

Gray steered questions toward the Cincinnatian alone after Vargas exited, but the repeated suggestion – this time by Gray – that it had been a competitive fight reopened Broner’s boorish floodgates, eliciting: “You got cataracts? Your eyes f***ed up?”

Then, on whether new trainer Kevin Cunningham had made a real difference, he shot back: “You a different fighter with that different suit on. Did things change when you changed that old-ass suit?” 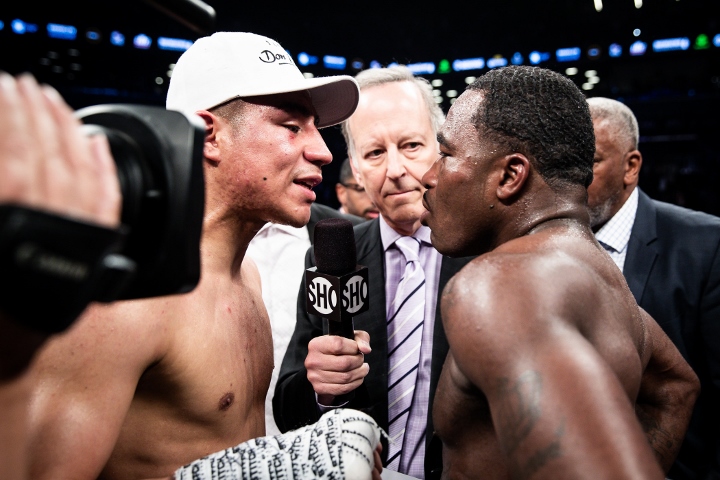 Finally, Gray sought an exit with a simple restate of Vargas’ previous query, asking Broner if he’d be interested in another 12 rounds with the former two-division champion – who, incidentally, was born in Los Angeles, lives in Las Vegas and was fighting in Brooklyn for the first time.

The response: “Hell yeah, but let’s go to my town. I want to fight him where I’m from. The Mexicans in here. … Everybody keep booing me and sh*t. They want rice and chicken. I want some mother f***ers that want some Coneys around me.”

No stranger to pre- and post-event hubbub, Gray stayed on point and reacted with no more than intermittent cringes – having dealt with Broner’s on-the-job silliness before and presumably not wanting to expand things beyond necessary Q & A limits.

He threw the broadcast reins back to the team at ringside, where fellow Hall of Famer Al Bernstein simply muttered, “Charming as ever.”

The higher-ups at Showtime, however, are another matter.

Whether it’s CEO David Nevins, programming kingpin Gary Levine or sports programming boss Stephen Espinoza – or perhaps another person entirely – surely someone at the network’s midtown Manhattan headquarters has the power to rewind Saturday’s broadcast and the sense to determine Broner’s conduct flies in the face of any entity labeling itself as the “total premium entertainment package.”

He’s a world-class fighter and a charismatic guy, sure.

But for smart people like Nevins, Levine and Espinoza, there’s got to be more to it.

And considering the depth and breadth of talent out there these days, there are simply too many other fighters available – with comparable levels of both skill and allure – who don’t make it a point to act the fool simply to generate a few extra next-day Twitter mentions.

Of course, there are many who’ll insist I just don't get it.

Broner is a salesman, they contend. And so long as his product is top of mind – which this column, by definition, clearly illustrates 48 hours later – then his relevance mission is accomplished.

With their man in mind, I call bullsh*t.

Though not every fight need rise to the hugs-and-kisses level reached by British rivals Tommy Coyle and Sean Dodd several hours earlier in Liverpool, what they and others did prove Saturday was that being collegial – or at least not full-on reprehensible – does nothing to impact the quality of the combat or the attractiveness of the broadcast.

Regional heroes Coyle and Dodd provided nearly six full rounds of intense action before the latter was rescued by referee Robert Williams at the Echo Arena, and world-class commodities Carl Frampton and Nonito Donaire turned the same mature but violent trick over 36 heated minutes a few hours later across the Irish Sea in Belfast.

The two fighters embraced in the ring after the final bell, were cordial during a subsequent press conference, and then, gasp… continued the gentlemanly behavior via post-fight tweets.

Said Frampton of Donaire: “A gentleman, warrior, legend and now friend for life. Thank you for sharing the ring with me.”

Donaire replied: “First of all, always want to thank God for keeping me safe in that ring. Not taking anything away from Frampton. He is an amazing fighter, smart and a tough mf! Like he said to me ‘friends forever.’ Congratulations my brother may you continue to be on top.”

Even Jimmy Lennon Jr., whose enthusiastic pre-fight intros have become synonymous with the Showtime brand, couldn’t get over how much better off the sport and more might be thanks to their conduct.

“After meeting (Donaire),” Lennon said, “it’s hard to walk away without thinking you’ve just met one of the most engaging, kind and graceful persons around. What an ambassador to boxing and humanity!”

Now I’m no Stanford grad and I’ve conducted zero focus groups since Saturday, but I’ve still got to believe that having those sorts of envoys would pay far greater long-term dividends – even in an era of trickle-down crudeness – than one who curses, offends and stereotypes by force of high-profile habit.

So, rather than rolling their collective eyes, airing pre-fight packages about newfound maturity and reveling in the lowest common denominator, it’d be nice if someone with enough brass – both in their title and their constitution – stood up and said, “You know what, he’s just not worth it anymore.”

I won’t hold my breath waiting, but it’s at least nice to ponder the possibilities Coyne suggested:

“You can be talented and decent at the same time,” he said. “You don't need to trash talk to sell a fight.”

And in the meantime…

Does anyone want to buy a Margaritaville blender?

Fitzbitz says: The Ghanaian is clearly a rugged guy and has beaten everyone in front of him, but Magdaleno is being primed for bigger things and shouldn’t stumble here. Magdaleno by decision