Adames Drops Conley Three Times, Stops Him In Second Round

The knockout artist from the Dominican Republic dropped Josh Conley three times on his way to stopping him in the second round at CHI Health Center. Their scheduled 10-round fight for the NABF super welterweight title was halted at 2:17 of the second round, despite that Conley got up from that third knockdown.

The 24-year-old Adames improved to 15-0 and recorded his 12th knockout on the Terence Crawford-Jose Benavidez Jr. undercard. The 26-year-old Conley (14-3-1, 9 KOs), of San Bernardino, California, lost by technical knockout in a second straight fight – his first action since Philadelphia’s Julian Williams stopped him in the seventh round 15 months ago in Toledo, Ohio. 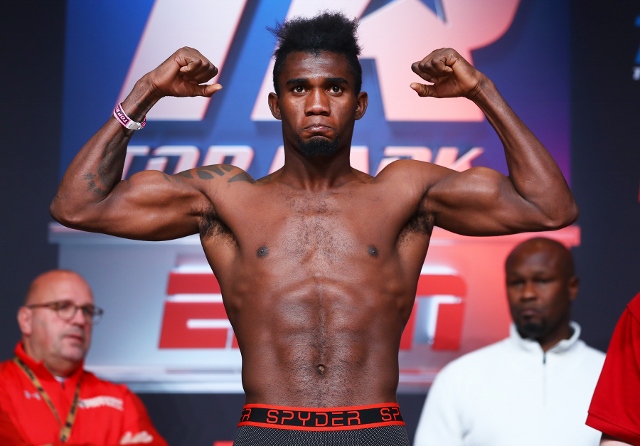 After dropping Conley with a right-left combination earlier in the second round, Adames finished him off with a flurry of power punches that sent Conley to the canvas a third time. He got up, but the referee didn’t like what he saw and waved an end to their fight.

Adames scored a knockdown after landing a body shot late in the first round. Conley complained that Adames’ left hand, which landed below his belt line, was low.

Adames’ performance Saturday night was vastly different from his uninspiring, unanimous-decision defeat of Mexico’s Alejandro Barrera (29-5, 18 KOs) in their 10-rounder May 12 at Madison Square Garden. Adames defeated Barrera, who has been knocked out only by Errol Spence Jr., by scores of 98-92, 97-93 and 96-94.

[QUOTE=Plick647;19190795]it sucks because it all started with a low blow the ref missed. wasnt the same after that.[/QUOTE] I don't feel too bad cause dude didn't even make weight and then came in at 171lbs into the ring.