Even with fewer categories this year, three previous honorees are in the hunt to repeat in the year-end awards.

Saul ‘Canelo’ Alvarez, Eddy Reynoso and Keith Connolly are among the 2019 year-end recipients who have made their way back to the ballot among the nominees announced for the 2020 Boxing Writers Associations of America (BWAA) awards. Just five categories will be featured for this year’s awards, with the list of nominees formally announced by the organization on Monday.

Mexico’s Alvarez (54-1-2, 36KO) was an overwhelming favorite for 2019 Fighter of the Year and is back among the six candidates in the hunt for the Sugar Ray Robinson Award for 2020 Fighter of the Year. The pound-for-pound king made his way back to the ballot following a lopsided 12-round win over England’s Callum Smith on Dec. 19 to become a legitimate four-division titlist. 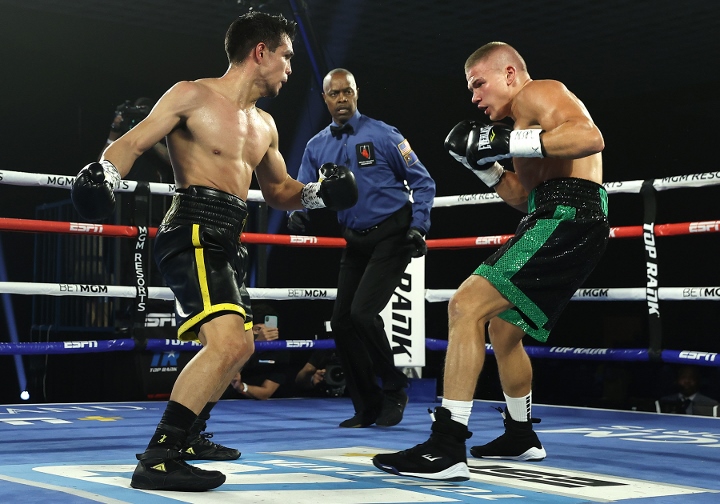 Still, Alvarez remains a longshot to repeat, even in a pandemic-stricken 2020 where one notable win is enough to garner consideration. He is joined on the ballot by Gervonta Davis, Errol Spence Jr., Joe Smith and category odds-on favorites Tyson Fury and Teofimo Lopez Jr.

England’s Fury (30-0-1, 21KOs) served as the frontrunner for most of 2020 following his one-sided destruction of previously unbeaten Deontay Wilder (42-1-1, 41KOs) in their heavyweight championship rematch this past February at the MGM Grand Garden Arena in Las Vegas. The bout served as the sport’s last major superfight prior to the start of the ongoing coronavirus pandemic.

Brooklyn’s Lopez (16-0, 12KOs) established his case following a 12-round points win over Vasiliy Lomachenko this past October. Lopez—whom represented Honduras in the 2016 Rio Olympics—outboxed Lomachenko—a two-time Olympic Gold medalist and 2017 BWAA Fighter of the Year recipient—to dethrone the Ukrainian southpaw in their World lightweight championship and multi-belt unification bout which garnered the highest TV ratings of any single fight in 2020.

Joining Alvarez in the hunt to become a repeat honoree is Eddy Reynoso, who trains and manages the Mexican superstar. Reynoso claimed the Eddie Futch Award for 2019 Trainer of the Year for his work with Alvarez, flyweight titlist Julio Cesar Martinez and unbeaten lightweight Ryan Garcia. He makes his way back to the ballot in 2020 with an even deeper stable, as he is joined by 2012 BWAA winner Robert Garcia, Javan SugarHill Steward, Derrick James and Teofimo Lopez Sr.

Reynoso is also in the running for the Cus D’Amato Award honoring the BWAA Manager of the Year. He is joined by Connolly—who won the award in 2019—along with returning nominee Peter Kahn, Rick Mirigian and David McWater, the latter whose lengthy lists of clients includes Lopez.

The one category which remains subject to last-minute alterations is the Muhammad Ali-Joe Frazier Award for 2020 BWAA Fight of the Year. The current clubhouse leader is the eight-knockdown war between Jose Zepeda and Ivan Baranchyk. Zepeda was the last man standing, knocking out Baranchyk of their unforgettable Oct. 3 slugfest live on ESPN+ from The Bubble at MGM Grand in Las Vegas.

There still remains at least one major fight on the 2020 calendar, taking place on New Year’s Eve in Tokyo. Four-division and reigning junior bantamweight titlist Kazuto Ioka defends his belt versus unbeaten Kosei Tanaka, a former three-division titlist who aims to join his countryman as the only male boxers to win belts in four separate weight classes.

Many industry insiders have the bout tabbed as a can’t-miss action affair. Should it live up or exceed expectations, a conversation will have to take place as to whether it replaces any of the six nominees or is simply added to the ballot. Room was made for Carlos Gongora’s upset 12th round knockout of Ali Akhmedov, with their Dec. 18 DAZN-aried bout from Seminole Hard Rock Hotel & Casino in Hollywood, Florida added to a ballot previously limited to five nominees.

Masayoshi Nakatani’s comeback knockout win over Felix Verdejo on Dec. 12—live on ESPN from The Bubble at MGM Grand in Las Vegas—was also a late entry. The instant classic joins a field that includes Gervonta Davis’ 6th round knockout of Leo Santa Cruz atop their Oct. 31 Showtime Pay-Per-View event from The Alamodome in San Antonio; Alexander Povetkin’s off-the-canvas 5th round knockout of Dillian Whyte on Aug. 22 in Brentwood, England; and Juan Estrada surviving a knockdown to drop and stop Carlos Cuadras in their Oct. 23 rematch in Mexico City.

The full list of nominees for all five categories are as follows:

Voting will run through January 22, 2021. Winners will be presented at a combined dinner with the 2019 award winners, with the 2019 BWAA Awards banquet canceled due to the ongoing coronavirus pandemic.

[QUOTE=BillyBoxing;20985390]Because he does not deserve it.[/QUOTE] Well he beat a 25 year old prime fighter Jeison Rosario but it's the way he's talk to the media. But I guarantee you that if that was Brian Castano with 3 titles at…

[QUOTE=SimpleTouchee;20985179]Why no Jermell Charlo in any p4p or FOTY discussions by these media pundits and boxing writers it's all agenda base tbh.[/QUOTE] Because he does not deserve it.

Why no Jermell Charlo in any p4p or FOTY discussions by these media pundits and boxing writers it's all agenda base tbh.