James had actually stepped in on short notice for Bryant Perella (14-0, 13 KOs), who was forced to withdraw from the bout due to a left thumb injury. Early in the fight, the lanky James had some success boxing from distance in what amounted to a cagey start, knocking an off balance Ugas sideways in round three. However, at the end of the third stanza, Ugas buckled James with a perfectly timed overhand right.

Before that, both fighters had mostly postured and worked behind their jabs, but Ugas’ success with the right hand would start to make more of an impression as the bout wore on. In round four, Ugas was outworking a tiring James behind that educated right hand, shooting hooks to the body to punctuate combinations. James’ lazy left certainly didn’t help matters, as he was consistently open for counters upstairs. 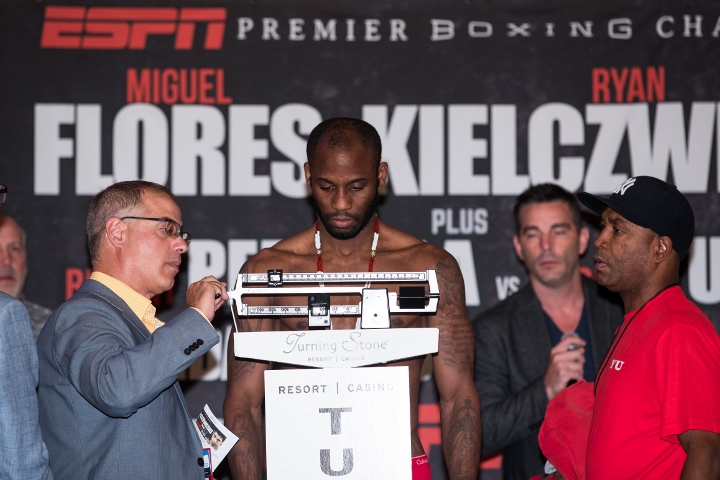 James actually backed Ugas up with a combination to start round five, but it was one-way traffic from there. Ugas’ hard single shots seemed to be hurting James, and a perfect straight right at the end of round six knocked James mouthpiece out. Ugas’ controlling of distance and calm demeanor were particularly impressive, although it seemed like he could have applied more pressure after buzzing James on multiple occasions.

In round nine, Ugas strayed low with a left hook and was admonished by the referee. Despite some decent exchanges down the stretch, the fight never really transitioned into that extra gear. Ugas ultimately outclassed James, and he executed his game plan with discipline and precision in what amounted to a steady, efficient performance.

Parella should be happy he was not fighting tonight, he is way too damn slow for a welterweight. Ugas would have had an easier time with him.

Glad to see Ugas get the win. He has paid his dues, gone through setbacks, and fought at his best tonight considering the layoff.