In order to save last weekend’s main event in Mexico, promoter Felix ‘Tutico’ Zabala Jr. was forced to borrow from the next Telemundo show in queue.

Whereas Mauricio Pintor didn’t know until less than 24 hours before the fight whom he was going to face, Yomar Alamo has been spared such a dilemma heading into the Telemundo summer season finale.

A new opponent has been secured for the unbeaten super lightweight prospect ahead of Friday’s main event at Osceola Heritage Park in Kissimmee, Fla. Alamo will now face Mexico’s Salvador Briceno in a scheduled 10-round regional title fight. 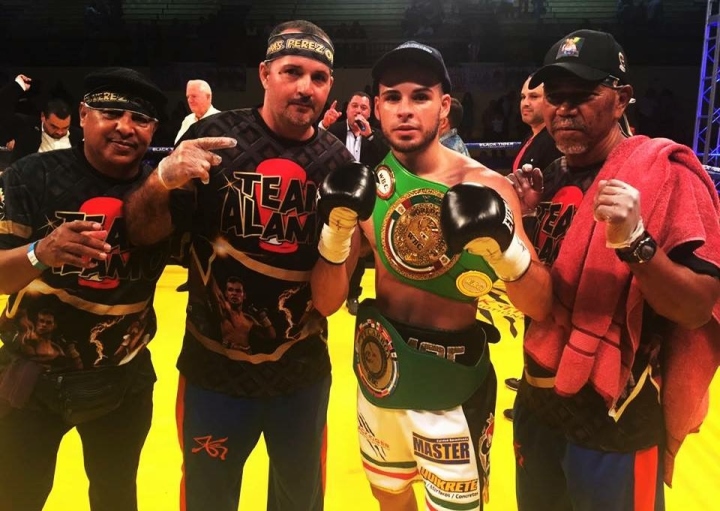 Briceno (15-4, 9KOs) replaces originally scheduled Miguel A. Martinez, who was pulled from the show in order to salvage last Friday’s card in Mexico City. Martinez faced Pintor as an 11th hour replacement for Edson Ramirez, who was a full division over the welterweight limit at last Thursday’s pre-fight weigh-in.

Pintor—the nephew of Hall of Famer and former two-division champ Lupe Pintor—went on to win the fight via 2nd round stoppage, all while event handlers were forced to already think about this weekend’s show.

“I hope I never again have to go through what we dealt with the past few days,” a now-relieved Zabala Jr. told BoxingScene.com in confirming this weekend’s main event is now secure. “We’re just glad both shows can go on, as this coming one is a terrific one, a great way to end the summer.”

Alamo (16-0, 12KOs) has quickly emerged as a series favorite since joining the circuit last summer. The 24-year old from Puerto Rico will fight for the third straight time in Florida, first playing the Sunshine State in a 4th round knockout of Wilfredo Buelvas last July.

It was enough to receive the honor of headlining the first show of the 2019 Boxeo Telemundo season, outpointing Mexico’s Manuel Mendez over 10 rounds.

Having prepared for a squat slugger in Martinez, Alamo will now mentally prepare himself for the scrappy 5’9” Briceno, who moves up in weight for the fight. In his most recent start, the 24-year old from Guadalajara, Mexico offered a stiff challenge in defeat versus rising prospect Gabriel Flores this past June on ESPN.

Briceno had won two straight heading into that bout following a Telemundo-televised 2nd round knockout versus Antonio Moran last summer.

Also on the show is perhaps the series’ most significant chief support in recent memory. The hope is that a more conclusive ending comes of the super flyweight rematch between Puerto Rico’s Jeyvier Cintron and Japan’s Koki Eto, who met in this very venue two months ago.

For a fight that lasted just over two minutes, the brief affair was mired in controversy. Eto was initially hailed a 1st round knockout winner, which in real-time was suggested to have come from a right hand shot from the veteran contender.

Slowed down replays showed that Eto headbutted Cintron prior to landing the fight-ending right hand which floored the unbeaten prospect and left him staggering around the ring. Referee Andrew Glenn was still in the process of ordering Eto to a neutral corner before being run into by a stumbling Cintron who repeatedly complained of the foul.

The fallen boxer’s concerns sparked an immediate and ultimately successful protest filed by his handlers, with the result changed on the spot to a No-Contest and a rematch ordered by the World Boxing Organization (WBO) whose regional title was at stake.

The same belt will be on the line for Friday’s rematch. Additionally, the winner will be groomed for a crack at legendary four-division titlist and reigning WBO 115-pound title claimant Kazuto Ioka.

“Whatever pain we felt going through last week’s show, will be well worth it once we’re ringside in (Kissimmee) this weekend),” quips Zabala Jr.

Who is facing who on what?