Both boxers easily made weight ahead of their 12-round headliner Sunday evening in Fuzhou, China. Xu (16-2, 2KOs) tipped the scales at 125.7 pounds, slightly heavier than Japan’s Kubo who weighed 125.6 in a bid to become a two-division titlist.

Xu attempts the first defense of the title he claimed in an all-action thriller versus Jesus Rojas this past January. The bout marked the second straight in the United States for the 28-year old, who returns to his native China for his first fight at home since last July. 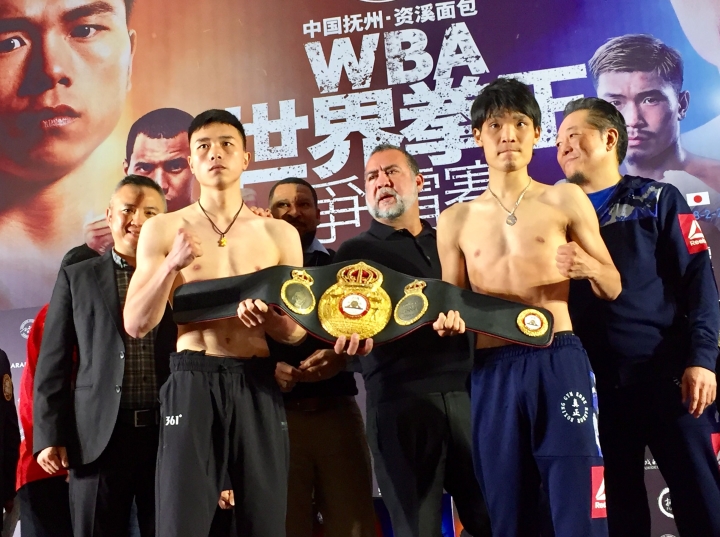 Kubo (13-1, 9KOs) aims to become a two-division titlist, having previously held a WBA belt at super bantamweight. The reign was short-lived, as the now-29 year old southpaw dropped the title in his first defense, a 9th round knockout at the hands of Daniel Roman in Sept. 2017.

The bout was his last at super bantamweight, although Kubo has fought just once since then—a split decision win over countryman Hiroshige Osawa last April. Sunday’s bout will mark his first career fight outside of Japan.

The well-traveled Canizales (21-0-1, 17KOs) weighed in right at the 108-pound limit for his third title fight in as many countries, none of which have come at home. The squat 26-year old won the crown with a 12-round decision win over unbeaten Reiya Konishi last March in Japan, followed a 12th round stoppage of Bin Lu last July in Malaysia.

Kimura (18-2-2, 11KOS) weighed 107.5 pounds in a bid to become a two-division titlist. The 30-year old from Japan is going about the hard way, dropping down from flyweight where his near two-year title reign included wins over Shiming Zou and Toshiyuki Igarashi before dropping a thrilling 12-round decision to Kosei Tanaka last September in the 2018 Fight of the Year.

Both title fights will air live on CCTV-5 in China (7:00pm local time) and will stream live on WBA’s website at wbaboxing.com beginning at 7:00am ET.