As Xander Zayas got on the phone earlier this month, he was just another high school senior.

“I work almost every day on my schoolwork,” said Zayas, who has been taking his classes online since March, when he stopped being just another high school senior.

It was on March 15 that Zayas, an 11-time Puerto Rican and U.S. National champion, became – at 16 - the youngest fighter to ever sign with Top Rank Boxing. On Saturday night in Reno, the now 17-year-old makes his pro debut against Genesis Wynn, and yeah, everything has changed, but that doesn’t mean Zayas doesn’t want to embrace his senior year.

“I’m planning on going back to school in January so I get to go to my prom and get my diploma,” he said.

It’s almost hard to fathom a teenager entering the professional level of the hardest game. Then again, Zayas’ fellow Boricua – Wilfred Benitez – won his first world title at 17, so there’s some perspective. And when you consider that the San Juan native has been boxing since the age of five, with over 130 amateur bouts to prove it, he’s got a lot more experience than many of his peers entering the punch for pay ranks.

But still, how does he pull off school, training, rapidly increasing media obligations and the idea that Wynn is trying to make a name off him this weekend?

“All my friends are always impressed,” Zayas laughs. “They’re always asking me questions about boxing and how I manage the time and how I do things. It’s just part of the game and part of what I do. It’s a lifestyle already. The time is already set; all I do is go to the gym and put the work in.”

Zayas does appear to have all the tools to be a success. The talent is evident, he’s got an excellent team around him, and his head is in the right place. Most importantly, though, he’s already shown that he has the discipline to go far in the sport, and he knows that’s what it will take to separate himself from the pack in the welterweight division.

“All the people around me, they all have discipline,” Zayas said. “Since I was a kid, my mom showed me that hard work pays off, so I always kept the same discipline and same mindset that if I don’t work hard, I won’t be able to accomplish my dreams. So I just keep that in mind that I want to make my mom and my whole family and everybody around me proud. So the discipline comes from that.” 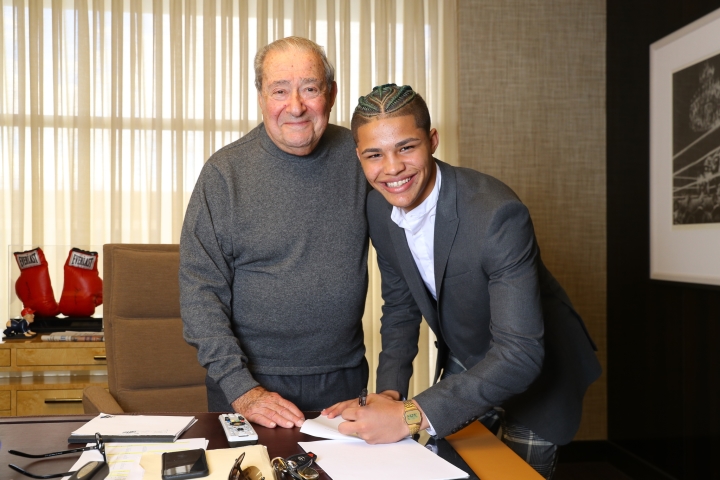 He also has the intention of making his island proud. Though he lives in Florida now, his heart will always be in La Isla del Encanto, a place that is starved for the type of star it hasn’t had since the retirements of Felix Trinidad and Miguel Cotto. Sure, there have been good fighters and world champions to emerge from Puerto Rico since then, but no one that has captured the imagination of the people there. Zayas has the smile and charisma to start; if his punch and talent follow, he can have his wish “to paralyze the whole island” when he fights.

“It’s very important because the people of Puerto Rico need a new superstar,” said Zayas. “I feel ready to be that next superstar and to be someone they look up to. I want to make my people in Puerto Rico feel proud to be Puerto Rican and proud to have me as a superstar for them.”

That’s a lot of hope to put on the shoulders of a teenager, but as a teenager, Zayas has the confidence that anything and everything is possible. So is there pressure? Not in his eyes.

“It’s not pressure,” he said. “I just want to make our people feel proud. I want to show them who I am and be humble and good with everybody.”

If Zayas is feeling the heat as his debut approaches and the bandwagon moves to standing room only status, he’s not showing it. In fact, as soon as he put pen to paper, he was waiting to put the gloves on.

“I’ve been waiting the whole year,” he said. “Since I signed the contract, I’ve been waiting for the date. Now we got it. I feel ready, my team is ready. I just gotta step in the ring and put on a show.”

That’s the beauty of a pro debut. It’s like spring training in baseball – everyone has a clean slate and optimism is at an all-time high. But eventually, the first pitch is thrown and then you find out for sure what your team has – or doesn’t have. It’s the same in boxing. Highly-touted two-time Olympic gold medalist Robeisy Ramirez (also a Top Rank signee) lost his pro debut in August. Zayas, who was shooting for the Olympics but was going to be too young for 2020, is aiming to avoid that same fate.

I’m not a betting man, but if I was, I’m guessing this kid gets it right. Why? He’s fighting for more than himself.

“I do this because of the legacy that you can bring to your life,” said Zayas. “The love that I’ve got for the sport, the discipline of working hard, of getting up every day to go and train, that really keeps me motivated. And I want to be somebody that people look up to and say, ‘I want to be like him.’”

[QUOTE=Snoop Frog;20140620]Anyone know how much he might be getting paid or the structure of a contract for a prospect like him?[/QUOTE] He'll probably make less than $10k for his first few fights but they probably gave him a 6 figure…

Keep the guy away from motorcycles

Anyone know how much he might be getting paid or the structure of a contract for a prospect like him?

Let's just fatten this kids head up, like we need another Verdejo.