Wladimir Klitschko Backs Usyk To Do Big Things at Heavyweight

WBO, IBF, WBA, WBC cruiserweight world champion Oleksandr Usyk, considered one of the top 10 pound-for-pound fighters after becoming the first cruiserweight to have unified the four major titles in boxing, has sparred with heavyweight legend Wladimir Klitschko, as he prepares for his expected fight on November 10 against Tony Bellew.

Klitschko revealed the boxing ability that Usyk has (15-0, 11 KOs) in terms of technique, and the speed of hands that will shower down on Bellew (30-2-1, 20 KOs) , a man who like his countryman has the ability to do magic in the ring, so he predicted fireworks when they meet at the Manchester Arena.

"I have to tell you that, currently, we have boxed and I have to brag that I still have something," said Wladimir to BoxingScene.com. "It was three weeks ago that we boxed, he has very quick hands, a beautiful technique, and I have to say that it was not easy. I would have no doubt that he has the opportunity [to do big things] also at heavyweight, but with the ideal time to adapt [to the weight limit]." 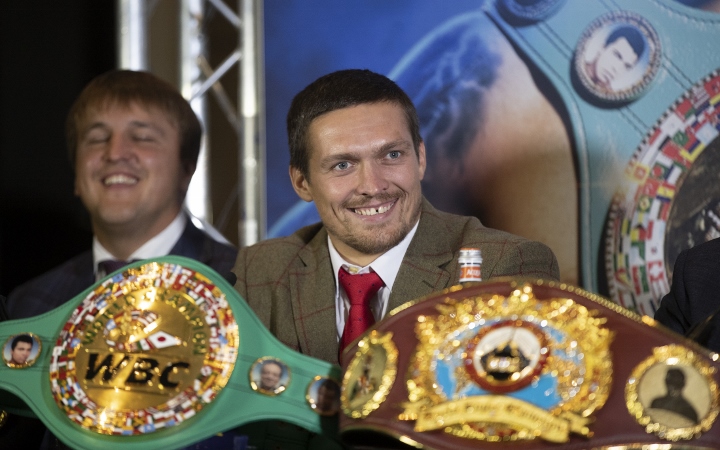 Usyk comes off from winning the Muhammad Ali trophy in the final of the World Boxing Super Series tournament and with it was placed in the Top Ten of the best pound for pound, and instead of grabbing a quiet fight, he decided to face another dangerous opponent in Bellew, who returns from two knockout victories at heavyweight over David Haye.

"I tell you that Bellew is going to face a very complete fighter, with great pace and probably in his best form in Usyk, he is undefeated, he is a world champion and he has not lost in years, I'm not saying it's going to be easy but I want my countryman to keep winning.

"What many fans do not know is that Bellew is capable of magic in the ring, and precisely because of that this fight will be very exciting for the fans."

[QUOTE=Tobi.G;19182578]I would like to see Usyk vs. [B]Tabiti[/B] before Usyk moves up. Tabiti needs at least another year before he could be ready for sutch a fight though.[/QUOTE] Tabiti, or as Floyd Sr. would say; "Deh-beedee"

[QUOTE=Tobi.G;19182578]I would like to see Usyk vs. Tabiti before Usyk moves up. Tabiti needs at least another year before he could be ready for sutch a fight though.[/QUOTE] Tabiti fights Saturday in the wbss if I’m not mistaken

[QUOTE=THEFRESHBRAWLER;19182030]Yeah that’s true about Cruiserweight it’s been like that for 5-10yrs with that weight class. I just think if he moves up to Heavyweight AJ shouldn’t be his first fight. But if they’re looking to cash out then AJ probably…

Appears that Usyk is a Cash out job for his promoters

[QUOTE=Tobi.G;19182578]I would like to see Usyk vs. Tabiti before Usyk moves up. Tabiti needs at least another year before he could be ready for sutch a fight though.[/QUOTE] Perhaps Usyk will not be waiting for him :) P.S. Cool "Current…