Deontay Wilder weighed in at just 212½ pounds for his first fight against Tyson Fury. (photo by Ryan Hafey)

That was the lowest Wilder weighed since he came in at 207¼ pounds for his professional debut in November 2008. By the time the unbeaten WBC heavyweight champion entered the ring to face Fury 14 months ago, the 6-feet-7 Wilder was only approximately 209 pounds, according to Wilder and Jay Deas, his co-trainer and co-manager.

Deas expects Wilder (42-0-1, 41 KOs) to weigh significantly more than that when he fights Fury (29-0-1, 20 KOs) in their rematch two weeks from Saturday night in Las Vegas. They’re not consumed with Wilder’s weight while training for this important rematch, but Deas anticipates Wilder weighing anywhere from the low-220s to the mid-220s for that ESPN/FOX Sports Pay-Per-View main event.

“We’ve never really been concerned about [Wilder’s weight], other than we want him to eat, eat well and eat often,” Deas stated during the most recent episode of The PBC Podcast. “But he burns it so fast, that’s a concern. I wish I had that problem, right? He burns it faster than he can really put it in his body. You also have to remember that we do live and train in Alabama, and you know, it just doesn’t get cold very often.

“And when it’s in the hot months, which you know, is about three-quarters of the year, it’s brutally hot. I mean, it’s oppressively hot. It can be well into the hundreds, with 100-percent humidity. So right now, being in camp January and February, that’s not so much of a concern. So, I’m hopeful, to answer your question, that Deontay would come in the mid-220s, maybe the low-220s. But I would certainly feel a lot better about that than I would 209.” 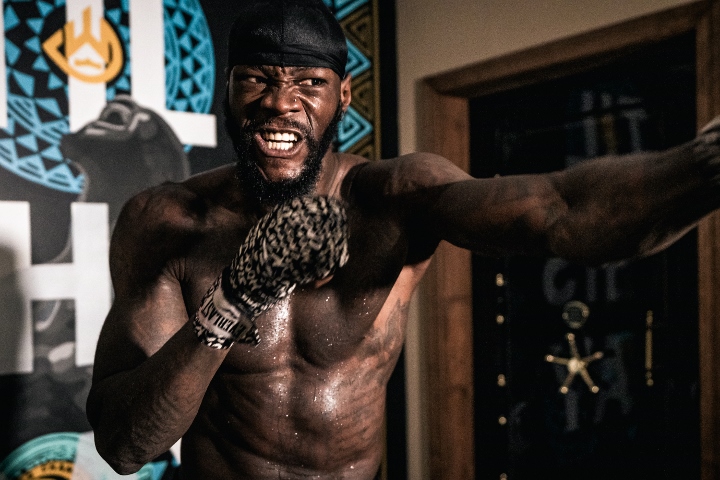 England’s Fury officially out-weighed Wilder by 44 pounds for their first fight, which resulted in a 12-round split draw at Staples Center in Los Angeles in December 2018. Deas estimates that Wilder has been out-weighed in 35 of his 43 professional fights, thus he doesn’t view the 6-feet-9 Fury’s weight edge as an advantage in their February 22 bout at MGM Grand Garden Arena in Las Vegas.

“He’s so used to being out-weighed, I think it’s actually probably an advantage,” Deas said of Wilder. “The speed is a factor and the speed is … you know, part of the reason he can hit so hard is the power he’s generating does come in part from velocity. So, I think a 250-pound Deontay Wilder, you know, I don’t think that’s him. I think he’s got an awkward effectiveness and a very kind of unique athleticism, and it probably works best when he’s, you know, 218 to 226.”

Wilder gets gassed weighing around 212...add another 12 LB.'s and Wilder be fighting with his mouth wide open and be getting KO'd..

[QUOTE=Angeljuice;20370042]The difference between weight classes is 7lb (3kg). If weight doesn't matter, why the big fuss? 3 weight divisions is only 21lbs, why not stage super middleweight vs heavyweight fights?[/QUOTE] Same reason there are many title presently; to have more…

215 to 220 is probably the sweet spot, he could lose his speed if he was heavier

Putting on too much weight will make him slower. The only thing they could hope to accomplish would be to increase his punch resistance. I could see the argument though that Wilder was well below his average weight for the…

[QUOTE=Marchegiano;20368338]Ali-Tyson weights. I don't honestly put that much into weight. It's really not that important of a base stat. A sledge hammer has weight. A ball-peen hammer does not. They both **** steel up.[/QUOTE] The difference between weight classes is…