Wilder: We All Know Fury Didn’t Beat Klitschko; He Beat Himself

LOS ANGELES – Deontay Wilder wasn’t about to give Tyson Fury credit for the former heavyweight champion’s most meaningful victory.

As Wilder went back and forth with his unbeaten challenger during a press conference Wednesday, the defending WBC heavyweight champion made sure to dispute the magnitude of Fury’s upset of Wladimir Klitschko. England’s Fury was a 4-1 underdog against Klitschko, but the 6-feet-9 Brit beat the long-reigning champion by unanimous decision in their 12-round title fight in November 2015.

Fury didn’t just become the first fighter to defeat Klitschko in the 11½ years since Lamon Brewster stopped him in the fifth round of their April 2004 bout in Las Vegas. He also went to Klitschko’s backyard for his championship chance. 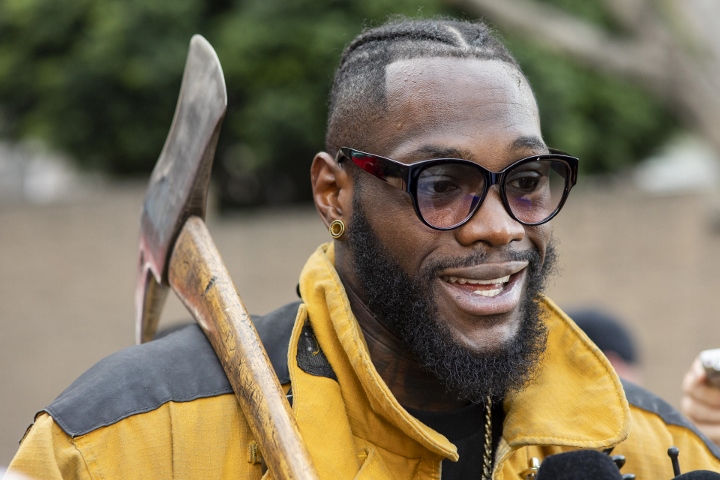 The retired Klitschko is from Ukraine, but he resided in Germany for many years and boxed in his adopted home country numerous times throughout his lengthy career. Fury still clearly out-boxed Klitschko in their 12-rounder in Dusseldorf, Germany, to win a unanimous decision and the IBF, IBO, WBA and WBO titles.

All three judges – California’s Raul Caiz Sr. (115-112), Argentina’s Ramon Cerdan (116-111) and Puerto Rico’s Cesar Ramos (115-112) – scored Fury the winner over Klitschko. The referee, Nevada’s Tony Weeks, deducted a point from Fury in the 11th round for hitting Klitschko behind his head.

England’s Phil Edwards, California’s Alejandro Rochin and Canada’s Robert Tapper have been assigned to judge the Wilder-Fury fight. California’s Jack Reiss will be the referee.

[QUOTE=markther;19328591]I will give credit to Fury for a helluva fight by him but it was recorded a draw for both of them regardless of who the fans thought won. And I thought Fury won. But he won’t be the man…

[QUOTE=markther;19328568]The discussion was about Joshua fighting Wladimir, not Fury fighting Wladimir. Wladimir was 41 and inactive for 1 year and 5 months before he fought Joshua. I definitely give credit to Fury when he fought Wladimir but not Joshua.[/QUOTE] ahhhhh…

[QUOTE=PunchyPotorff;19327878]Quote: Originally Posted by PunchyPotorff View Post Then why did Wlad never have a performance that bad in nearly 10 years? All others in that time frame were very dominant wins. It was Fury, as Wlad admitted in so many…

[QUOTE=_Rexy_;19327883]Wlad was 39, and had a fight against Bryant Jennings 6 months before the Fury fight. It’s joshua that he was 41 for, and inactive for 2 years for. And he almost won that fight.[/QUOTE] The discussion was about Joshua…

Fury beat wilder though that's for sure