Wilder: This Time, Fury's Not Getting Up; I Promise You That!

Like essentially everyone who has seen it, Deontay Wilder still can’t understand how Tyson Fury got up in the 12th round of their fight.

Once Wilder drilled the resilient Brit with a right-left combination that dumped him flat on his back, Wilder walked away certain that he had finished off Fury. Somehow, the lineal heavyweight champion picked himself off the canvas after referee Jack Reiss’ count reached five and made it back to his feet before Reiss could count to 10.

Fury didn’t just get up – he hit Wilder with hard shots that made it difficult for the WBC champion to capitalize on flooring Fury. The challenger’s remarkable comeback enabled him to reach the final bell and fight Wilder to a widely disputed split draw. 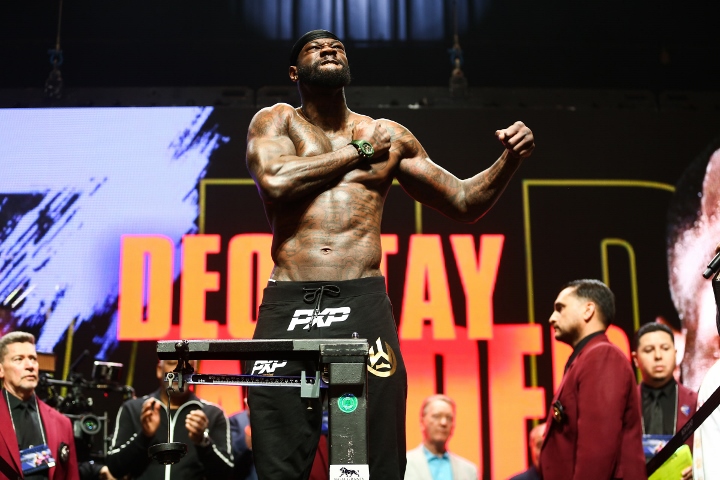 The 6-feet-7 Wilder knows he can’t afford to let the 6-feet-9 Fury off the hook if he hurts him again in their 12-round rematch Saturday night at MGM Grand Garden Arena in Las Vegas. Wilder realizes it’ll be tough to defeat Fury on points in their ESPN/FOX Sports Pay-Per-View main event and has no intention of going the distance for what would be just the third time in his 11-year pro career.

“The first fight was an amazing fight,” Wilder stated during a recent conference call. “It was a very controversial fight, where it left people confused about what happened or who won, you know? This is where we come and settle everything. This is judgment day. This is the moment where everyone will have a clear conscience after February the 22nd, who actually won the first fight. And you’re gonna see who won the second fight. This is unfinished business.

“I’m picking up where I left off at – I knocked him out the first time [and] I didn’t get it. But I’m gonna knock him out this time again, and this time he’s not getting up. That’s for sure. I promise you that. So, I’m looking forward to it. This an electrifying fight. I’m looking for electrifying energy come February the 22nd in the arena, at the MGM Grand. And yeah, baby, you don’t wanna miss this one, as always.”

[QUOTE=Tatabanya;20407100]It all depends on Fury's mind tonight. If he's focused and deprived of fear - as it looks to me he is until now - he could really knock Wilder out. But if he is suddenly attacked by a burst…

[QUOTE=OldTerry;20407041]Since the odds makers have Wilder as the favorite you stand to make some serious coinage if your bet plays true.[/QUOTE] It all depends on Fury's mind tonight. If he's focused and deprived of fear - as it looks to…

[QUOTE=Tatabanya;20406783]My money went on Fury inside the limit at 6.5 plus some peanuts on another draw at 23. But it's really a fight I can't predict, especially now that I know that the third episode is already a done deal...[/QUOTE]…