Wilder: They're Trying To Find Some Kind Of Way To Market Fury For Our Rematch

Deontay Wilder has never been the jealous type. It doesn’t bother him to hear about Tyson Fury playing the World Wrestling Entertainment (WWE) circuit, as it was an opportunity once presented to him and one he will consider as a potential career path once he’s through with boxing.

For now, it’s means to help promote a future rematch with Fury while he focuses on another sequel directly ahead of him, as he faces Luis Ortiz for a second time on Nov. 23 at MGM Grand Garden Arena in Las Vegas, Nevada. It also provides Fury—as far as Wilder is concerned—the chance to do his part in the promotion

“That’s the reason he’s doing it, for promotion,” Alabama’s Wilder (41-0-1, 40KOs) claimed when asked about the scripted pro sport during a recent media conference call to discuss his Fox Sports Pay Per View heavyweight title fight rematch with Miami’s Ortiz (31-1, 26KOs; 2NCs).  “He’s getting his name bigger in America, which—you know, that’s a good route to take. WWE has millions upon millions of followers.

“That’s supposedly him trying to sell his name, especially coming from Vegas where he’s selling (in a) 20,000-seat facility, and he only selling 3,500 the first time and 1,500 the second time. The only time he sold however many tickets the first time because he was coming off the fight with me and they were trying to understand him. The second time, they understood that he was full of bulls*** and his sales went down.” 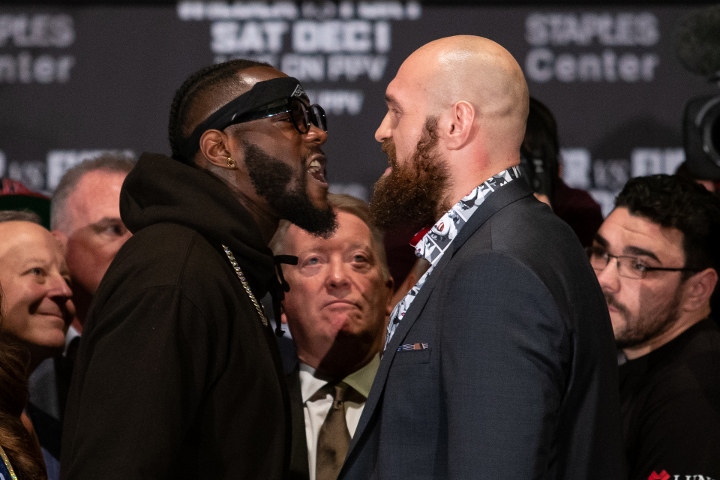 Wilder will put his own drawing power to the test, as he returns to Vegas for the first time since winning his heavyweight title nearly five years ago. His Jan. 2015 unanimous decision win over Bermane Stiverne took place at the MGM Grand, where he returns to attempt his 10th successful defense. He has become an established draw in his home market of Alabama—particularly in Birmingham, less than an hour from his Tuscaloosa hometown—and at Brooklyn, New York’s Barclays Center, having made four title defenses each in the two regions, all of which played to favorable crowds. As much was the case for his 12-round draw with England’s Fury (29-0-1, 20KOs) last December, with their Showtime Pay-Per-View headliner playing to an announced crowd of 17,698 at Staples Center in Los Angeles, California.

Wilder will fight for the second time since then, while Fury has taken aforementioned stay busy bouts with Schwarz and Wallin in efforts to further build his brand on ESPN+, with whom he signed through a promotional pact with Top Rank earlier this year.  The move came in lieu of a planned rematch, which Wilder—who fights under the Premier Boxing Champions (PBC) banner—was led to believe would have taken place this past May.

An audible was instead called, with the in-ring results hardly doing much to drum up any additional interest in a second fight than was already the case. His recent foray into WWE has kept Fury’s name in headlines.

“They’re trying to find some kind of way to market him for our rematch, you know,” insists Wilder. “They gonna tell the difference when I fight in Vegas, the difference between what I do and what he did. We’ll know for sure who sold the PPV and I guarantee you right now, it’s gonna be me.”

[QUOTE=Dle;20190061]Would Fury fight an aged Ortiz? I don’t think so. Would Fury fight Ruiz? These guys can box while Fury jive-Box & bs his way to victories.[/QUOTE] Ortiz is 50yrs old and Ruiz is a clinically obese bum. Fury would…

deontayduckus wilderquackus is the scientific name for that species of duck discovered out in The Great State Of Alabama.....it is known for quacking at very high decibels

Sorry Wilder, Fury isnt doing anything to market the rematch, he's just making tons of money while youre fighting a dud rematch, vs the AARP guy in Ortiz, for no reason at all. The market is ALREADY there for the…

I love Wilder. Brutally honest and hella entertaining to watch. When you have this many haters, clearly, you're doing something right. Let's go, champ!