Wilder Says He Would Be "Furious" in Oscar Rivas' Position

WBC heavyweight champion Deontay Wilder has continued to speak out on division rival Dillian Whyte, regarding the drug testing saga with respect to Saturday's fight with Oscar Rivas.

Whyte, 31, came up positive for a banned substance three days before his fight against Rivas at London's O2 Arena, which saw Whyte win on points.

The fight with Rivas was sanctioned by the WBC for their interim-title. 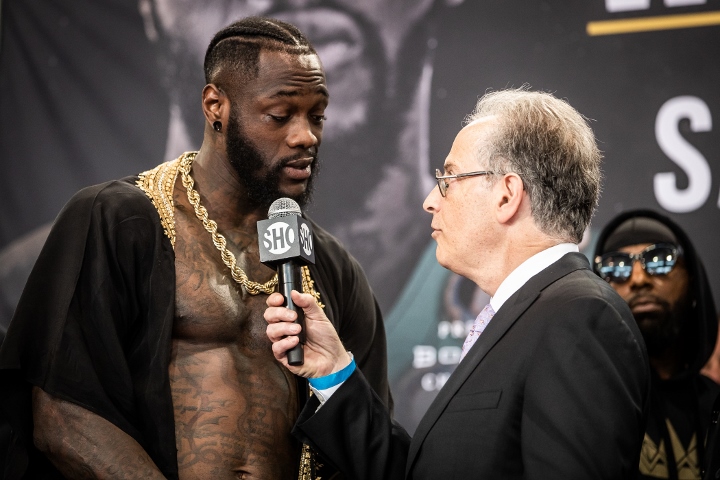 On Thursday, Whyte's promoter Eddie Hearn did not dispute that his boxer tested positive for a banned substance - but told iFL TV that Whyte was cleared to fight by an independent panel and "a process was adhered to".

Apparently, Whyte appeared at a hearing which took place on the day of the fight.

Rivas' promoter Yvon Michel told reporters that nobody from their camp was aware of what was happening until the story broke in the media. They were even unaware that Whyte appeared at a hearing on the day of the scheduled fight.

Wilder, visiting Britain this week, said in an interview with Talksport radio on Friday he would have been "furious" had he not been informed in similar circumstances.

"Look at the things that are going on. We're talking about these two other fighters who lost their lives," said Wilder, referring to the recent deaths of Argentine boxer Hugo Santillan and Russia's Maxim Dadashev.

"Boxing is in an emotional status right now. If it was me, I'd be thinking it could be me, too. I put my life on the line like everybody else. I'm human, too."

He added: "There have been reports that they knew three days prior to this fight happening what was going on and they didn't report it to the WBC or the opponent. If that is so and everything comes back positive, they are in for a massive lawsuit."

Whyte had previously served a doping suspension between 2012 and 2014.

nobody is flat out refusing that he took anything but just saying that things will become clearer.

As a guy from Montreal cheering for Rivas, I was disappointed by the result of the fight, but I was impressed by Whyte control of the fight. It didn't last long! I am disgusted Whyte is a cheater, he not…

Wow! While playing the part of the entitled disgruntled victim, this hypocrite fills his system with cheater fluid in an effort to fill his pockets!?!? For him & Eddie there was NO concern for ANY of the opponents - they…

[QUOTE=cameltoe;19937544]I’m not defending Whyte. If he fails the B test he deserves to be banned for life. But as an observation, it’s funny how Wilder is all of a sudden happy to talk about Whyte. A lot. Mofo wouldn’t even…

Wilder is right on this one. No way this fight should have went on without releasing that information to his opponent and to the world.