Wilder: Quick Turnaround For Fury Will Only Make Me Better

LAS VEGAS – Deontay Wilder won’t have much time to rest if his rematch with Tyson Fury isn’t pushed back from its tentative date of February 22. (photo by Ryan Hafey)

That date hasn’t been announced, but Wilder and Fury have publicly stated that they’re supposed to fight again that night. That would afford Wilder only 13 weeks between his seventh-round knockout of Luis Ortiz in their rematch and his second showdown with Fury.

Compared to what Wilder (42-0-1, 41 KOs) has become accustomed to doing, that’s a short amount of time following a long training camp and his second fight with Ortiz. Six months passed between Wilder’s first-round knockout of mandatory challenger Dominic Breazeale (20-2, 18 KOs) on May 18 at Barclays Center in Brooklyn and his stoppage of Ortiz (31-2, 26 KOs, 2 NC) on Saturday night at MGM Grand Garden Arena. 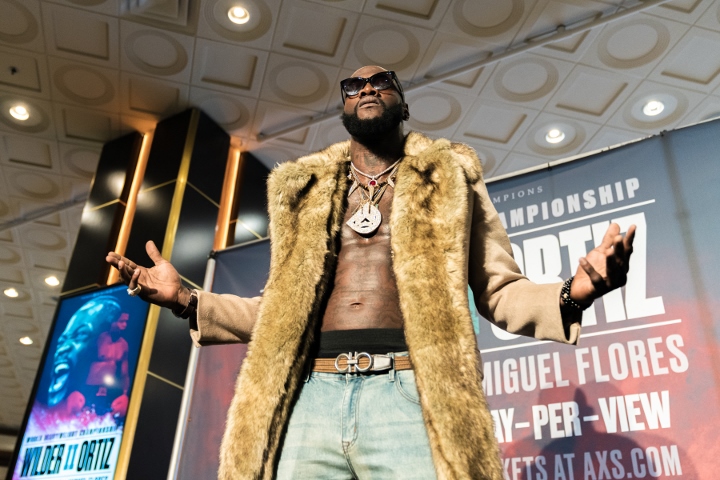 England’s Fury (29-0-1, 20 KOs), who suffered a significant cut over his right eye in his last bout, will be afforded five months between the time he defeated Swedish southpaw Otto Wallin (20-1, 13 KOs, 1 NC) by unanimous decision in their 12-rounder September 14 at T-Mobile Arena and the Wilder rematch. Wilder still is willing to fight Fury on February 22.

“Come February, I hope they’re ready, because I’m ready,” Wilder said during the post-fight press conference Saturday night. “You know, I’m in great shape. This is gonna be a quick turnaround for me. I haven’t done this since the beginning of my career. And this is only gonna make me better. You know, fighting the type of opposition that I’m fighting, doing it often and getting ready to go back in there in February again. So, I wish those guys good luck. I hope Ben took a lot of notes, because I’m ready.”

Wilder jokingly referred to Ben Davison, Fury’s trainer. Davison watched Wilder from a ringside seat as he erased a sizeable deficit on the scorecards to knock out the technically sound, strong Ortiz with one punch.

“Ortiz is a fantastic fighter, but he’s not Tyson Fury,” Davison told a group of reporters after Wilder’s win. “What stands out to me is this – what happened after Tyson got knocked down in the ninth? I’ll tell you. He got up and dominated the rest of the round. … But then he dominated 10 and 11. Going into the 12th, got knocked down in the 12th. What happened again, when he got back up? Dominated the rest of the round again. What that says to me there, is it was concentration for Tyson.”

Wilder’s concentration enabled him to unload his punishing right hand at the perfect moment Saturday night. Overall, however, Davison noticed a cautious champion who was concerned about a bigger rematch with Fury hanging in the balance.

“It looked like somebody who had the pressure of a big fight around the corner,” Davison said. “He didn’t wanna take any risks. He done what he’s supposed to do. He took his time, didn’t take any risks. He knew that Ortiz might be slowing down.”

“He didn’t do it in the most prettiest way,” Davison said. “But he done exactly what I thought he would do, just not in as stylish of a way. … With the tactics that Ortiz employed, I just feel that it was a matter of time before he [ran] into one.”

[QUOTE=robbyheartbaby;20216333]It's not a quick turnaround at all, Wilder can start camp first week of January and get 8 weeks in, this is standard more fighters should stay this active. It's nothing like Kovalev who went life and death in his…

[QUOTE=ShoulderRoll;20216126]Kovalev cried about the quick turnaround (AFTER he lost to Canelo of course, not before.) Yet here is Wilder saying he has no issue with it. And Andy Ruiz wasn't bothered by a quick turnaround when he flattened Joshua. It's…

It's not a quick turnaround at all, Wilder can start camp first week of January and get 8 weeks in, this is standard more fighters should stay this active. It's nothing like Kovalev who went life and death in his…