Wilder: No Regrets Over Saying Breazeale May Die on Saturday!

WBC heavyweight champion Deontay Wilder is not concerned with the backlash over his recent statements regarding the upcoming fight with Dominic Breazeale.

Wilder alarmed reporters on Tuesday, when he told them that he was still trying to get a "body on his record."

He will make a mandatory defense against Breazeale on Saturday night at the Barclays Center in Brooklyn, New York. 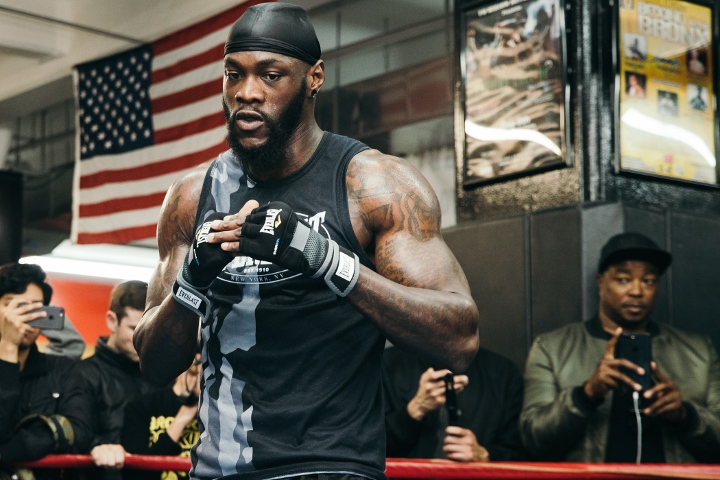 Wilder made it clear that Breazeale may very well lose his life when they clash in the ring.

"[Breazeale's] life is on the line for this fight and I do mean his life. I am still trying to get me a body on my record," Wilder said.

"Dominic Breazeale asked for this. I didn't go seek him. He [sought] me. So if it comes it comes. This is a brutal sport. This is not a gentleman sport. We don't ask to hit each other in the face but we do anyway. And you can ask any doctor around the world, he will tell you, your head is not meant to be hit.

"On this particular time we have bad blood against each other. This is the only sport where you can kill a man and get paid for it at the same time. It's legal. So why not use my right to do so?"

Wilder was confronted over the statements, where he was directly asked if he now regrets making those comments about Breazeale.

Wilder and Breazeale have been feuding for the last two years, after a confrontation back in 2017 in a hotel lobby in Alabama. Breazeale claims he was attacked by Wilder's brother. The incident led to a lawsuit, where Breazeale sued Wilder for damages.

[QUOTE=theface07;19762303]Joshua is a pansies? Is your first language English? If not, I understand. If it is, you should learn how to speak the language that is your native tongue.[/QUOTE] It's a simple typo idiot but I see how you conveniently…

[QUOTE=Tha Kid;19748245]You just mad Joshua proved to be a pansies like we've been trying to tell you for over 2 years 😂[/QUOTE] Joshua is a pansies? Is your first language English? If not, I understand. If it is, you should…

This reminds me of that Chappelle skit, 'when keeping it real goes wrong'.

[QUOTE=Tha Kid;19748285]That's what I thought 😂😂😂 Later pansie[/QUOTE] YOur a waste of fughin skin That’s exactly what I thought Get back to your keyboard you fughin waste of skin

[QUOTE=MulaKO;19748273]Yeah whatever jerkoff Your a waste of fughin skin What’s wrong your feelings hurt Fugh off you fughin inbred[/QUOTE] That's what I thought 😂😂😂 Later pansie