The unbeaten WBC heavyweight champion considers Joshua’s lack of confidence an irrefutable flaw that’ll lead to another knockout defeat for the former champ when he encounters Ruiz on December 7 in Diriyah, Saudi Arabia. But even if Ruiz beats Joshua again, Wilder will want to fight his heavyweight rival eventually.

“For sure,” Wilder told BoxingScene.com. “I’ll want to fight Joshua as long as he in the division. If he keep losing every time he fight, if it becomes like that, then that fight will never happen. But as far as now, there’s still an opportunity.” 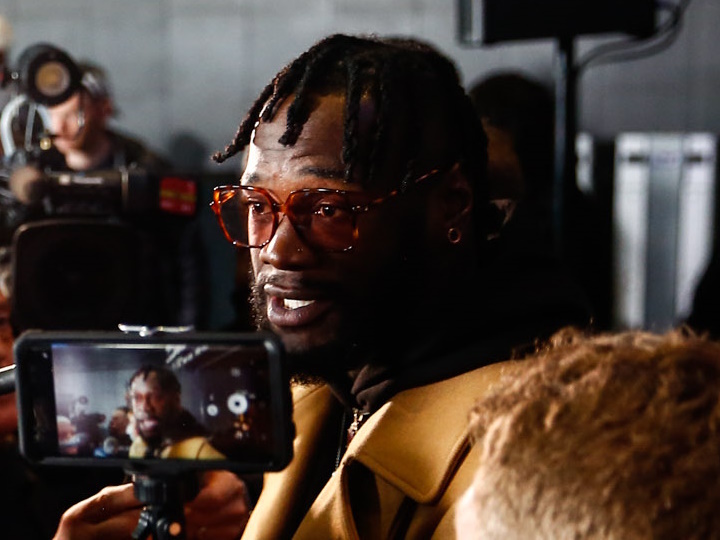 Joshua-Wilder was the most anticipated fight in boxing before Ruiz produced an epic upset June 1 at Madison Square Garden. It lost its luster once Ruiz knocked down Joshua four times and stopped the British superstar in the seventh round, but Wilder is convinced they can re-create a lot of interest in it at some point.

“Even if he loses against Ruiz, it’s still an opportunity,” said Wilder, who then would want to fight Ruiz first. “Even if he loses again to Ruiz, I still wanna fight him. But he can’t lose no more after that, or he’ll really, really be dropping. But it’s gonna be interesting to see what happens. He knows this is a crucial fight for him, that he must win this fight. I don’t think it’s over for him if he don’t win it, but it’s gonna be a long journey if he don’t win. We’ll see, but I still wanna fight him.”

If Wilder defeats Ortiz again, he is expected to fight Tyson Fury in another rematch that could take place February 22. England’s Fury (28-0-1, 20 KOs) would have to defeat Sweden’s Otto Wallin (20-0, 13 KOs, 1 NC) on Saturday night at T-Mobile Arena in Las Vegas to help keep his rematch with Wilder in place.

[QUOTE=factsarenice;20050595]Every time Wilder mentions Joshua's name I can't help but remember that he turned down a 12 million then 20, 50 and finally a $120 million dollar offer to fight Joshua and still refused. I really wish he would just…

[QUOTE=makaveli1875;20052465]Do you think by constantly repeating this 120 million BS people will believe it . Post a link to a credible source detailing this 120 million offer that was turned down and people might take it seriously. Truth is either…

aj fans are really hurt lmaoooooo look at them

[QUOTE=DaNeutral.;20052440]Yeah Joshua ducked Wilder, hid behind all those career high offers to Wilder including already signed contracts. Wilder turned down 120 million. You can pretend that didnt happen but to keep up your narrative you have to pretend that. And…

[QUOTE=Redd Foxx;20052423]It's an actual fact that people with usernames containing, "facts", "logic", and "truth" are the worst bullshytters on the forum. :D Seeing that is like a warning that you're about to read something worthless.[/QUOTE]Yes, I've noticed that! Thanks Foxx…