Wilder: I Put Fear In Any Man; No One Wants To Be Humiliated

Wilder offered a more generic response during a post-fight press conference early Sunday morning at Barclays Center in Brooklyn. The unbeaten WBC heavyweight champion did indicate, however, that seeing the 6-feet-7, 255-pound Breazeale sprawled out on the canvas won’t exactly help him land the fights he wants most – a long-awaited showdown with Joshua and a rematch with Tyson Fury.

“I put fear in any man,” Wilder said. “A lot of people say, ‘Fighters are not scared. You know, they can’t be scared.’ Well, you know, we’re human. We’re gonna have those tendencies of fear, until we get in the ring, and that’s how we overcome our fear. Everyone in this room is scared of something, you know? But there comes a time when we must face our fears. With me, no man wants to get humiliated on national TV, and their body drops like that.

“You know, you just never know what it’s gonna do after you get hit from a devastating punch. You can fall on your face. You can ball up. Your legs can bend, and you can fall out the ring. You know, many things different things, and no one wants that highlight on them because the way the Internet is set up right now, it’s undefeated. And it’s embarrassing to get in there.” 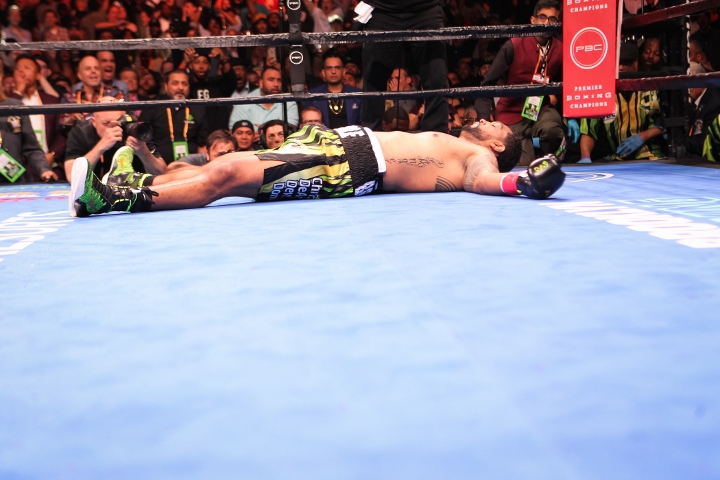 The 6-feet-7, 223-pound Wilder’s devastating right hand hit Breazeale (20-2, 18 KOs) on the left side of his head Saturday night and left him flat on his back. A discombobulated Breazeale tried to get up, but he failed to beat referee Harvey Dock’s count.

Their scheduled 12-round fight was halted just two minutes and 17 seconds into it.

Despite all the bad blood between Wilder (41-0-1, 40 KOs) and Breazeale before their fight, Wilder didn’t belittle Breazeale’s performance. Instead, Wilder praised Breazeale and the other 39 fighters he has knocked out.

“So, I would tell all my opponents, all fighters, to hold your head up high, you know? If you fail today, tomorrow is a new day and you can train and, like I say, you can apply your service and be great. But I’m a big threat to anybody in the heavyweight division, and each and every time I display that. Not only with my words, but with my actions as well.”

[QUOTE=Sid-Knee;19784438]Show me where Fury was concussed and not a silly childish story you want to create to make that coward look better[/QUOTE] Watch the last round of the Wilder-Fury fight. It was a double-punch combination that came out of nowhere,…

So much fear, Ortiz turned down $7m for another go!!! hahahahaha

Wilder does a fine job of humiliating himself.

[QUOTE=davefromvancouv;19781921]You need to go watch a Wilder fight. Because the more you see him, the more you realize why Joshua has been steered clear of Wilder until the very end. Even Fury understands why Joshua wants no part of that…

[QUOTE=STREET CLEANER;19779018]You are delusional. Look at your post. You and a few others just concentrating on the negotiations instead of the fight getting made. Deep listening to these snake promoters.[/QUOTE] Again you fail to answer simple questions because you know…