The 6-foot-7 Wilder (40-0, 39 KOs), of Tuscaloosa, Alabama, is after his eighth straight knockout in as many WBC title defenses against lineal champion Tyson Fury (27-0, 19 KOs) as a follow-up to “The Bronze Bomber’s” two-knockdown, 10th-round stoppage of Ortiz in March.

Wilder cut the deal to face 6-foot-9 Fury after failed negotiations to make a unification bout against the 6-foot-6 Joshua (22-0, 21 KOs), a 29-year-old who was buckled and suffered a first-round bloody nose during September’s two-knockdown seventh-round stoppage of former titleholder Alexander Povetkin (34-2, 24 KOs). 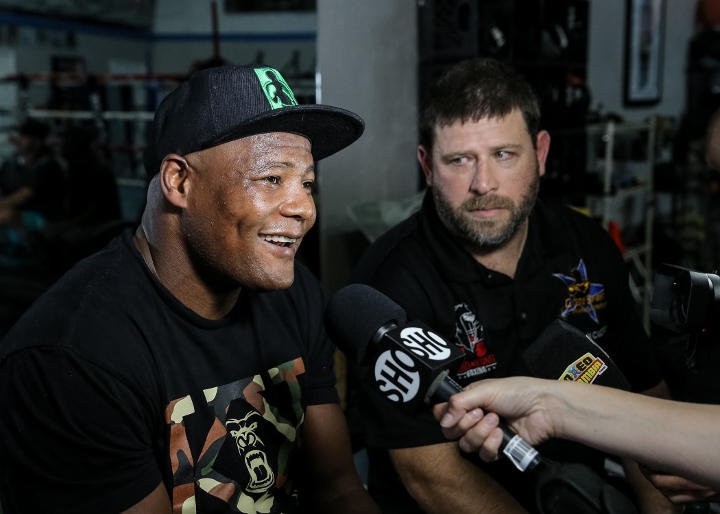 The 6-foot-4 Ortiz  (29-1, 25 KOs) rebounded from the loss to Wilder with a second-round KO of title challenger Razvan Cojanu (16-3, 9 KOs) in July, and will pursue his fourth stoppage in five fights against Travis Kauffman (32-2, 23 KOs) on the Wilder-Fury undercard.

“Wilder would knock out Joshua in three rounds. Wilder’s the faster and more aggressive of the two fighters,” said Ortiz prior to beating Cojanu, having staggered Wilder with several punches in the seventh round but failing to finish him.

Wilder was ringside in April 2017 at London’s Wembley Stadium as Joshua stopped 41-year-old Wladimir Klitschko, rising from the canvas in the sixth round and scoring knockdowns in the fifth and last rounds of his third defense and 11th-round TKO of Klitschko.

Joshua’s accomplishment was 17 months after a 39-year-old Klitschko was dethroned by the 30-year-old Fury, whose unanimous decision made him lineal and IBF/WBA/WBO champion.

“Wladimir Klitschko put Joshua on his [butt], and a younger Wladimir would have gotten him outta there. Wilder will not forget what Klitschko did to Joshua,” said Ortiz.

“So I see Wilder being all over him and Joshua hitting the floor. Joshua will have no answer for Wilder’s style, which is a crazy powerful approach coupled with his chin.”

Povetkin followed Joshua’s unanimous decision in March that added previously unbeaten Joseph Parker's WBO crown to his IBF and WBA titles. Cojanu had lost a 12-round unanimous decision to Parker in May 2017 before right facing Ortiz.

Ortiz stopped David Allen in the seventh-round on the December 2016 undercard of Joshua’s third-round knockout of Eric Molina in Manchester, England.

According to Ortiz’s manager, Jay Jiminez, “King Kong” fought Allen with the understanding that he  would next face Joshua in accordance with an agreement with Joshua’s promoter, Eddie Hearn.

“We already know the story of how they had that man [Ortiz] over there fighting like he was a clown, entertaining the people, promising him all types of s***. One thing I hate is unfulfilled promises. I come from the era of unfulfilled promises where people promise you things and they don’t come to pass,” said Wilder.

“And you’re sitting there, waiting. That’s what they did with Ortiz. They were scared of him. They wanted to hold him so they wouldn’t have to fight him. That’s just sad. That ain’t showing that you’re the best. I don’t think that [Joshua] has the heart and the mentality to prove that he’s the best, and if he does, then his people don’t.”

Wilder plans make a statement that he is the division’s No. 1 heavyweight by stopping Fury, who ended the 6-foot-6  Klitschko’s reign after 11 ½ years and a mark of 22-0 (15 KOs) during that time.

“As far as I’m concerned, this [fight] right here [Wilder-Fury] will tell the world who is the best of the best,” said Wilder. “I don’t feel that Joshua can beat me, nor can he beat Fury nor the second-best heavyweight in the world, Ortiz.”

[QUOTE=davefromvancouv;19284795]I agree. Joshua was on a serious roll but then the Povetkin fight was a big let down... I am routing for Wilder over Fury, but I'm nervous for Wilder. Fury is in great shape, is super motivated and is…

[QUOTE=aboutfkntime;19283977]good post, I agree ! Joshua - like so many others - let his momentum slip away I am riding with the gypsy king over Wilder Fury may have taken that fight too soon best of luck to both guys…

[QUOTE=davefromvancouv;19281874]It is a timeless tradition in boxing: avoid the best fighters until they get old or get beaten. Then attack their resume. Are you aware of this tactic? There are no set rules in boxing so the only time you…

[QUOTE=Sid-Knee;19282014]Yep, you're mad. No point in going over it like I have done so in the past because it serves no purpose. It's just a waste of my time. Believe what deluded nonsense you want to believe. Bye.[/QUOTE] Sorry. The…

[QUOTE=davefromvancouv;19282003]Absolutely. The Wilder-Fury winner deserves nothing less. Like I said, Joshua will only have Fury's belts. A fight against the lineal champion is a legacy fight. And both Wilder and Fury want nothing to do with Hearn negotiations. A 50/50…