NEW YORK – Deontay Wilder couldn’t quite believe it when Tyson Fury’s next opponent was revealed Friday.

Wilder figured Fury would take on someone at least more formidable than Tom Schwarz in his next fight. Otto Wallin, who’ll face Fury on September 14 at T-Mobile Arena in Las Vegas, is unbeaten, but, like Schwarz, the Swedish southpaw is untested against championship-caliber opposition.

“Oh my goodness,” Wilder told BoxingScene.com on Saturday night at Barclays Center. “I was just shaking my head. What in the world is he doing? His last fight was just a joke, and now this one.” 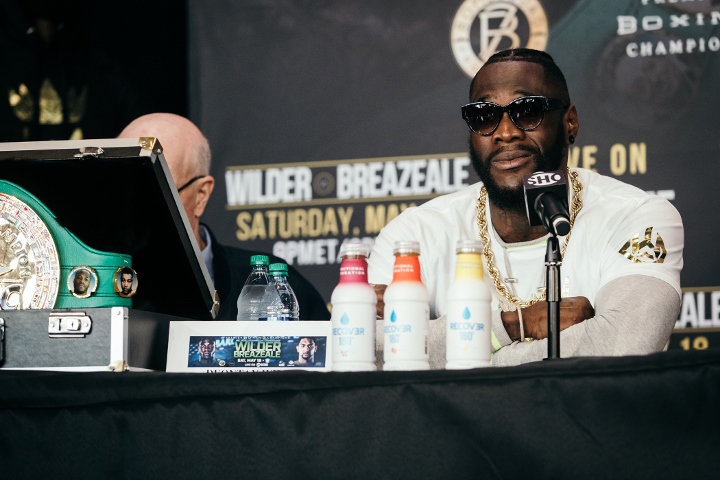 “With Fury, he’s a joke overall,” Wilder said. “This lineal stuff is crazy. It don’t look good for boxing to do that. And then you go and fight lower opposition. Like, who is this other guy [Wallin]? Everybody’s putting their titles on the line against tough opposition. But he’s not a champion, so we can understand his behavior and the selection of opponents he’s chosen.”

If Fury and Wilder are to fight again early in 2020, Wilder will have to defeat Luis Ortiz in what would be the WBC heavyweight champion’s first of back-to-back rematches. Wilder (41-0-1, 40 KOs), of Tuscaloosa, Alabama, and the Cuban-born Ortiz (31-1, 26 KOs, 2 NC) are likely to meet again November 9 in a Showtime Pay-Per-View main event.

Fury’s fight in advance of their rematch seemingly is much easier, but that doesn’t surprise Wilder. Once Fury demolished Germany’s Schwarz (24-1, 16 KOs) in the second round June 15 at MGM Grand Garden Arena, Wilder knew Arum’s matchmakers wouldn’t jeopardize their lucrative, pay-per-view rematch by having Fury face an opponent they think would have a chance to beat him.

“I gave Tyson Fury a concussion, so they’re making sure they get him to the prom,” said Wilder, who settled for a draw with Fury eight months ago in Los Angeles. “I’m his prom. So, they’re gonna make sure he gets there as safe as possible, with his marbles when he gets there. Because he knows when he fights me again, it’s over. Tyson Fury getting up [in the 12th round], it’s a blessing and a curse. The blessing part of it is it makes it controversial and the money goes up. The curse comes from when he was knocked into a concussion.

Fury. Where does he pick up these unknown names from?

[QUOTE=BoloShot;19965835]I don't usually agree with this clown but he's right here.[/QUOTE] No he's not , Fury isn't defending any belt there is no title defenses on the line in this one but what most fail to realize is Wallin is…

Wilder is 100% right. I've been critical of Wilder's boxing record so far but his is on god-level compared to Fury's recent efforts. Let's be honest the only reason Fury can get away with making these fights is because Fury…

[QUOTE=pollywog;19965354]Fury was prolly looking to line up AJ after the Ruiz fight for bigger money until the fat mexican kid stole his lunch money as well by knocking over the giant glass jawed robot. Now windmill and the gypsy king…

I don't usually agree with this clown but he's right here.