Wilder: Fury's A F***ing Coward If I've Ever Seen One

If Tyson Fury and Deontay Wilder win their upcoming fights, Wilder will get another opportunity to knock out Fury in their rematch.

They’re contractually committed to another fight for Wilder’s WBC heavyweight title, which could take place February 22 at an undetermined venue. Wilder, who’ll fight Luis Ortiz next, still is angered by Fury’s refusal to meet him in the immediate rematch Wilder expected following their split draw December 1 at Staples Center in Los Angeles.

The Alabama-based knockout artist thought they would box again May 18 at Barclays Center in Brooklyn. Fury walked away from those negotiations in February, just before a deal was finalized, because he signed a multi-fight agreement that made Bob Arum’s Top Rank Inc. his co-promoter and assured ESPN the rights to televise and stream his fights in the United States.

“I don’t know with these characters,” Wilder told BoxingScene.com. “I don’t know what they’re thinking. You know, it’s all fun and games to Tyson Fury. If it wasn’t fun and games for him, he would’ve rematched me instantly. If he had the heart of a warrior and a mindset of a warrior and a champion, he would’ve rematched me instantly. Not waited until someone came and saved him, so he can have an excuse to cop out of the rematch.” 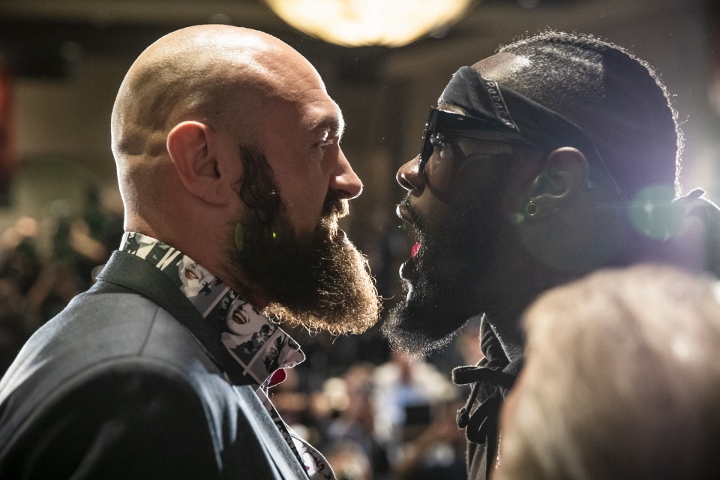 Once Wilder’s deal for an immediate rematch with Fury fell apart, it led to much lower-profile fights for each of them.

Wilder satisfied his mandatory obligation by knocking out Dominic Breazeale (20-2, 18 KOs) in the first round May 18 at Barclays Center. England’s Fury fought anonymous German Tom Schwarz (25-1, 17 KOs), whom Fury stopped in the second round June 15 at MGM Grand Garden Arena in Las Vegas.

“He knows he’s not getting $100 million, not even $80 million,” said Wilder, who floored Fury twice nine months ago. “And it probably ain’t even $70 million. His promoter [Arum] even said that himself. So, he wanna run around here like he getting a $100 million contract. That’s not true, but he wanna use that as a copout to not fight me. That’s a coward. That’s a f***ing coward if I’ve ever seen one. I’m just happy to be who I am. I can’t worry about these other fighters, or what they’re doing or what they’re thinking. Boxing, I love this sport, but you just don’t know what’s gonna happen until it happens.”

[QUOTE=Sid-Knee;20152881]No, you and the other mentally challenged idiot talk nonsense that I correct to clown you with. You've done nothing but make a fool out of yourself. Your country is so worthless, it creates most people like you with serious…

[QUOTE=Tha Kid;20142067]You just talk dude...just like you did with the other guy that was going to knock you out. Beat it....now you talking about I haven't boxed in years and its a home set up. You have got to be…

[QUOTE=Tha Kid;20142064]You haven't been in a boxing gym for years? ahahhahahahahha!!! Are you kidding me? A home set-up? Dude I've been boxing for 10 years continuously...STOP WASTING MY TIME. You want me to come to the UK to fight a…

[QUOTE=Tha Kid;20142059]Listen you delusional lil girl...AMERICANS dominate boxing. Now what are you going to say when Ruiz knocks your idol out once again :boxing: We can do lists all day but I will give you my top 5 American fighters…

[QUOTE=Sid-Knee;20141777]That "Nonsense" is all true. The madness on a creepy level from you is nonsense though. Still running away from listing all these wins over us even though you said you've got all day pages back? God you have no…