The two boxers collided last Saturday night at the Staples Center in Los Angeles, and the contest ended in a controversial twelve round split draw. The judges scored it 115-111 for Wilder, 114-112 for Fury and 113-113 for the draw.

Now the two heavyweights are looking to set the record straight in what is going to be a highly anticipated rematch. 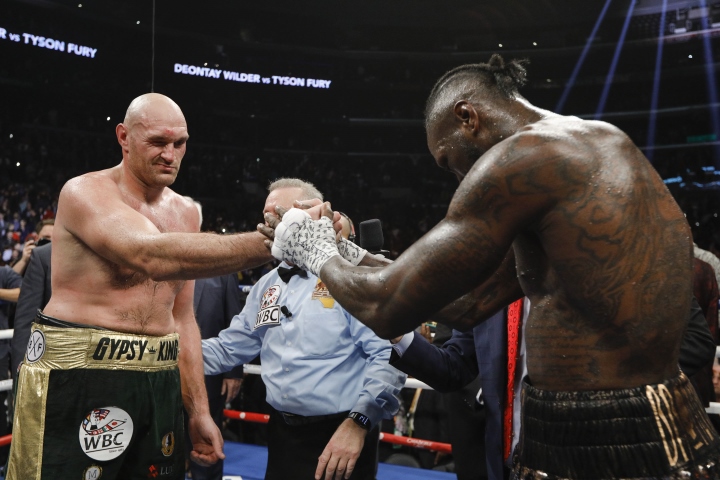 According to Warren, the rematch negotiations will begin in the coming days and he expects the deal to be finalized “sometime in January.”

A few days ago, the World Boxing Council unanimously voted to sanction an immediate rematch between the two super-sized fighters.

Warren is getting right to work on the rematch.

“We will start talks next week,” Warren said to Gareth Davies of The Telegraph. “Tyson Fury has been in camp for virtually a year so we need to give him a break for Christmas. We are pushing hard to have the rematch in the UK. We will look to do the fight sometime in the late spring 2019 and are looking at a stadium if it happens in the UK.

“If we can’t get it here, it may well go to Las Vegas. But we believe Fury is now in the driving seat. He is the No 1 heavyweight in the world. I said whoever won the fight would be the No 1 and in my eyes and those of numerous astute judges, we believe Fury did win the fight.”

After the rematch with Wilder, Warren is going to target a fight between Fury and IBF, IBO, WBA, WBO heavyweight world champion Anthony Joshua.

“That’s a huge fight as well. Tyson will be coming for Joshua, and he will have nowhere to hide," Warren said.

[QUOTE=Scipio2009;19344239]Fury didn't ask for $50m. If the guarantees reflect the split, the first fight was apparently 60/40 Wilder, and the rematch likely split 50/50. Share and share alike, on a fair split for both fighters, like a normal negotiation.[/QUOTE] So…

[QUOTE=EnglishOxide;19340248]If more Americans know Fury than AJ then maybe Fury should get that 50mill, yes?[/QUOTE] Fury didn't ask for $50m. If the guarantees reflect the split, the first fight was apparently 60/40 Wilder, and the rematch likely split 50/50. Share…

[QUOTE=Noelanthony;19343114]True...... but Ortiz is a nobody. The only offensive fighter ever to fight Wilder in his illustrious career and nearly knocked him out too.[/QUOTE] Nearly? ..wow.. Wilder didn't even go down. Ur showing ur true hate and fear of the…

[QUOTE=5000boxing;19342826]Lmao.. Number one vs number two.. will fight again in may.. who can your king fight next in april? Whyte or chisora?.. lol. Both get zero respect across the pond. I'll continue to watch the best fight the best. I'll…

Btw, there is a Warren interview on IFL TV. I can't watch it until after work, but I'm sure he will give some details on the rematch clause or where the fight will take place at.