LOS ANGELES – Tyson Fury and Frank Warren have the neutral group of officials they were assured for his fight against Deontay Wilder.

Reiss, of Oxnard, California, will officiate his first Fury fight. He has been the referee for four of Wilder’s fights, knockouts of Jason Gavern, Eric Molina, Johann Duhaupas and Chris Arreola. 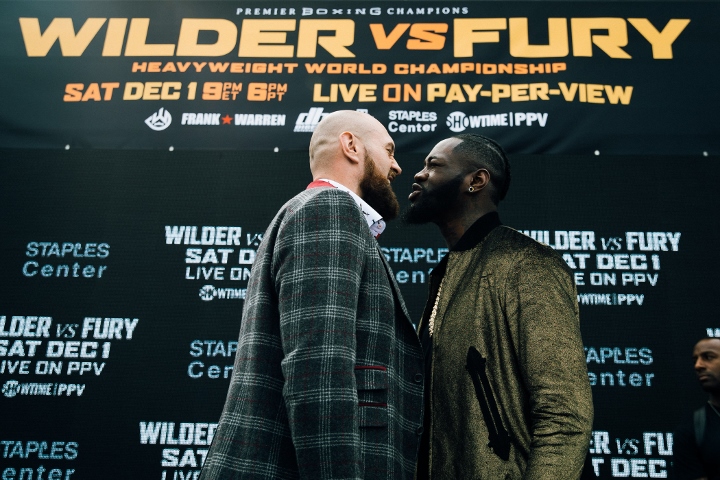 Edwards, of Preston, England, has worked four Fury fights – twice solely as a judge and twice as a referee/judge. In accordance with British Boxing Board of Control regulations, a referee also serves as the judge for non-title fights in the United Kingdom.

Edwards previously was assigned to judge one of Wilder’s fights. Wilder stopped England’s Audley Harrison in the first round of that April 2013 match at Sheffield Arena in Sheffield, England.

Rochin, of Chula Vista, California, and Tapper, of Winnipeg, Canada, have not judged fights involving Wilder or Fury.

Most recently, Edwards was the referee/judge of Fury’s technical knockout of Sefer Seferi on June 9 at Manchester Arena in Manchester, England. Fury’s first fight in 2½ years wasn’t remotely competitive and Switzerland’s Seferi (23-2-1, 21 KOs) declined to continue following the fourth round.

Edwards also judged both of Fury’s fights against Dereck Chisora.

Fury beat Chisora (29-8, 21 KOs) by technical knockout in their rematch because Chisora declined to continue after the 10th round of that November 2014 bout at Exhibition Centre London.

In his most noteworthy, recent title bout, Edwards scored American Maurice Hooker a 117-111 winner against Terry Flanagan. That 12-round fight for the then-vacant WBO junior welterweight title was contested June 9 at Manchester Arena in Manchester, England, Flanagan’s hometown.

Dallas’ Hooker (25-0-3, 17 KOs) won a split decision because Edwards and South Africa’s Deon Dwarte (115-113) scored that fight for him. A third judge, Illinois’ Jerry Jakubco, scored their competitive fight for Flanagan (117-111), who lost for the first time as a pro.

Rochin scored the most significant recent fight he judged, Brandon Adams-Shane Mosley Jr., a shutout for Adams (100-90) on November 9 at The Forum in Inglewood, California. Los Angeles’ Adams (21-2, 13 KOs) completely controlled the action against Mosley (11-3, 8 KOs) in their 10-round middleweight match, the finale of the fifth season of “The Contender.”

The only professional fight in which Wilder went the distance resulted in an easy victory for the 2008 Olympic bronze medalist.

Wilder defeated Bermane Stiverne by scores of 120-107, 119-108 and 118-109 in January 2015 to win the WBC title. He has knocked out seven straight opponents, including Stiverne in the first round of their rematch, since out-pointing Stiverne at MGM Grand Garden Arena in Las Vegas.

[QUOTE=Muz;19307741]Yes, allowed Ward to headbutt and hold without warning or DQ. A true paid off scumbag Haymon has to protect the great black hope Wilder.[/QUOTE] I was gonna ask whose pockets are they in--if anyone's? I guess you answered that…

[QUOTE=daggum;19301306]jack reiss is one of wards bag men that helped him cheat. this fights in the bag for wilder[/QUOTE] Yes, allowed Ward to headbutt and hold without warning or DQ. A true paid off scumbag Haymon has to protect the…

Don’t even see them being required

Least Fury has one guy on his side but I have a feeling this fight doesn't go to the score cards. One of them is winning by knockout.

Uh oh. Incoming excuses about "hometown judges" just like Pacquiao/Horn when there's a very good blend here as with there.