Two days after suffering his first defeat, Deontay Wilder was still trying to figure out why Mark Breland threw in the towel Saturday night.

Wilder has always instructed Breland, his longtime assistant trainer, and head trainer Jay Deas to never throw in the towel when he’s fighting. Deas also told Breland not to do that when Breland mentioned it as a possibility in Wilder’s corner while the former WBC heavyweight champion was taking unanswered punches from Tyson Fury during the seventh round.

Referee Kenny Bayless promptly stopped Wilder’s rematch versus Fury when Breland threw in the towel. When Wilder questioned Breland, the former WBA welterweight champion told the exasperated ex-champion he didn’t want Wilder to get seriously hurt by Fury in what had become a one-sided fight at MGM Grand Garden Arena in Las Vegas. 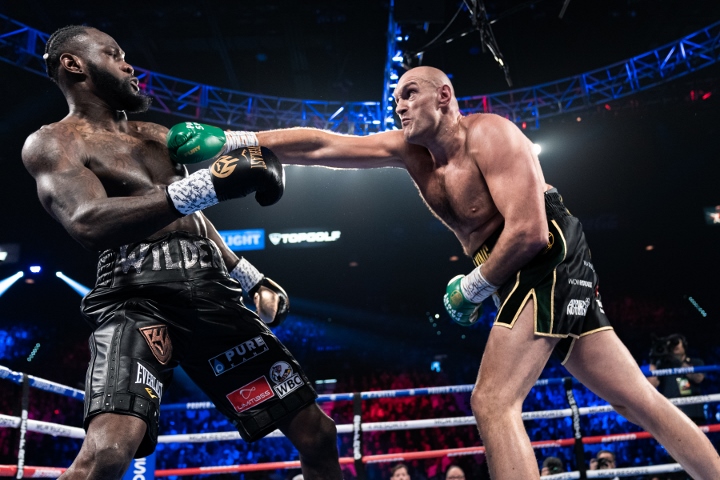 Wilder even suggested Breland was influenced to throw in the towel by Anthony Dirrell, who was seated near Wilder’s corner and, according to Wilder, repeatedly yelled for Wilder’s trainers to stop the fight. Anthony Dirrell, a former WBC super middleweight champion, is trained by Javan “Sugar Hill” Steward, Fury’s head trainer.

Wilder (42-1-1, 41 KOs) also revealed that he hasn’t determined whether he’ll continue working with Breland, who largely has been commended for preventing Wilder from taking too much punishment.

“It’s a human, immediate reaction, like, ‘I didn’t wanna see you get hurt,’ ” Wilder said to BoxingScene.com, referring to Breland’s explanation.

“But I was hurt way more in the first [Luis] Ortiz fight than in this situation. I still had my mind. I still knew what I was doing at certain times. I still knew how to move around the ring. Although I didn’t have the legs, I knew how to move around the ring. Sh-t, I was 42-0, you know, 10 consecutive title defenses. I know what I’m doing in there. It may look a certain type of way, but when you’re talking about a Deontay Wilder, I’m never out of a fight because of my tremendous power. We’ve seen that many a times. I’m never out of a fight. And I’d rather go out on my shield and my sword than anything. You know, by [Breland] knowing that and then Jay, which is the head trainer, Jay told him not to do so. He still proceeded with it. It’s kinda hurtful, man. It really makes you think about different things. I don’t wanna put negative thoughts in my head or have any kind of conspiracy theories going on, but it makes you think. Somebody that did not something that’s not up to him, and even when they’re instructed not to, they still proceeded on.

“And then getting influenced by the opposite team, one of the guys that train with the opposite trainer, you know, it makes you think. He was influenced by [Anthony] Dirrell. They said [Anthony] Dirrell was in back of him screaming, ‘Throw the towel in! We love our champ!’ And, you know, [Anthony] works with ‘Sugar’ as well, the opposite trainer, Tyson’s trainer. [Dirrell] works with him, too. [Breland] said he didn’t hear nothing, but everybody’s saying the same thing. A lot of people that’s around, a lot of people that was in my camp, and if everybody’s hearing it and if my people in the corner can hear him, and Mark said he can’t hear [him], there’s something wrong with that. It’s a lot going on with Mark as well. But, you know, we’re gonna make a big decision by the time I come back from Africa. And we’re gonna go from there.”

Wilder said he’ll decide Breland’s future with his team upon returning from a trip to Africa that he is supposed to take late in March.

[IMG]https://roundbyroundboxing.com/wp-content/uploads/2020/02/Deontay_Wilder_vs_Tyson_Fury_action6.jpg[/IMG] Had he not thrown in the towel, Wildling may very well still be in the hospital as we sit today.

[QUOTE=Robbie Barrett;20418404]Your boy was just inferior. He was a ray off hope for the real life skill less people. Now he's gone. Skills pay the bills.[/QUOTE] what are you skilled at besides being a troll and a snitch? Tell me…

[QUOTE=Pat2412;20422583]Wilder put heavy weight boxing back in the spotlight. Let the man vent. None of you keyboard warriors would get an elevator with Wilder. Give him a break. He has another chance to prove himself. Unless they buy him out…

Wilder put heavy weight boxing back in the spotlight. Let the man vent. None of you keyboard warriors would get an elevator with Wilder. Give him a break. He has another chance to prove himself. Unless they buy him out…