Wilder Admits: I Have a Lot of Flaws; I Don't Think I'm Untouchable

Deontay Wilder won’t hesitate to tell you about his pulverizing power or why he is the best heavyweight in the world.

Don’t take that to mean that the supremely confident WBC champion isn’t well aware of his weaknesses. Wilder understands that any boxer is beatable, particularly within the dangerous division where gigantic, strong opponents attempt to knock you unconscious.

Wilder, who’ll defend his title against Cuban southpaw Luis Ortiz on Saturday night, discussed his vulnerabilities during a radio interview this week with ESPN’s Stephen A. Smith. 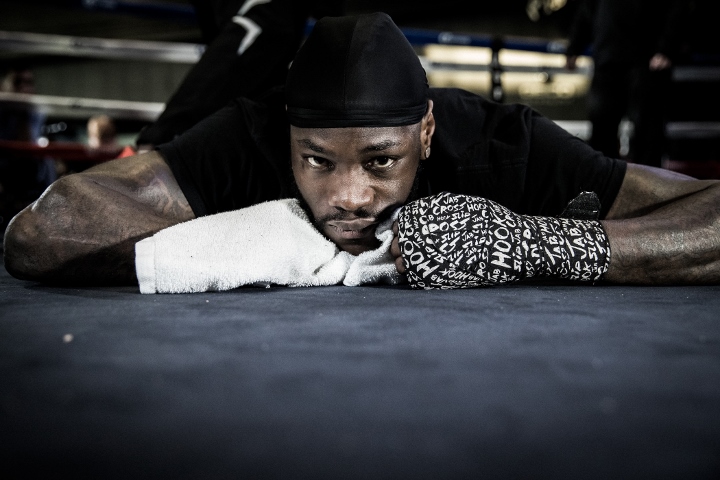 “I train for everything,” Wilder said. “People ask me what’s my flaws? Everything is my flaws. I don’t just think that I’m just this untouchable guy, although I speak with positivity and I believe strongly in myself. Of course I have a lot of flaws, but I’m definitely here. And it’s the saying, if it ain’t broken, then why fix it?

Detractors have criticized Wilder for lacking technique, having bad balance and swinging wildly at times. His technical flaws aside, the undefeated Wilder has won 38 of his 39 professional fights by knockout and is at least in position to secure an eight-figure payday for a heavyweight title unification fight against British superstar Anthony Joshua (20-0, 20 KOs), the IBF/IBO/WBA champ.

“When it comes to the heavyweight division, I’m definitely at the top,” Wilder said. “Ain’t nobody knocking guys out like I’m doing. I don’t do TKOs. I’m strictly a KO fighter. I don’t have to have a ref to step in at times to stop my fights. You know immediately – the way I hit a guy and the way he falls, whether he’s shivering on the [canvas] or whether he’s sitting there, looking like he’s dead for a couple of seconds, that was a Deontay Wilder event. And that’s what I do.”

Showtime will air Wilder’s title defense against Miami’s Ortiz (28-0, 24 KOs, 2 NC) as the main event of a doubleheader from Barclays Center. The telecast is set to begin at 9 p.m. ET with a 12-round rematch between Andre Dirrell (26-2, 16 KOs), of Flint, Michigan, and Venezuela’s Jose Uzcategui (26-2, 22 KOs) for the IBF interim super middleweight title.

[QUOTE=Raggamuffin;18531572]How many ****en alts are you going to crawl under at the expense of dick blowing Joshua damn, lmmfao!!!???[/QUOTE] Paranoid racist chump. Here is your bum wilder on his hype job butt. Your great urban hope....[IMG]http://pbs.twimg.com/media/CVV6fqvUsAAT9Nf.png[/IMG][/IMG]

Spoken like a true student of the game. :boxing: Has there ever been a more humble heavyweight champ in the last 20 years?

[QUOTE=Factual Voice;18530424]Ortiz is taking a dive or else he never gets this payday from Haymon. Think about it. Wilder leaves 4 million on the table to fight ortiz instead of Dylan Whyte and then a Joshua follow up. This is…