Hearn has a good relationship with UFC President Dana White and plans to speak with him about the cross-sport match.

At the moment, Whyte is preparing himself for a rescheduled clash with former WBA world champion Alexander Povetkin - which is being targeted for late July or early August.

The contest was initially scheduled to take place this month, but it was postponed due to the coronavirus pandemic. 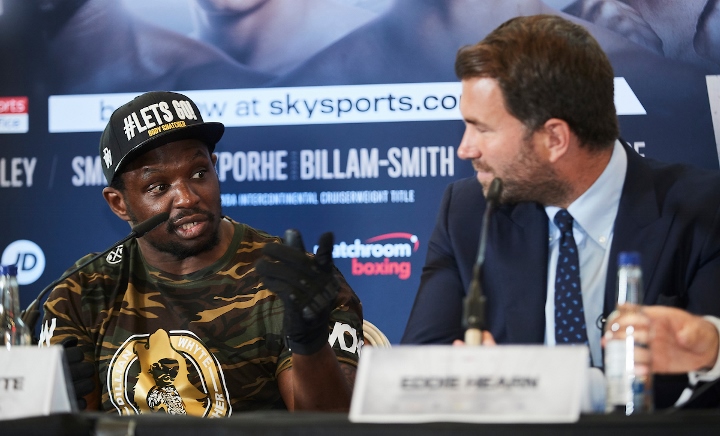 In the last few weeks, Whyte and Ngannou have been trading words through the media.

Both fighters are open to the idea of facing each other in a boxing match.

If the fight comes together, Hearn would like to see it happen at the end of the year.

Back in August 2017, UFC superstar Conor McGregor stepped in a boxing ring to challenge five division champion Floyd Mayweather. Their event, which saw Mayweather stop McGregor in ten rounds, generated the second highest pay-per-view buyrate in history - as fans of both disciples united to purchase the PPV.

"I never really thought we would take this too seriously, but in the last week we have to take this seriously," Hearn told Sky Sports.

"The aim for Dillian Whyte is to become a world boxing champion, but I wouldn't be surprised at all to see Dillian Whyte against Ngannou towards the end of this year. Obviously we know Povetkin is next, but whether it's October, November, December.

"There's not just interest online, there is huge interest everywhere for that fight. When I first started discussing it, it was just something that had been mentioned. Fans of both disciplines have always said: 'Whyte against Ngannou is a cracker'. I've started to receive a lot of interest from numerous people about staging that fight now. I think it does colossal numbers.

Good matchup but if it would happen, it's got to be an MMA bout and the rematch should be in ring with boxing rules. Whyte possesses that big overhead right punch while Ngannou has a special left upper cut. Make…

This new buzz phrase " reaching out " , it simply means " my sport and TV need help " . It's begging for business in an embarrassing way , why not all just be honest and say we all…