Whyte: Rivas is High-Risk Fight, But I'll Try To Knock Him Out

British heavyweight Whyte is ranked number one by the WBC but missed out on a shot at champion Deontay Wilder, when the sanctioning body ordered Wilder to defend his title against Dominic Breazeale instead.

The 31-year-old – nicknamed 'The Body Snatcher' – will put his status with the WBC on the line when he tops the bill in London against Rivas, who stopped Bryant Jennings in the final round of their clash back in January. 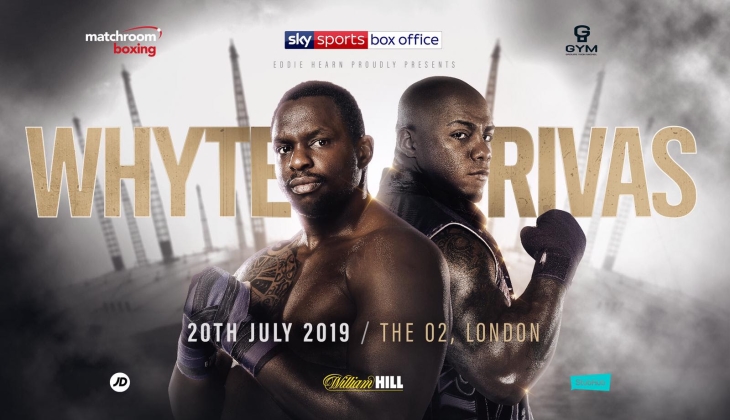 Whyte recorded wins over Lucas Browne, Joseph Parker and Dereck Chisora in 2018, improving his record to 25-1, and is looking forward to his first outing this year.

Despite the punching power of Rivas, Whyte also has power in his hands and plans to go for the knockout when they meet inside the ring.

He's confident that Rivas will go down or get hurt at some point in the contest.

"He'll be a tough man. Coming from Colombia, it's not an easy place. I'm sure he's been through his fair bit of ups and downs. I expect him to be confident and be quite confrontational and be up for it," Whyte told Sky Sports.

"You're coming to the lion's den, you're coming to my hunting ground, and once you step into my hunting ground you become prey. He's going to be trying to knock me out and I'm definitely going to try to knock him out. Everyone I have fought has either been knocked down, or been knocked out, or been hurt badly at some stage, so I have to once again go to the well and prove myself again, but that's good. Nothing great comes easy.

"It was a good win, a very good win. I actually watched the fight. At that time, he wasn't even considered as an opponent. Bryant Jennings is a very fit guy, in shape, and he outworked him and overpowered him down the stretch. He's hungry and he put a lot of graft in, he fought well, and he was very aggressive in the fight. It is a very high-risk fight. Oscar Rivas is the most dangerous out of the lot of them."

[QUOTE=_Rexy_;19696245]Well, nobody knows boxing like you, Sid. It’s not that half the site has you blocked for being an idiot, it’s that we just can’t argue with your sound logic,[/QUOTE] Who cares if the biggest trolls on here block me?…

[QUOTE=_Rexy_;19696242]Yeah, Browne sure looked fresher weighing twenty pounds heavier against whyte. Jesus, get his **** out of your mouth.[/QUOTE] I said he was fresher, not fitter. That KO can't have done him any good. At least with Whyte he seemed…

[QUOTE=Sid-Knee;19694786]Chisora who has a lot more energy, pressure, combinations and power couldn't get him out of there with body shots but the lazy lighter hitter who works at a snail pace will? Well you're going to be disappointed. Whyte will…

[QUOTE=Sid-Knee;19694807]How, Whyte beat Allen you clown. He also fought a fresher Browne. Now you can get back to smoking your meth.[/QUOTE] Yeah, Browne sure looked fresher weighing twenty pounds heavier against whyte. Jesus, get his **** out of your mouth.

[QUOTE=archiemoore1;19693790]I have great respect for whyte for fighting all comers and for his honest assessment of rivas. He's not delusional like some fighters. He knows the risk and is taking it head on. I think this fight a toss up…