The British Boxing Board of Control has extended its suspension of all boxing cards until the end of May due to the ongoing coronavirus pandemic, effectively pulling the plug on both of Matchroom Boxing’s two scheduled pay-per-view heavyweight events during that month.

Ukraine’s Oleksandr Usyk, the former undisputed cruiserweight champ, was scheduled to face Dereck Chisora on May 23 at the O2 Arena in  London. 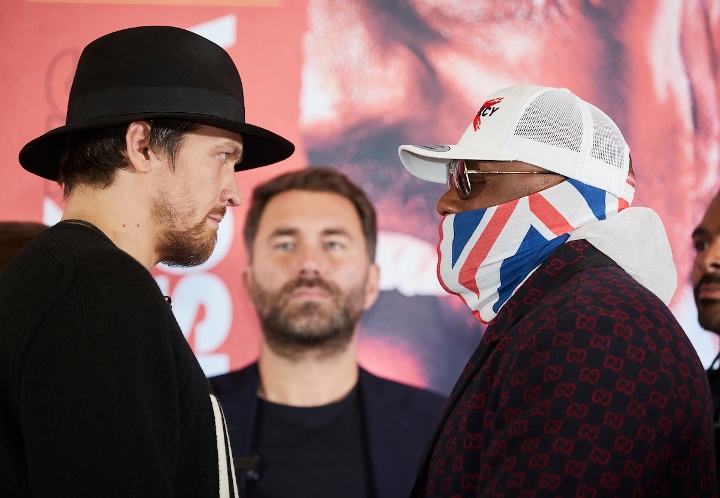 Serrano had already revealed via Twitter that her fight had been postponed, with an announcement expected on Monday.

Whyte had been in training camp in Portugal. He drove 40 hours from London to get there, so he would not be separated from his pet dogs in the event that he was unable to travel back.

It is the second time the BBBoC has extended its suspension on all shows. All people in the United Kingdom have been told to stay at home and gatherings of more than two people have been banned as the government tries to control to spread of the pandemic, which has claimed more than 1,200 lives in the country.

“We will continue to follow the government and medical authorities’ advice and keep the situation under review and, when possible, explore all options available to find a way of lifting the suspension when conditions permit,” Robert Smith, the BBBoC general secretary, said in a statement. “We would like to re-emphasise that our thoughts are with everyone affected by COVID-19.”

Matchroom Boxing has already rescheduled two of its three cards originally due to take place in May. Whyte-Povetkin has been rescheduled to July 4, while a lightweight title eliminator between Lee Selby and George Kambosos Jr.—previously slated for May 9 at Motorpoint Arena in Cardiff, Wales—will now move to July 11.

Per Matchroom, existing tickets will remain valid for the rescheduled dates. Fans will also have the option to request a refund. The same will apply for Usyk-Chisora, which is still in search of a new fight date as this goes to publish.

This was expected, but hurt the same. :grr:

[QUOTE=mawoodhouse;20489051]With no live gate how is a studio fight behind closed doors going to pay all the expenses of paying the fighters etc?? Obviously they will rack up the prices of ppv to over $100 I would imagine in the…

With no live gate how is a studio fight behind closed doors going to pay all the expenses of paying the fighters etc?? Obviously they will rack up the prices of ppv to over $100 I would imagine in the…

The idea of studio fights without an audience is becoming more and more like the way.