Dillian Whyte respects Oleksandr Usyk’s skill set, intelligence in the ring and his impressive resume as a cruiserweight.

Whyte still isn’t sold on Usyk’s potential to win a world title in the division in which Whyte makes his living. The unbeaten Ukrainian southpaw would have to fight someone other than Anthony Joshua or Tyson Fury to eventually become a heavyweight champion, according to Whyte.

The boisterous Brit broke down Usyk’s chances during an interview with Sky Sports’ Adam Smith and his promoter, Eddie Hearn, which appeared on Matchroom Boxing’s YouTube channel recently. 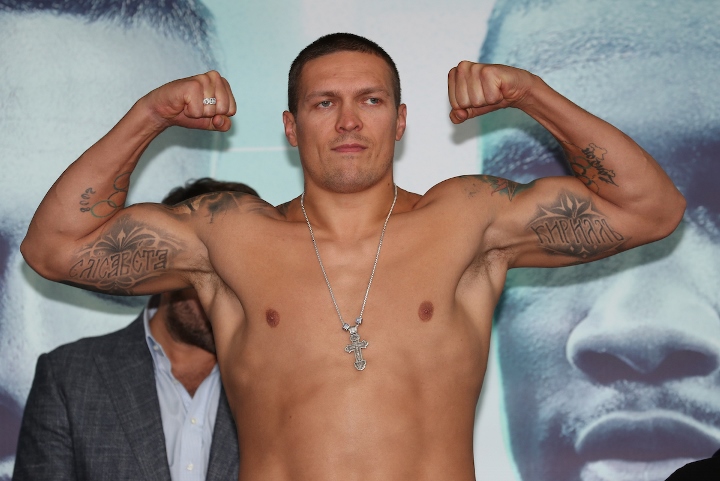 Whyte feels such success would require a change at the top of the division, though.

“But right now, I can’t see him beating any of the champions,” Whyte explained. “I don’t think he’s physically strong enough. Obviously, he’s got the skills and he’s got the boxing technique. But I don’t think he’s physically strong enough and big enough. I, personally, don’t think so. You’re not gonna out-move Anthony Joshua, Dillian Whyte, Tyson Fury for 12 rounds. We will catch up to you at some point. And we will learn at some point.”

The 33-year-old Usyk (17-0, 13 KOs) stands 6-feet-3 and weighed 215 pounds for his heavyweight fight October 12 in Chicago, a technical knockout of American veteran Chazz Witherspoon after the seventh round.

Joshua (23-1, 21 KOs), the IBF/IBO/WBA/WBO champion, is 6-feet-6 and weighed in at 237 pounds for his 12-round, unanimous-decision win against Andy Ruiz Jr. in their immediate rematch December 7 in Diriyah, Saudi Arabia. Fury (30-0-1, 21 KOs), the WBC champ, stands 6-feet-9 and got on the scale at 273 pounds for his seventh-round stoppage of Deontay Wilder in the rematch February 22 in Las Vegas.

The 2012 Olympic gold medalist is expected to battle British veteran Derek Chisora (32-9, 23 KOs) when fights can be scheduled again. Usyk and Chisora were supposed to meet May 23 at O2 Arena in London, but their 12-round fight was postponed indefinitely due to the COVID-19 pandemic.

Whyte, meanwhile, is tentatively scheduled to face former WBA heavyweight champion Alexander Povetkin on July 4 at Manchester Arena in Manchester, England. Whyte (27-1, 18 KOs) was supposed to oppose Povetkin (35-2-1, 24 KOs) on May 23 at Manchester Arena for the WBC interim championship.

[QUOTE=The Ox;20547759]And Wilder[/QUOTE] Can imagine Wilder avoiding Usyk like he does a 'free weight' squat.

[QUOTE=Ant1979;20546668]I think he's got a great chance but only after the titles become fragmented again. Fury may only be motivated for 2 more fights and if he wins them both and walks away (fair possibility) they'll all be up for…