He believes the IBF, WBA, WBO, IBO world champion is now at the point of avoiding danger and taking easier fights for big bucks.

Last month, Whyte knocked out Dereck Chisora in their anticipated rematch at the O2 Arena in London. Joshua was watching from ringside and called for a second fight with Whyte. 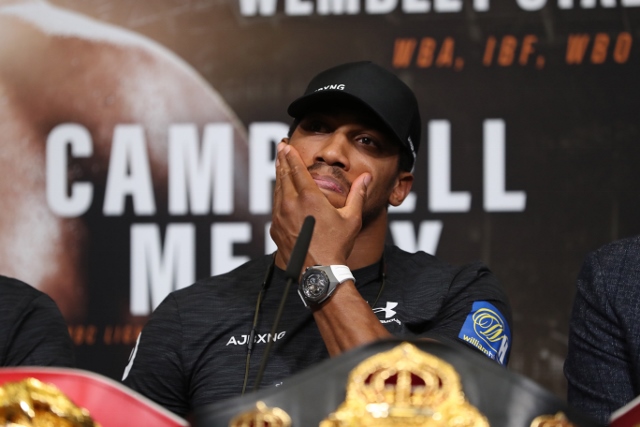 Based on what happened, it appeared that Whyte was on track to face Joshua in a rematch on April 13th at Wembley Stadium in London.

But as previously reported, Whyte is no longer sure of getting that rematch. He's heard the circulating industry chatter of Joshua potentially making his American debut by facing Jarrell Miller at Madison Square Garden in New York City on date in May.

Whyte is questioning some of Joshua's statements and recent decisions, like rejecting a $50 million offer to face WBC champion Deontay Wilder.

“I called him out there live thinking the fight could be made and I was very disappointed with Anthony’s response. I was ready for him to say ‘Okay, let’s get it on’. Wilder is not going to fight him because he doesn’t want it and is fighting Tyson Fury. But from his answer – and the way he was acting – I think AJ might want the fight, but I don’t think his team wants the fight," Whyte told Adam Catterall of The Sports Bar on Talk Sport.

“I think AJ is going into the business now thinking ‘I can have mediocre, easy fights and still make a load of money’ so why not? Realistically, if he wanted to fight Wilder... after Wilder came over with the $50 million he still didn’t want to fight him. He had whatever excuse he had for why the Wilder fight didn’t happen. First he said he wanted to fight Tyson Fury before Tyson Fury came back.

“But now Tyson Fury has come back with a good performance against Wilder all of a sudden he is saying ‘Oh, now I want to fight Wilder because Tyson Fury lost’. But I didn’t think Tyson Fury did himself any injustice in that fight. If anything, I thought he put on a great performance and he boxed well.”

[QUOTE=Jkp;19422164]To be fair, wlad fury,wilder, oritiz never got concussed by an illegal head butt, and then had it ruled and scored as a legitimate knock down. Thats a completely different scenario.[/QUOTE] Yeah, that was bulls***. Parker didn't really wake the…

[QUOTE=Laligalaliga;19421252]Lolx.... It's funny thou. I would have loved him to go wilder's direction. Lemme see how wilder reacts to that left hook.[/QUOTE] Im not a wilder fan. But a clumsy slow whyte won't be landing much on wilder. Completely different…

[QUOTE=Ake-Dawg;19421395]I think there are some that believe that Team Joshua has no real ambition to make the fight with Wilder and that by default, in the absence of a Fury rematch, Wilder will fight his mandatory Breazeale to get it…