Top heavyweight contender Dillian Whyte is looking to return to the ring in the early months of 2020 - and has four opponents in mind.

Whyte saw action earlier this month in Saudi Arabia, when he won a tough ten round unanimous decision over Mariusz Wach of Poland. The contest was part of the undercard to the Anthony Joshua vs. Andy Ruiz rematch.

The British boxer is aiming to secure a return date in March or April. 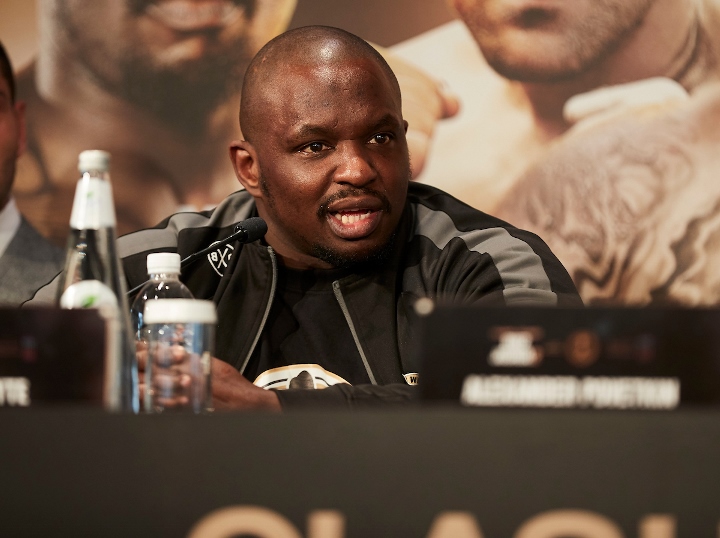 "I would like to be out at the end of March, or early April," Whyte told Sky Sports.

"I'll be ready to go. I'm having my final week off, then back to training, I'll be training over Christmas. Let's start planning, so we can build a good event and get a good fight. A fight that I've got notice for and I can train for. Make it another spectacle in London.

"Povetkin, Ruiz Jr and Otto Wallin. Those are the kind of fights. Even Manuel Charr for the WBA 'regular' title, if he wants it. That's a great fight. Charr would be a good one."

Whyte has been the WBC's number one contender for two years. He's been passed over, more than once, in favor of other boxers in their rankings. He recently reclaimed the WBC's interim-title - after being cleared by UKAD with respect to an adverse test result.

Wilder defends his title against Tyson Fury in a rematch on February 22. Regardless of the outcome, both sides are looking at a trilogy fight by the summer.

The winner of that two fight series must make a mandatory defense against Whyte by February of 2021 or face the possibility of losing their belt.

Should Wilder come away with the belt, Whyte is not holding his breath on landing that fight.

"I'm not confident of anything to do with Deontay Wilder anymore," said Whyte.

"The WBC want me to fight, I want the fight, I'm mandatory, but Deontay Wilder don't want to fight. What more can I do? I can't do any more. Deontay Wilder is a coward. He's a proper coward."

[QUOTE=tokon;20269193]What about Ortiz? Or Michael Hunter? I think both would take a fight with Whyte.[/QUOTE] I don’t think hunter would fare well with Whyte, he’ s got no power at heavy

I think Whyte has faced some pretty damn decent opposition but clearly isn't squeaky clean. He will happily prioritize money over anything else and that's his right considering he's a PPV fighter. I mean he said no to the Aj…

[QUOTE=Oshio;20270977]Ortiz? He's a nobody heavyweight. Whyte has faced better opponents than Fury and Wilder put together[/QUOTE] Who? They only decent fighter he's beaten is parker by illegal head butt. And he still almost died doing that. Chisora and his 9…

[QUOTE=Ray*;20270492]None of them are bad fights, Ortiz is the one I want to see if those fights doe. He needs names on his resume. Also Parker needs a fight, him and Rivas would be a good scrap.[/QUOTE] Anyone vs otto…