Dillian Whyte says he was enraged when he heard that a two-fight deal agreed for Tyson Fury to face Anthony Joshua and has questioned whether Eddie Hearn has done enough to push the case for him to get a shot at Fury’s WBC heavyweight title before Joshua.

Whyte faces Alexander Povetkin, the former WBA champion from Russia, on August 22 in the final show of Matchroom’s Fight Camp Series, which will be screened in the UK on Sky Sports Box Office. Originally scheduled for Manchester in May, it will be the biggest fight attempted behind-closed-doors since the coronavirus lockdown.

Whyte has been training in Portugal since May, but it was impossible to ignore the headlines about a Joshua-Fury deal, which threatened to delay Whyte’s overdue WBC title shot even longer.

“I got straight on the phone to Eddie Hearn and the WBC and asked them what was going on. They already took my mandatory unjustifiably before and now there were trying to shaft me again. I was enraged.” 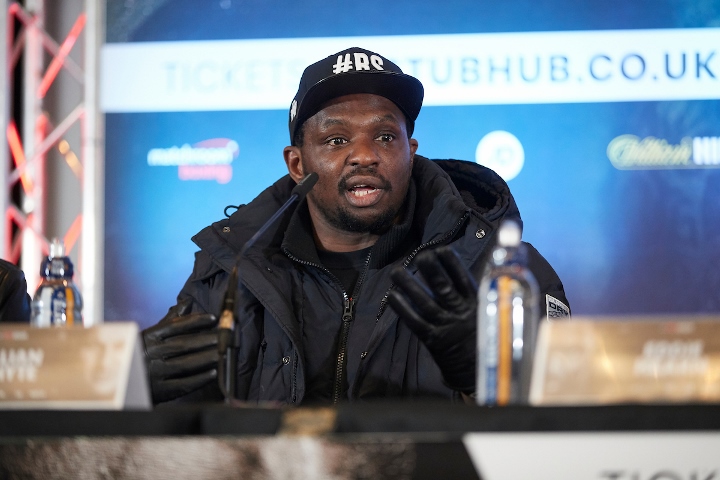 Whyte holds the interim WBC title, but has been told he should get his chance at the real thing by February, but all the talk of Joshua and Fury meeting twice in 2021 ignored his claims. Suggestions that Fury could be made “franchise champion”, leaving Whyte to box for the belt, did not please him either.

“I have waited a long time, then Bob Arum was bragging about ‘Dillian needs to fall in line, otherwise we are going to get Tyson made franchise’. That is too far. The belt can’t go from one coward to another coward. Something needs to change. I’ve had enough. Enough is enough.

“It was frustrating because I’d done everything that was asked of me and more, I’ve beaten more top ten contenders than Wilder and Fury put together. I thought this is enough and we had to do something now.”

Whyte says that he has been assured by Mauricio Sulaiman, the WBC president, that the original timetable was still in place that would see Whyte get his shot by the end of February next year, however unlikely that might seem at the moment. Even if there is a small delay, he is unlikely to object if he kept his place in line.

“The plan is to fight Fury in the first half of next year,” Whyte said. “That’s the plan and that’s what Mauricio is saying. I’m the mandatory and this is the day that is set, it’s February 2021 and I must get my fight by then, but I have heard a lot of things and it is hard to say you can bank on this.

“Fury might get injured in the Wilder fight or Wilder might knock him out, you never know. Anything is possible and it might take longer but that’s the hope and that is the guarantee. My team is still sorting out the nitty-gritty.”

Part of Whyte’s problem is that his promoter, Hearn, also promotes Joshua and has to walk a delicate line between the pair.

“He has to keep Joshua happy, he's the golden boy at the minute so he has the world champion and he has the No 1 contender to keep happy,” Whyte said. “It has been hard for him and frustrating for me, but it is business.

With so much on the line, many believe Whyte could be taking a chance by facing a fighter as dangerous as Povetkin, even if the Russian will be a few days short of his 41st birthday when they meet.

“Everyone I have faced has been dangerous,” Whyte said. “I have been the underdog in a lot of my recent fights but he is the most seasoned guy I have fought and has the most decorated pedigree, he's a former world champion and Olympic gold medallist, he is very tough and strong man.

“He has massive power, we have a similar style, we are big hookers and front-foot fighters. He has a lot of ambition left after the Hughie Fury win and the draw with Michael Hunter. He has a lot left in the tank.

“He knows what's at stake. If he beats me, he gets a major pay day and another shot at a world title. This is probably going to be the best Povetkin we have seen.

“I don’t take any fight lightly. At heavyweight, a single punch up the side of your head can send you spinning like a wheel. People are judging me on my last fight but I was out of shape and my head wasn’t right, but I still won nine out of 10 rounds, When I train right, I am too much for these guys.

“It has been a long, hard, rocky, up and down road. It has made a story. When I get a WBC title shot and win the title it will make it even better.”

[QUOTE=YoungHoff;20639487]Didnt he decline a final eliminator fight vs Ortiz? Didnt he decline the fight vs Joshua after that Big Juicer Baby was busted? I dont know man, all I hear is him talk but backing out when it could get…

[QUOTE=Plick647;20640320]lol pulling a Shannon Briggs!?[/QUOTE] Better than making outrages tweets like a high school student. Nobody cares about articles, nobody cares about tweets 'Confront your opponent in physical reality'.

[QUOTE=YoungHoff;20639487]Didnt he decline a final eliminator fight vs Ortiz? Didnt he decline the fight vs Joshua after that Big Juicer Baby was busted? I dont know man, all I hear is him talk but backing out when it could get…