Why Are So Many Boxing Fans Still Drawn To Adrien Broner?

LAS VEGAS – An annoyed Adrien Broner looked around an expansive theater inside MGM Grand and decided it wasn’t big enough for a star his size.

According to Broner, the press conference Wednesday for a fight of this magnitude should’ve been held somewhere bigger. It should’ve been open to the public, too, the way it went when Manny Pacquiao fought Floyd Mayweather Jr.

“I’m pissed off, for real,” Broner said. “Come in here and do this press conference in this little-ass room. When I went to Mayweather fight and Pacquiao and them fight, they was in that big-ass place and there was mass people around. And they just let the media in here, I guess. They ain’t spend no money on our sh*t, like our fight ain’t nothing. But, you know, I see what they’re trying to say. But they ain’t gonna do this sh*t no more, after I win.”

Broner’s rant seemed like an oblivious, unappreciative take from a fighter who drew with Jessie Vargas in his last bout, yet was rewarded by adviser Al Haymon with the biggest payday of his career and his first pay-per-view main event. Then again, why shouldn’t Broner feel figuratively bulletproof and demand whatever he wants?

The routinely crass Cincinnati native is one of boxing’s most fascinating figures, in that no matter what he does inside or outside the ring, it doesn’t seem to limit his opportunities, purses or television ratings.

Yet here he is, presented with yet another chance to realize the potential still oddly attached to his name 10 years into his pro career. Based on the strong ratings Broner’s bouts regularly produce for Showtime, the four-division champion’s place in his pay-per-view showdown with Pacquiao is warranted.

Those important numbers still beg this question: why do boxing fans continually tune in or purchase tickets to watch Broner box, when the results of his fights and his often-buffoonish behavior suggest those trends should end?

Showtime’s Stephen Espinoza believes Broner’s genuine nature, for better or worse, is what draws a significant segment of those viewers and customers to the polarizing Broner’s bouts.

“People who are Adrien Broner fans tend to say similar things about him,” Espinoza, Showtime’s president of sports and event programming, told BoxingScene.com. “And it all revolves around his authenticity. That, say what you want about Adrien Broner, he’s not trying to put on airs, he’s not trying to be anyone other than who he is, perhaps more than anything, to his detriment at times. But he’s not gonna say the right thing because that’s what’s expected of him. He’s not gonna always do the right thing because he feels compelled to do so. He is authentic to himself – good, bad or ugly. And he doesn’t try to be anyone he’s not.

“To some people, that’s a negative. And they would like a little bit more restraint in his actions and statements. But to a whole different part of the audience, they admire that authenticity, that realness and the ability to say, ‘Look, this is who I am. I’m not gonna try to be anyone that I’m not. I’m not gonna try to portray an image other than what I am. You can accept or reject me as I am. But I’m gonna go into this sport and go out of this sport on my own terms.’ ”

The 29-year-old contender’s lengthy arrest record in recent years might be more noteworthy than Broner’s boxing record during that same stretch. Those transgressions, in addition to his antics before, during and after fight nights, clearly make the train-wreck watchers gravitate toward him.

He also has displayed captivating vulnerability in openly discussing depression that seemingly made him suicidal more than once. Broner believes he appeals to fans in “the hood,” where many mired in circumstances comparable to those he overcame in Cincinnati – children and adults alike – view him as a symbol of hope.

“I’m me, man,” Broner told a group of reporters this week at MGM Grand. “I’m me. I’m me. It ain’t no duplicate. Well, there is – I’ve got a twin brother, but I’m me. No matter, I don’t care if the cameras are around or not, I’m gonna always be me. I’m just not afraid to say how I feel and express myself. I’m gonna be honest with y’all.” 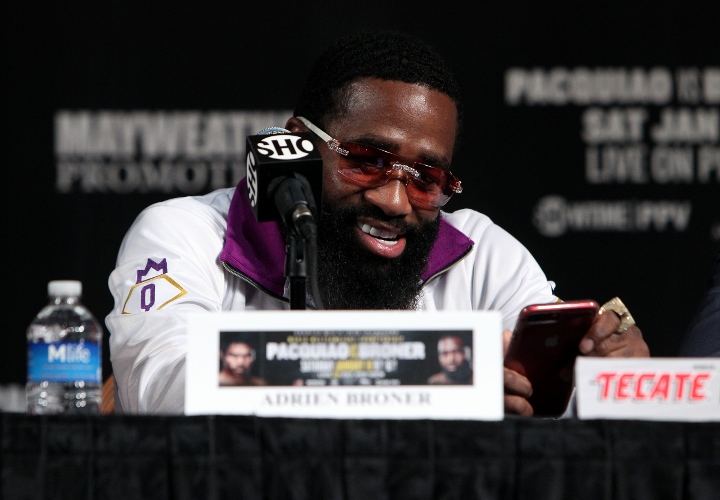 Several sources involved in this promotion believe Broner wasn’t exactly being honest when he directed expletives at unsuspecting Showtime announcer Al Bernstein during Wednesday’s press conference. Broner refused to answer Bernstein’s question, suggested that the respected analyst is biased against him and called Bernstein a “b*tch-ass n*gga.”

That, some skeptics suspect, was Broner’s calculated attempt to generate interest in a pay-per-view fight that faces challenges.

Its most obvious obstacle is that it will take place in January, not an optimal month to sell such an event. The undercard is stacked, but the main event features a 40-year-old legend who has lost seven times, been knocked unconscious and has produced one knockout since November 2009, as well as a willing villain who’s most remembered for his first defeat to Marcos Maidana five years ago.

Still, there are industry experts optimistically projecting that Pacquiao-Broner will produce 400,000-plus pay-per-view buys. That’s more than the roughly 325,000 buys Deontay Wilder and Tyson Fury produced for their heavyweight title fight December 1 at Staples Center in Los Angeles.

As if berating Bernstein weren’t enough Wednesday, Broner directed jokes about eating cats and dogs toward Filipino people who attended the press conference to support Pacquiao. In a previous press conference to promote this fight, Broner despicably made fun of Freddie Roach, Pacquiao’s trainer, for suffering from tremors caused by Parkinson’s disease.

Such statements also are what make Broner an anomaly even in this typically low-brow business.

“With Adrien, the curiosity is you never know what you’re gonna get out of him,” Showtime analyst Paulie Malignaggi told BoxingScene.com. “You can never predict him, and unpredictability is a very big key to marketing. When you never can figure out the answer to somebody – he’s ‘The Problem,’ and nobody has the answer. You never know what mood he’s in or if he’s being genuine or disingenuous. You never know if he’s joking or he’s serious. But the bottom line is he can fight. If you can’t fight and you’re a boxer, none of the other intangibles will matter. People tend to forget in all this that the kid can fight.”

Broner has won world titles in four weight classes, an achievement even in an era of at least four recognized world champions in each weight class. Nevertheless, other than his win against Malignaggi, which earned Broner the WBA world welterweight title for which he’ll fight again Saturday night, his list of championship conquests is underwhelming.

Broner beat Vicente Rodriguez by third-round knockout to capture the then-vacant WBO world super featherweight title in November 2011. A little less than a year later, Broner stopped Antonio DeMarco in the eighth round to take the WBC word lightweight title from him.

After moving up two divisions to edge Malignaggi by split decision for the WBA world welterweight crown, Broner eventually moved back down to 140 pounds. He added another vacant championship to his resume in that division when he stopped Khabib Allakhverdiev in the 12th round of their October 2015 bout.

Broner lost the WBA world super lightweight title he won against Allakhverdiev at the scale the day before his next fight – a ninth-round stoppage of Ashley Theophane.

Another loss, a draw and numerous arrests later, Broner (33-3-1, 24 KOs, 1 NC) still hasn’t lost the bulk of the fan base that has made him “must-see TV,” according to Mayweather Promotions CEO Leonard Ellerbe. Speculation persists that Broner could fight the retired Mayweather (50-0, 27 KOs), who mentored him earlier in his career, if he can upset Pacquiao at MGM Grand Garden Arena.

Pacquiao (60-7-2, 39 KOs) is listed as a 3-1 favorite, even though Broner is an imposing opponent when he lets his hands go, tough and considerably younger than him. If Pacquiao beats Broner and sets the stage for his rematch with Mayweather, Malignaggi figures fans still will keep Broner in their consciousness.

“In this sport, you win and you lose, and he has managed to keep himself relevant,” Malignaggi said. “He was given this platform and people know about this platform. And to this day, he’s unpredictable. You never know what he’s gonna say. You might go up to Adrien Broner and you can get any answer from, ‘Hi. How are you?,’ to something outlandish. So, the unpredictability raises curiosity. This is the social-media era. People are always curious.”

[QUOTE=alexguiness;19471805]I was waiting for you to bring up the racism thing... You didn't disappoint me.[/QUOTE] [IMG]https://media.giphy.com/media/l41m0vdJHMZyhiRDW/giphy.gif[/IMG]

[QUOTE=The D3vil;19471318]Better than Clint Eastwood's racist ass[/QUOTE] I was waiting for you to bring up the racism thing... You didn't disappoint me.

[QUOTE=alexguiness;19467826]I agree 100%, he is right up there with Mandela, Obama and MLK.[/QUOTE] Better than Clint Eastwood's racist ass