NEW YORK – Now that Shakur Stevenson’s fight against Miguel Marriaga has been postponed, when he’ll return isn’t the most pressing question the undefeated featherweight faces.

First and foremost, Stevenson must decide who, and at which weight, he wants to fight next. Marriaga was an optional opponent, a puncher, but also a big underdog who was supposed to help Stevenson stay busy before a 126-pound title unification fight against England’s Josh Warrington.

Their entire card, which was scheduled for Saturday night at Madison Square Garden’s Hulu Theater, was postponed Thursday night due to the coronavirus pandemic that also has caused the NBA, NHL and Major League Baseball to temporarily stop its seasons.

Stevenson isn’t obligated to reschedule his fight against Marriaga. Nevertheless, facing Marriaga later this year is one of three obvious options from which the 2016 Olympic silver medalist could choose once coronavirus concerns are alleviated and the boxing business returns to normal.

The pros and cons of those three possibilities are examined below.

GOING STRAIGHT TO FIGHT WITH WARRINGTON

This is the biggest featherweight fight that’s actually available for the left-handed Stevenson, who won the then-vacant WBO 126-pound crown by thoroughly out-boxing Joet Gonzalez on October 26 in Reno, Nevada.

Warrington apparently was awaiting the outcome of the Stevenson-Marriaga match before determining his next move. The unbeaten IBF featherweight champion parted ways with former promoter Frank Warren last month to re-sign with Eddie Hearn’s Matchroom Boxing, but both Warrington and Hearn have indicated that won’t prevent a showdown with Stevenson from occurring.

Stevenson wants Warrington bad enough that the 22-year-old champion is more than willing to travel to Warrington’s hometown of Leeds, England, to fight him. Fighting Warrington there is risky, particularly when you consider Warrington won split decisions over Lee Selby and Kid Galahad in Leeds in two of his past four fights.

Still, getting the numbers right on his contract, not on the scorecards, seems to be the obstacle that could prevent Stevenson from signing to challenge Warrington in Leeds.

Stevenson alluded to him and Top Rank’s disagreement regarding what that fight is worth for him during a press conference Thursday at Madison Square Garden.

“The only thing that’ll keep me at 126 is if they got the money right,” Stevenson said in reference to fighting Warrington. “But if the money not right, then I’m going right to 130.”

Bob Arum, Stevenson’s promoter, told BoxingScene.com on Wednesday that Stevenson has been made what Arum considers a fair seven-figure offer to fight Warrington.

“He can get the [Warrington] fight,” Arum said. “It’s up to him if he wants it. I know Warrington wants it. Look, that fight can happen. And we’ve offered Shakur, along with [Matchroom Boxing], a very good purse. If it’s not enough, he won’t do the fight. But it’s more than he’s getting Saturday night. So, I assume he’ll accept it. But all he has to do is say, ‘OK, I’m in,’ and the deal is done.” 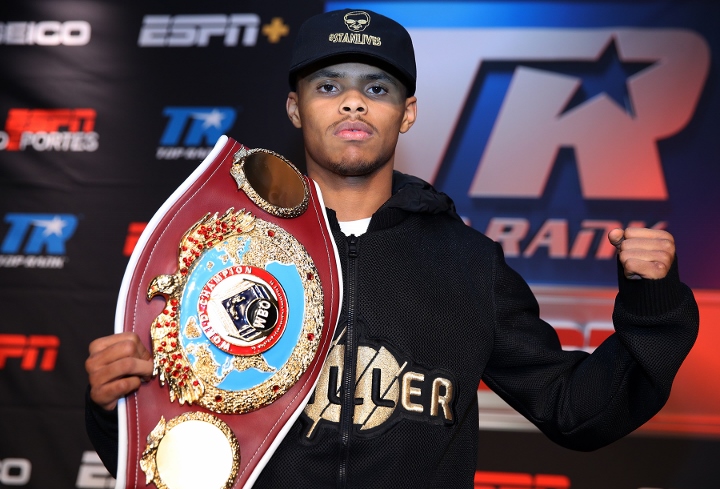 MOVING UP TO THE 130-POUND DIVISION

Stevenson has emphasized that it is becoming more and more difficult to get down to the featherweight limit of 126 pounds.

The 5-feet-7 Stevenson senses he already is better suited for the 130-pound division, even though he wants a fight with Warrington before he moves up.

Advancing four pounds would make matters easier physically in training camps for Stevenson. The Newark, New Jersey, native would have less leverage as a challenger than as a champion, though, and boxing’s 130-pound champions all are tied up with other fights later this year.

Mexico’s Miguel Berchelt, the WBC super featherweight champion, is committed to fighting former WBO featherweight champ Oscar Valdez, who vacated his title and moved up when Stevenson was his mandatory challenger. The date and site for Berchelt-Valdez haven’t been finalized.

Leo Santa Cruz, the WBA’s true champion at 130 pounds, apparently will move up to the lightweight division to challenge Gervonta Davis for Davis’ version of the WBA 135-pound championship sometime this summer.

Newly crowned IBF junior lightweight champ Joseph Diaz Jr. is contractually required to give former champ Tevin Farmer an immediate rematch. Their second fight has not yet been scheduled.

Jamel Herring, the WBO junior lightweight champ, is headed for a title defense against Carl Frampton. Their fight could take place as soon as June 13 in Belfast.

Herring also is trained by Brian McIntyre, who trains Terence Crawford, the WBO welterweight champion who mentors Stevenson. The nature of their relationship makes it unlikely Stevenson would challenge Herring even if Herring were available to defend his title versus Stevenson next.

Marriaga would be willing to reschedule this fight for whenever and wherever Stevenson sees fit.

It’s an appealing financial option for Stevenson, too, as he was supposed to make just over seven figures for what would’ve been the first defense of the WBO title he won four months ago. This seems like the least likely of these three options that Stevenson will choose, though, because Warrington wants to fight at Emerald Headingley Stadium, a cricket and rugby complex in Leeds, by June or July.

The 29-year-old Warrington won’t wait for a rescheduled Stevenson-Marriaga match to take place before arranging his next fight. Warrington also has a mandatory title defense due against Galahad, who lost a split decision to Warrington on June 15 in Leeds.

If Warrington were to box Galahad again before securing a fight against Stevenson, he’d risk a bigger payday by facing an opponent he barely beat nine months ago.

Stevenson (13-0, 7 KOs) was heavily favored to overcome Colombia’s Marriaga (29-3, 25 KOs), but he acknowledged Thursday that the three-time world championship challenger is dangerous.

“Saturday night, I got a hard test in front of me,” Stevenson said, referring to Marriaga. “It’s not like I got an easy fight in front of me. So, I ain’t even looking [at Warrington] right now. I’m looking at Marriaga.”