Adam Kownacki came in only slightly lighter Friday than he weighed for his previous fight.

The 6-feet-3 Kownacki weighed 265¼ pounds when he stepped on the New York State Athletic Commission’s scale for his 12-round bout against Robert Helenius on Saturday night at Barclays Center in Brooklyn. Kownacki weighed a career-high 266 pounds the day before he encountered Chris Arreola on August 3 at Barlcays Center.

The 30-year-old Kownacki told BoxingScene.com before their weigh-in Friday at The Tillary Hotel in Brooklyn that he felt too heavy when he went up against the 6-feet-3, 244-pound Arreola (38-6-1, 33 KOs, 1 NC). 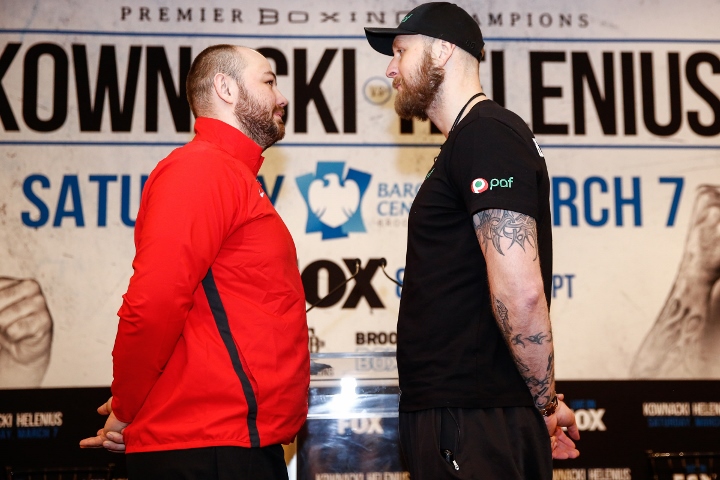 Kownacki (20-0, 15 KOs) won that fan-friendly, 12-round battle by unanimous decision. The popular Polish fighter threw 1,047 punches in that bout, but the Brooklyn-bred heavyweight contender thinks he made it harder than necessary by not being in better condition.

Finland’s Helenius weighed in at 238½ pounds Friday. The 6-feet-6 Helenius was nearly five pounds lighter than for his last meaningful fight, an eighth-round, technical knockout loss to Gerald Washington (20-4-1, 13 KOs) on July 13 in Minneapolis.

Kownacki, who’s a 25-1 favorite over the 36-year-old Helenius, stopped Washington in the second round of their January 2019 bout at Barclays Center.

FOX will televise Kownacki-Helenius as the main event of a three-fight telecast that’ll start at 8 p.m. ET/5 p.m. PT.

Earlier Friday, unbeaten Nigerian prospect Efe Ajagba officially weighed 242½ pounds for his 10-round heavyweight fight against Romania’s Razvan Cojanu, who weighed in at 255½ pounds. FOX will show the Ajagba-Cojanu contest immediately prior to Kownacki-Helenius.

Most Internet sports books have made Sanchez a 10-1 favorite. Sanchez-Dawejko will open FOX’s broadcast.

Well, what can I say. I am very disappointed, but it is my fault that I was thinking with my heart and not with my brain. I thought Kownacki's chin can equal his lacks in defense, but I was wrong.

[QUOTE=freelaw;20447132]Helenius Obliterated Sam Peter with hellish shots. That was a long time ago but I wouldn't rule an upset out so easily.[/QUOTE] I seriously suspected an upset. Went to sleep thinking that if I was to bet I would bet…

[QUOTE=Dariusz;20448155]Generally I agree to you, but as far as the very Kownacki said, he had to drop a few pounds to go to his Arreola fight and he was very dehydrated that time. I would love to see the fight…

[QUOTE=Damn Wicked;20447935]All of 3/4 of a pound more for the Areolla fight. Kownacki said he felt too heavy in that fight and was planning on coming in lighter for future fights. He must have stellar discipline, because he lost a…

[QUOTE=4truth;20446934]If I were in Vegas, I'd be dropping $20 on Helenius. Stranger things have happened and Helenius has been ailing and in poor shape for a few years now.[/QUOTE] Also do you mean to say Kownacki has been ailing and…