Think of a good “little heavyweight” and who comes to mind? For some it might be Ray Mercer. Others might say Mike Tyson, Evander Holyfield or Joe Frazier. Maybe we could go back into the distant past and claim Jack Dempsey. Rocky Marciano, Gene Tunney or Floyd Patterson. How about ‘Big’ George Foreman? Lennox Lewis? Well what about Wladimir Klitschko? The term small heavyweight, it seems, takes in a lot.

Welcome to the wacky world of modern boxing and the WBC’s intention to deliver us a new weight class between cruiserweight and heavyweight. The problem, the WBC say, is that modern heavyweights are too big, pointing to Tyson Fury and Anthony Joshua. They are pitching this division at 224 pounds – or 16 stone to use the measurement by which the original weights were classified. They also intend to drop the cruiserweight limit from 200 pounds to 190 in the kind of unilateral move that will kill all hopes of unification fights for the near future in one of the few divisions that has regularly delivered them.

In the long history of boxing, when a perceived problem appears, the correct answer has almost never been “add a belt”. But look behind the reasoning and essentially that is what the WBC are doing here. In a crowded boxing market place, are fans crying out for a “super-cruiserweight” or “sub-heavyweight” division? No. At its heart, this is only muddying the water. 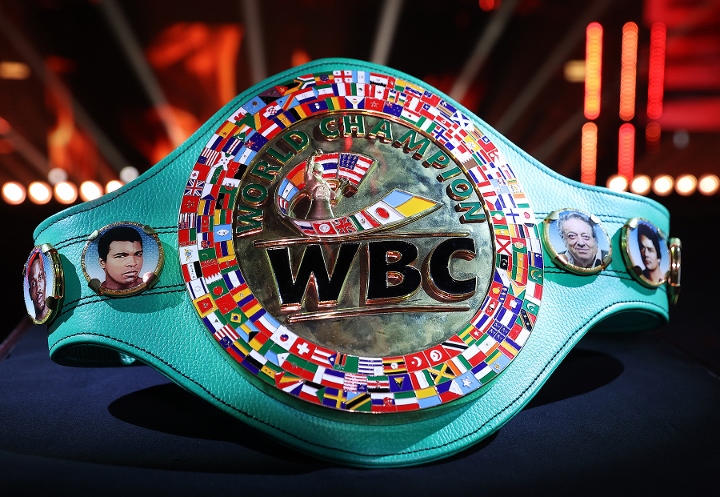 One of the problems is where this division is being pitched. A division at 16 stone excludes all but a handful of holders of what was once called the richest prize in sport. Foreman, Lewis and the younger Klitschko – all 6ft 6in of him – all weighed below 224 pounds at some point in their careers. Considering how some people cling to the idea of the lineal title, this less makes Fury the successor to Marciano and Ali and more the follower of Primo Carnera and Jess Willard (and even the man known at the Pottawatomie Giant scaled below 224 at some point). With weigh-ins taking place more than 24 hours before the boxer steps in the ring, how long will it be before a boxer weighing 240 pounds in the ring will not be classed as a heavyweight?

Meanwhile, the present cruiserweights would face an instant choice between having to boil down 10 pounds and remain a cruiserweight, or put on 24 pounds to box in the new division.

What it would also do is decimate a heavyweight division that has been short on depth for a long time. Looking at the WBC rankings, a new super-cruiserweight top five could be Oleksandr Usyk, Deontay Wilder, Oscar Rivas, Michael Hunter and Frank Sanchez.

I read an opinion the other day saying that a Deontay Wilder-Usyk fight would be the perfect start to this division. That seems hopelessly naïve, though. It wouldn’t happen for exactly the same reason as we haven’t seen a Terence Crawford-Errol Spence fight, or why Wilder and Anthony Joshua never got it together.

And who would really want the belt? It will only ever be seen as a gateway belt to a shot at the real heavyweight title, much in the way international, inter-continental, silver, regular and all the other titles were supposed to be before it was realised they could become a whole new industry all of their own.

If you want to make good fights, the last thing you need is more belts. What more belts creates is more options not to fight. Even if both Wilder and Usyk wanted to box in the new division, why fight each other for a belt when they can box someone easier for a belt and then build up talk of a unification. The idea if people wanting to have the hardest fight possible to become a world champion is fanciful, especially once promoters and managers get involved.  Because once the WBC announce a new division, history tells us the others will swiftly follow.

The IBF got plenty of traction in its early days, by recognising Marvin Hagler and Larry Holmes as champions and insisting their fights would remain over 15 rounds, when the WBC switched to 12. Go back to 1984 and that was a big issue, with some people appalled that title fights could be recognised over the shorter distance. Within a few years, 15-round fights were a thing of the past, but the IBF were here to stay, soon to be joined by the WBO.

Boxing thrives when fights happen that people want to see. Size is an issue with some heavyweights, notably Fury. But considering, the WBC heavyweight champion threatens to retire on a regular basis, it may be premature to redraw boxing on his behalf.

[QUOTE=joe strong;20849116]Matchroom has put on some good fights but if you look at that list it's 8 guys. The best card in the last while for HWs was Ruiz/Joshua 2. Whyte/Wach, Povetkin/Hunter, Hrgovic/Molina. I want more cards like that. Personally…

[QUOTE=joe strong;20848539]Maybe i’m a little hard on the division but a lot of the top guys are in their late 30s. The younger guys are not fighting each other too often. I wish all tge names you listed simply fought…

[QUOTE=4truth;20847373]I have yet to read this anywhere, [I]which doesn't mean much to be honest[/I] BUT as far a I know there are still no minimum weights in any division and this rule would not impose any. Has this changed and…