The stakes have been raised for Dillian Whyte’s next fight along with the reassurance at a long-desired title shot should he emerge victorious.

Unfortunately, it will also result in yet another delay in an already lengthy wait for his first shot at the heavyweight crown.

A ruling was made during the 58th annual World Boxing Council (WBC) Convention which ensures Whyte’s place in line as the mandatory challenger to the title. However, the promise made at the convention one year ago is no longer in place. Instead, he will have to wait for the fight to be ordered shortly after the third clash between WBC and lineal heavyweight champion Tyson Fury and former titlist Deontay Wilder,

“The mandatory defense will be ordered the day after the Wilder-Fury fight,” Mauricio Sulaiman, president of the WBC confirmed during the convention, though with a twist. “Of course, it’s impossible if the fight happens December 19 for the fight to take place in February 2021.” 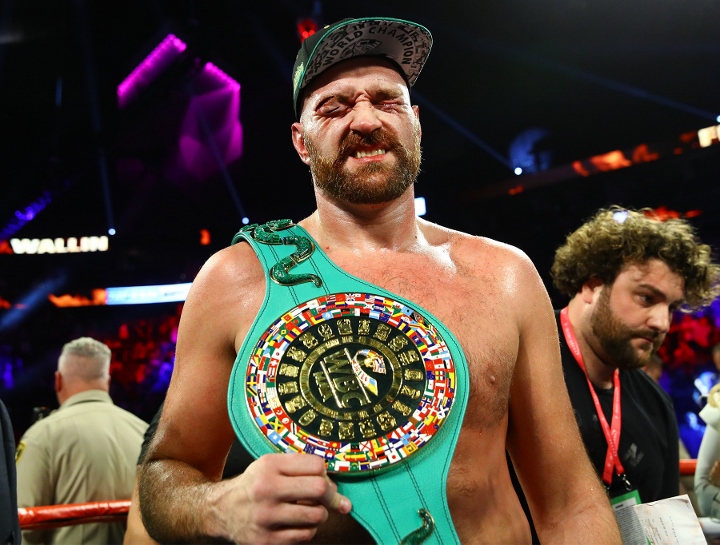 Whyte has held the number one position with the WBC since August 2017, though only confirmed as the WBC mandatory after his 12-round win over then-unbeaten Oscar Rivas last August in London, England. A prior ruling was made for the heavyweight contender from Brixton, England to wait out the series between Fury (30-0-1, 22KOs) and Wilder (42-1-1, 41KOs) to play out, with the winner to honor their mandatory obligations straightaway.

That was before the ongoing coronavirus pandemic, which has twice delayed plans for part three in that heavyweight title fight set.

Fury won the WBC belt—along with reclaiming lineal championship status—following a 7th round stoppage of Alabama’s Wilder this past February in Las Vegas. Wilder exercised a contractually-guaranteed clause granting the loser an immediate third fight, which was previously due to take place July 18. The ongoing global health crisis pushed back those plans to October 3 and now tentatively due to take place December 19, with the hopes of occurring with at least some fans in attendance by that point.

Given what is now a five-month delay in such plans, there arose concerns of honoring the existing agreement. Such a point was raised by Francis Warren of Queensberry Promotions—the co-promoter for England’s Fury along with Top Rank—of a two-month turnaround serving as an unrealistic expectation for the winner.

Those fears were alleviated by the sanctioning body.

“The date stated in February is not the set date,” Sulaiman confirmed, noting the pandemic as the reason for what is now a fluid situation. “The winner of Wilder-Fury is committed to fight Whyte if he is victorious on August 22. A letter will go out one day after their fight—which we were told will be in December—for negotiations to begin.”

Meanwhile, Whyte still has to get through his next assignment. The top-ranked heavyweight contender and WBC interim titlist will next face Russia’s Alexander Povetkin atop an August 22 Sky Sports Box Office event in Brentwood, Essex, England. The WBC has sweetened the pot.

“The WBC Diamond belt is going to be awarded to the winner,” Sulaiman confirmed. “This is the best fight since the pandemic. Dillian Whyte is the interim champion and mandatory contender. If he is victorious, he is going to fight the winner of Tyson Fury-Deontay Wilder which is scheduled for December.”

[QUOTE=Bunch Pag;20713296]I'd love to see Fury fight Whyte.. Right after a unified fight between whoever... For me a unification is all I want to see in the HW division, whether it's Fury/AJ/Wilder/Pulev The HW division has bummed about too much,…

[QUOTE=Tyistall;20704386]Here's a simple question to all Fury fans. Why would you not want to see Fury vs Whyte? It's a good fight, belt or no belt. Is it because you are afraid that your idol will lose? Is it because…

[QUOTE=Fighter78;20713198]Here you go dummy....trying to project YOUR characteristics upon me...lol..that thing you lepers do won't work on me little buddy...LOL[/QUOTE] I'm not the one defending a proven loser, I am supporting Fury an undefeated, highly accomplished Champ, no active HW…

[QUOTE=Fighter78;20713139]I wouldn't waste any more time talking to a proven moron like jonnyC who likes weak fighters like fury[/QUOTE] Nope you just have no argument, run like a coward.