Ward: What More Does Crawford Have to Do to Be P4P Number 1?

Ward considers Crawford the best boxer, pound-for-pound, in the sport. That distinction belonged to Ward when the former light heavyweight champion announced his retirement in September with an unblemished record (32-0, 16 KOs). 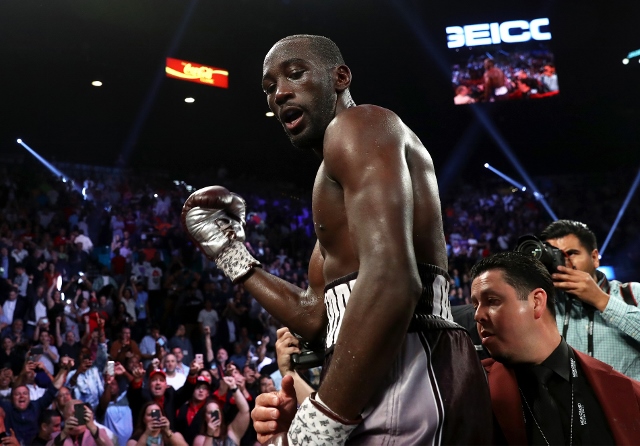 The 30-year-old Crawford (33-0, 24 KOs) became a world champion in a third weight class when he stopped Australia’s Jeff Horn (18-1-1, 12 KOs) in the ninth round Saturday night at MGM Grand Garden Arena. Crawford, of Omaha, Nebraska, previously held the WBO lightweight championship and was boxing’s undisputed 140-pound champion prior to moving up to welterweight.

“I would probably have to say yes,” Ward, who worked the Crawford-Horn fight for ESPN+, responded to a small group of reporters when asked if Crawford is boxing’s pound-for-pound king. “I think the pound-for-pound fighter should not be the most popular. He should be the guy that fought the best competition and has beaten the best competition over an extended period of time. He’s a three-division world champion and, if I’m not mistaken, if I read it properly, he’s done it with the least amount of fights. And I think it’s like six or seven guys that are in that category. I think he’s done it in the least amount of fights.

“I mean, what more does he have to do? And he’s not running from the smoke. He’s not running from challenges. He’s asking for it. He just does it in a different kind of way. He’s not boisterous. You know, he could turn up, but he’s more or less like, ‘Man, whatever. I’m ready.’ What do you think about this guy? ‘Bring it on.’ It’s simple and plain.”

BoxingScene.com ranked Crawford at No. 1 on its most recent pound-for-pound list.

ESPN.com most recently ranked Crawford third on its list, behind the top-rated Lomachenko and the second-ranked Golovkin. The Ring magazine also rates Crawford at No. 3, but ranks Golovkin first and Lomachenko second.

[QUOTE=Progrssive_Jedi;18856418]Garcia’s can compete at 147. He has legit size over Loma. If Loma and Garcia are seen as competitive fights it goes to show just how good Loma is. And stop pretending his loss wasn’t in his second fight fighting…

[QUOTE=Raggamuffin;18857241]You can call it what you want but Bud is going to whoop Spence’s ass. So triangle that. Spence is fighting another ****en no hoper and I hope he whoops Spence’s ass ole overrated ass lmao.[/QUOTE] You seem really confident.

Ward should do his homeworks. He is an horrible commentator, sounds like he barely follows boxing. He is biased towrds non us fighters. Malignaggi was a worst fighters but is a better analyste.