Ward: Alvarez KO Humbled Kovalev, Made Him Listen To McGirt

As an analyst for ESPN’s coverage, Ward watched from a ringside seat as Kovalev clearly out-boxed Eleider Alvarez in their 12-round rematch at Ford Center at The Star. Ward walked away from their fight convinced Kovalev’s knockout loss to Alvarez nearly six months earlier taught the three-time light heavyweight champion humility.

That invaluable lesson enabled Kovalev to finally listen to his trainer, this time Buddy McGirt. The former junior welterweight and welterweight champion trained Kovalev for the first time for this immediate rematch.

“I thought Kovalev looked very good, very composed,” Ward told BoxingScene.com. “Alvarez didn’t press him enough to really tell if his conditioning was better. But at least his composure was better. [Kovalev] didn’t show too much pressure tonight, which was a good thing. Buddy McGirt convinced an older fighter to box, to work smarter in training camp, and not harder, and ultimately work smarter in the fight and not harder, and it paid dividends tonight.” 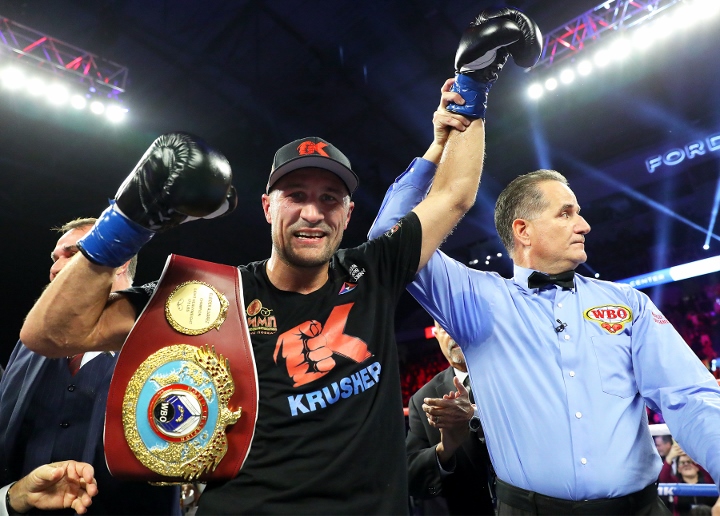 In their first meeting, Kovalev faded during the second half of a fight he largely controlled over the first six rounds. Ward won a unanimous decision in that 12-rounder in November 2017 at T-Mobile Arena in Las Vegas.

The undefeated Ward stopped Kovalev in the eighth round of their immediate rematch in June 2017 at Mandalay Bay Events Center in Las Vegas.

Ward’s right hand hurt Kovalev in the seventh round and Kovalev looked like he was starting to fade. The controversial conclusion incited heated debates because referee Tony Weeks stopped their scheduled 12-round fight once Ward landed multiple questionable blows to Kovalev’s body in succession.

Kovalev feels he defeated Ward in their first fight. He also believes he was wronged by Weeks in their rematch.

The way Ward sees it, his rival was “out of excuses” once Alvarez upset him by seventh-round knockout August 4 at Hard Rock Hotel & Casino in Atlantic City.

“Tragedy and setbacks and, in this case, devastating knockouts, will humble you,” said Ward, who retired in September 2017. ‘I think it forced him to listen to the next coach, which is Buddy McGirt. I think the other two coaches he had, with the little bit of knowledge I know, they were fine. But he didn’t listen. He was still ‘The Krusher’ at that time. He was no longer ‘The Krusher’ when he brought Buddy in, so he had to listen.”

McGirt and Teddy Cruz, Kovalev’s strength and conditioning coach, kept Kovalev from over-training for his second fight against Alvarez. The Russian knockout artist made that mistake before their first fight and numerous other times in his career.

Cruz and McGirt made sure he didn’t exhaust himself by putting in extra work following training sessions and made sure he ate the proper foods. Kovalev weighed in one pound below the light heavyweight limit of 175, yet still ate in breakfast and lunch before weighing in late Friday afternoon.

[QUOTE=HURTFEELINGS;19490115]If you didnt get the gist of what I was saying....please dont speak of intelligence again.:spank:[/QUOTE] Nobody understands you! That's the issue. :lurk: Crawl back into your ignorant hole.

[QUOTE=Songbird;19490165]They tied up kovalev did they? Well, i wouldnt be surprised, weeks may actually [B]allow ward to do that[/B]![/QUOTE] refs do this not just this one:spank:

[QUOTE=HURTFEELINGS;19490136]Actually they studied kov and noticed he doesnt have ko's at a certain range, and tied him up at the dangerous ranges he had. And he got whooped and mentally/physically quit. Its what they said they did, didnt let him…

[QUOTE=Songbird;19489982]I would say that kovalev was in his normal shape for both ward fights, as in prone to gasing if a certain amount of pressure is put on him physically, like ward grabbing and wrestling him, tiring him out and…

[QUOTE=Boxing Goat;19489816]Wrong website. This one is for boxing. Two very different things and also, Russians can't be American presidents.... But, you knew that didn't you? You just wanted to stir the pot because you're not [COLOR="Red"]intelligent[/COLOR] enough to separate the…