Wallin: Schwarz Kind Of Gave Up In Second Round Against Fury

The undefeated Swedish southpaw promises to be a much more difficult foe for Tyson Fury than Schwarz was in Fury’s last bout. Wallin (20-0, 13 KOs, 1 NC) is set to face Fury (28-0-1, 20 KOs) in a 12-rounder ESPN+ will stream September 14 from T-Mobile Arena in Las Vegas.

Wallin was perplexed while watching Tyson Fury’s second-round technical knockout of Schwarz on June 15 in Las Vegas. Wallin wondered about Schwarz’s game plan and feels the previously unbeaten German heavyweight could’ve given a better effort in what was the biggest fight of Schwarz’s career. 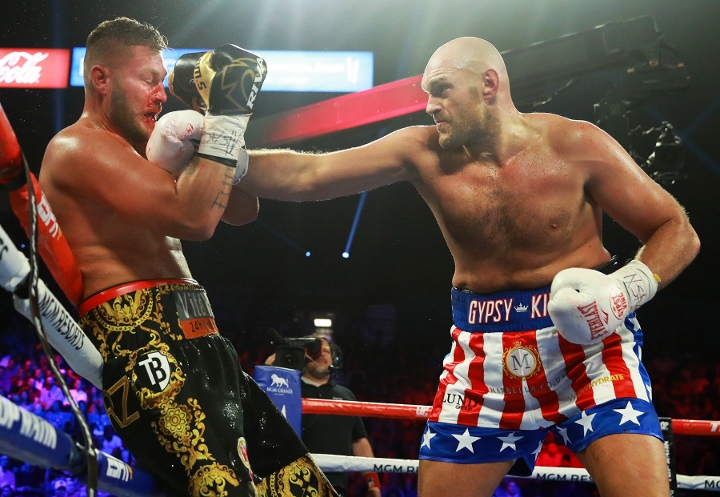 The 6-feet-5, 235-pound Schwarz fired several hard right hands at Fury during the first round of their fight at MGM Grand Garden Arena. Fury opened the second round fighting out of a southpaw stance, and quickly picked apart Schwarz.

The 6-feet-9, 263-pound Fury caught Schwarz with two eye-catching left uppercuts and later a right hand that dropped Schwarz late in the second round. Schwarz got up, but Fury pounced on him and unloaded a barrage of unanswered power punches that forced referee Kenny Bayless to stop their scheduled 12-rounder less than two rounds into it.

The 30-year-old Fury went off as a 12-1 favorite over Schwarz (24-1, 16 KOs). He has opened as an even bigger favorite versus the untested, unknown Wallin (25-1), but the confident Wallin is certain he will fare much better against the lineal heavyweight champion.

“I think what separates me from the others is that I have good speed and I have good footwork, and I’m a young, hungry guy,” said Wallin, who’s 28. “And I have everything to gain and nothing to lose. So, he’s gonna know that he’s in with someone that wants to win.”

Nevertheless, the 6-feet-5, 230-pound Wallin understands the backlash Fury and co-promoters Bob Arum and Frank Warren have received since he was confirmed as Fury’s upcoming opponent.

“[Fans] don’t know me, so I was expecting that, with them being negative about it,” Wallin said. “But I get a lot of support. A lot of people that know me, they get a hold of me and say I can do this. I’m very happy for that. I love the support, and the other guys, I don’t care so much about.”

Wallin won't make much of a bout from this neither

Schwarz gave up before the first bell.

I guess not much skill is required in matchmaking as there seems to be an endless supply of eurobums for Fury to fight. WAR Eurobum!!

[QUOTE]''Otto Wallin won't go out like Tom Schwarz''[/QUOTE] We aint going out like dat! by Cypress Hill should be Otto Wallin's entrance song! Yeeeeaaaaah! Tyson Fury Gypsy-Bum, When the shiz goes down you better be ready! WAR OTTO WALLIN!!!