Wallin: Fury Stole Some Rounds, But A Fair Decision

LAS VEGAS – Otto Wallin handled himself as commendably after his loss to Tyson Fury as he did during their fight.

Though at least two of the judges’ scores seemed wider than Wallin deserved, the disappointed Swede didn’t complain. Wallin instead praised Fury for using his experience and intelligence in the ring to sway how the judges scored some of the close rounds in their 12-round heavyweight fight Saturday night at T-Mobile Arena.

“I think he used his experience to steal some rounds,” Wallin said during the post-fight press conference. “I know there were some close rounds and usually they give that to the champion. And I wish I could’ve stayed on it a little more to steal those rounds, like he did. But, you know, it was a fair decision.” 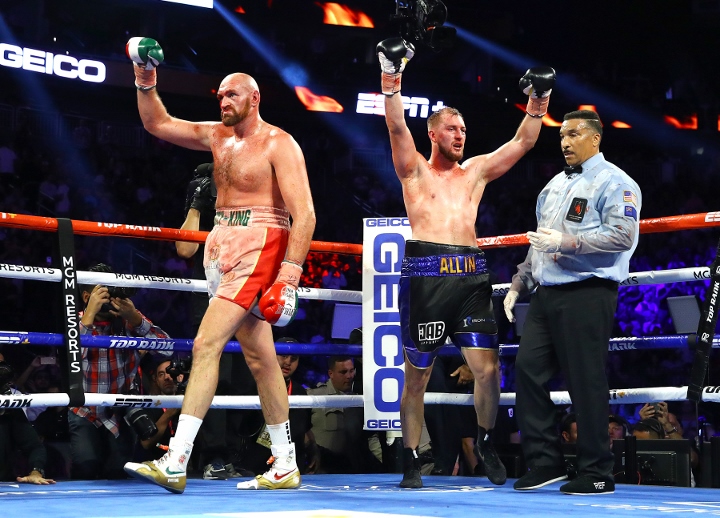 The 31-year-old Fury fought through a gory gash over his right eye for nine-plus rounds and grinded out a unanimous-decision victory over the previously unbeaten Wallin (20-1, 13 KOs, 1 NC).

CompuBox’s unofficial punch stats indicated their fight was closer than that.

England’s Fury (29-0-1, 20 KOs) took control in the championship rounds, until Wallin nailed him with a straight left hand that hurt Fury 38 seconds into the 12th round. Fury craftily moved and held his way to the final bell and secured his place in a contracted rematch with WBC champion Deontay Wilder (41-0-1, 40 KOs).

Wilder will have to win what would be the first of back-to-back rematches November 23 to solidify the Fury fight. The 33-year-old Wilder, of Tuscaloosa, Alabama, will face Cuban southpaw Luis Ortiz (31-1, 26 KOs, 2 NC) that night at MGM Grand Garden Arena.

Wallin, meanwhile, knows this performance has established him as a legitimate heavyweight contender. He gave credit to Fury, however, for what even he considers a convincing victory.

“I did everything I could,” Wallin said. “I left it all in the ring and, unfortunately, it wasn’t enough. And Tyson is a great champion, and he deserved the win.”

[QUOTE=1hourRun;20061498]I had it a draw. Otto Wallin stole the show, the fans cheered the Germans name by the end of the night.[/QUOTE] interesting. Which part of Germany Otto is from?

Do you seriously think Wilder can box??? 😆 😆 😆 Wilder has no boxing skills at all! He banks on you making a mistake so he can land a big punch. He got lucky landing those punches on Tyson Fury.…

I felt like Wallin won 3-4 rounds. He was game and he landed one punch that busted Fury up pretty nice and a few more that buzzed the Gypsy King. Wallin is getting credit because he was game and he…