Virgil Hunter: Khan Was Beating Canelo Until He Got Caught

Hunter has been training Khan for the most part since 2012, when the boxer parted ways with Hall of Fame coach Freddie Roach. 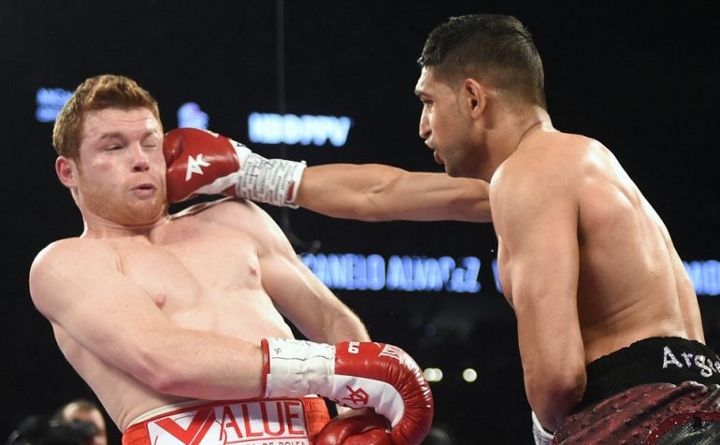 Khan is back under Hunter's guidance, as they prepare to face on of the top pound-for-pound fighters in the sport.

"Amir is insanely talented," says Hunter to Daily Mail. "But I think he had too much too soon. He used to come to the gym surrounded by friends and distractions. Now he comes just with his gear.

"If you carry your own bag in this game, you are your own person. He’s found himself now and we’re going into the Garden to win; to surprise one of the top two pound-for-pound fighters in the world today.

"Amir had people in his ear telling him how great he was. He had some great wins and performances. He thought he’d arrived but once you do that, there’s a danger you stop working to reach the very top. The illusion of the moment can stop you looking ahead, which is the whole key in this sport. He didn’t realise he hadn’t yet fulfilled himself."

Back in 2016, Hunter advised Khan to walk away from a lucrative fight with Saul "Canelo" Alvarez.

Khan had to move up to a catch-weight of 155-pounds to face Canelo, who at the time was the WBC middleweight champion.

He did well in the early rounds, until Canelo landed a massive right hand that knocked Khan out cold in the sixth round.

"It broke my heart to see him lying there. It was a major setback that wasn’t necessary. He was on a roll and could have won big fights and won more titles at light-welter and welterweight. He tells me now that he didn’t really want to fight Canelo but he has his pride and didn’t want people thinking he was scared," Hunter said.

"Even then he was boxing brilliantly and winning the fight, until he got caught with that huge (Canelo) right hand."

[QUOTE=tonysoprano;19670574]Nobody made him take the fight. You can't give him credit for being chinny then agreeing to a huge payday against a very heavy handed fighter 2 weights above him. He cashed out, took a fight he had zero chance…

[QUOTE=lopetego;19669914]Bull**** Canelo only had problems during the first 2 rounds, because of Khan's speed by the third round Canelo started to adapt to Khan's speed and to time him, and those body blows started to land, swift and hard by…

[QUOTE=Mindgames;19669871]It is when youre practically two divisions below the superstar you're fighting. He was fighting a man who was knocking out 154lbders with one punch, while himself having a fragile chin even at lightweight against journeymen. He stayed in there…

Bull**** Canelo only had problems during the first 2 rounds, because of Khan's speed by the third round Canelo started to adapt to Khan's speed and to time him, and those body blows started to land, swift and hard by…

Has there ever been a fight where Khan was losing before he got ko'd? None that im aware of. But he gets ko'd neither the less lol.