Villa: Navarrete Is A Good Fight For Us, A Good Style Matchup

The opponent in mind has changed, but the goal remains the same for Ruben Villa as was the case at the start of the year.

Weeks of patiently wading through the ugly side of the sport’s politics paid off for the unbeaten featherweight contender, who will now challenge for his first world title. Villa initially figured for such an opportunity to come versus two-time Olympian and 2012 Olympic Bronze medalist Michael Conlan.

“When the year began, Conlan was ranked ahead of us. So, of course he was a target of ours,” Villa told BoxingScene.com. “He had that great amateur career and is unbeaten as a pro. We figured if we didn’t fight him in a (vacant) title fight, it would be a title eliminator.

“That was before COVID hit, though. That was the plan before we all had to readjust. I’m grateful that it all worked out the way it did.” 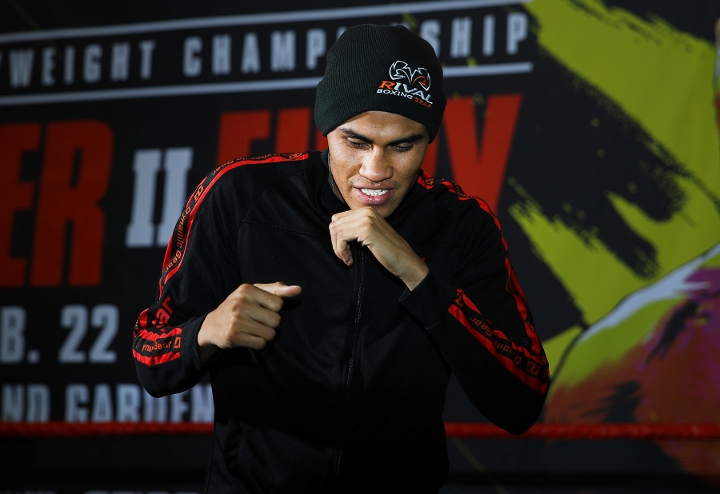 The 23-year old southpaw from Salinas, California was forced to take the scenic route, as he watched Conlan drop down to the junior featherweight division, where Mexico’s Navarrete left behind one title in pursuit of another one division north. Villa had to wait out sanctioning body shenanigans, as former 122-pound titlist Jessie Magdaleno (28-1, 18KOs) was advanced in the rankings and ordered to face Navarrete. When those plans fell through, Villa re-entered the mix and didn’t hesitate to accept the title fight opportunity.

“Whether it was Conlan or Navarrete, either guy would be a great win for me and set up big things in my career,” notes Villa, who is coming off of a 10-round win over Alexei Collado this past January. “Navarrete is a good fight for us, a good style matchup. He’s a come-forward guy and I’m a boxer who can frustrate him.

“I’m just grateful the path remained the same even if it’s a different opponent than the one we thought we’d fight. We sensed a fight like this was coming. After I beat Alexei Collado, before COVID and all that, I took a week off and was right back in the gym. I never do that; I usually take a month off. But I was hungry and wanted to fight as soon as possible. Now that it’s Navarrete, I’m even more hungry to win that world title.”

[QUOTE=Bigdog77;20796981]The only one smoking something here is you if you think Villa is going to lose.. Navarrete moves slow as **** like he’s underwater.. he ain’t laying a glove on villa.. what’s going to happen when someone who beat Shakur…

Navarette is going to get outboxed

Villa is a solid contender but I don't think he's quite ready for Navarrete (on paper). Stranger things have happened and as invested as they are in Villa's career, I doubt they'd throw him in with Navarrete thinking he'd get…

The only one smoking something here is you if you think Villa is going to lose.. Navarrete moves slow as **** like he’s underwater.. he ain’t laying a glove on villa.. what’s going to happen when someone who beat Shakur…