World middleweight champion Gennady "GGG" Golovkin tipped the scales right on the limit at 160 pounds on Friday as he chases a record-equalling title defense against Vanes Martirosyan in Los Angeles. Photos by Tom Hogan/Hoganphotos.

The unbeaten Kazakh star can equal Bernard Hopkins' record of 20 successful defenses of the middleweight crown on Saturday when he faces the Los Angeles-based Martirosyan at the StubHub Center.

Martirosyan emerged as a last-minute opponent for Golovkin after Mexico's Saul "Canelo" Alvarez withdrew from their scheduled May 5 rematch in Las Vegas after failing a drugs test.

Martirosyan, who normally fights at light middleweight, will be stepping up a division to face the hard-hitting Golovkin, who is unbeaten through 38 fights, including 33 by knockout. 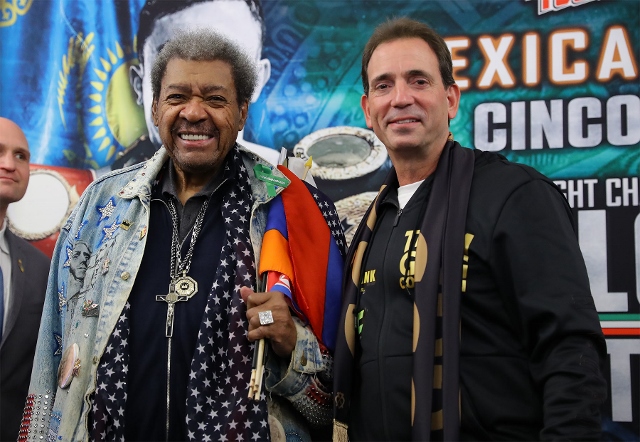 The Armenia-born Martirosyan (36-3 with one drawn and 21 knockouts) weighed in slightly lighter than Golovkin at 159.6 pounds.

Bookmakers have made Golovkin a short-odds favorite against Martirosyan, whose last fight came roughly two years ago and ended in a unanimous points defeat to Erislandy Lara.

Although Golovkin middleweight belts include the World Boxing Association, World Boxing Council and International Boxing Federation versions of the title, only the WBA and WBC belts will be on the line on Saturday.